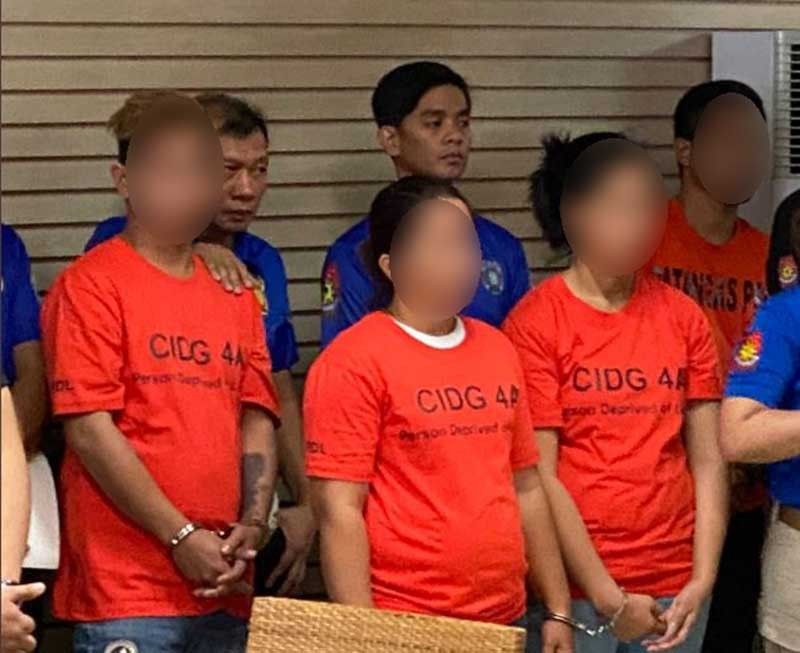 MANILA. The suspects in the killing of former congressman Edgar Mendoza are presented during a media briefing in Camp Crame on January 23, 2020. (Photo by Third Anne Peralta-Malonzo)

Coronel said Sanchez was the brains behind the killing of Mendoza, who had served as his legal counsel until he was convicted of murder in 2015.

Sanchez allegedly started plotting Mendoza’s execution after the latter failed to fulfill his promise to release him from jail. Mendoza had allegedly asked for millions of pesos as payment for services rendered, Coronel said.

Sanchez then tapped Fajardo, with whom he had developed a friendship inside the NBP, to help him with his plan.

Fajardo then allegedly contacted his wife Jael to carry out the plan.

Based on their investigation, the CIDG chief said the suspects lured Mendoza to meet with them for the payout.

Before Mendoza went missing, his family told the police that he was supposed to meet a client in Calamba City in Laguna.

Coronel said Mendoza’s driver left his driver’s license at the guardhouse of the Villa La Prinza Subdivision in Calamba before they were allowed to enter the gated subdivision.

The guard’s logbook showed that Mendoza’s vehicle entered the subdivision at around 1:03 p.m. of January 8.

Closed circuit television (CCTV) footage in the area showed Mendoza, along with his driver Nicanor Mendoza and bodyguard Ruel Ruiz, going inside the house located at Block 14, Lot 21, which is owned by Jael.

After receiving text messages telling her she will be paid for her participation in the killing, she voluntarily surrendered to the police, out of fear for her life.

She then started spilling the beans and tagged other people involved in the crime.

Based on Fernandez’s account, she and Palermo served coffee mixed with sleeping pills to Mendoza and his companions.

When the victims fell asleep, Acuña fetched Balbastro and Mercado from a nearby convenience store.

Balbastro and Mercado carried the sleeping victims to their vehicle, hit them with hard objects and stabbed them until they died.

With Balbastro at the wheel, he and Mercado took the vehicle with the bodies inside to a secluded area in Quezon province. Along the way, they bought gasoline.

The vehicle and the three men inside were torched in Tiaong, Quezon.

“When the victims were being transported to Tiaong, Quezon where their bodies were burned, they were already dead,” said Coronel.

Of the five suspects, including Jael, only Mercado remains at large. All five are facing three counts of murder filed by the CIDG before the prosecutor’s office of the Department of Justice.

Daro said they were still verifying the participation of Jael, who had denied having a hand in the crime.

“By our own parameters on crime solution and crime clearance, this case is considered solved and is now elevated to the prosecution arm of the justice system,” he said. (SunStar Philippines)