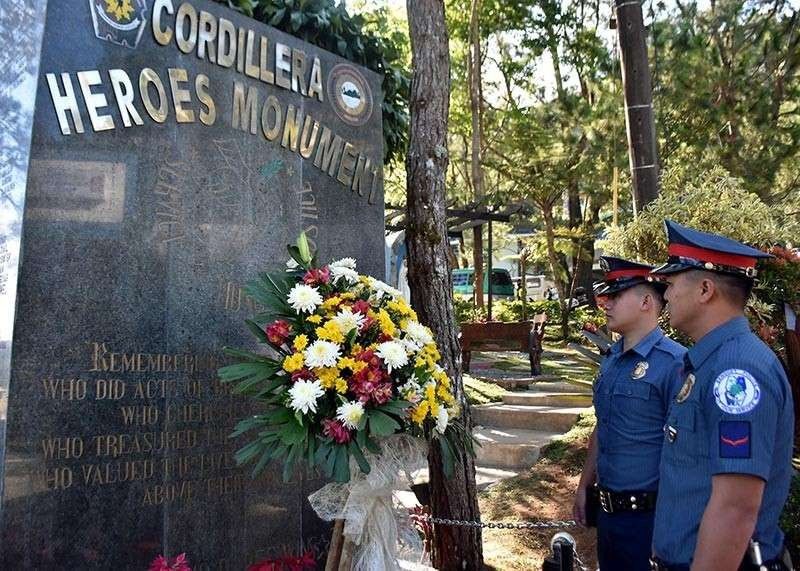 BAGUIO. In this file photo, siblings Police Officers 1 Alchin and Rogdan Tabdi remember the heroism of their brother, Chief Inspector Gednat who was among the 44 PNP Special Action Force heroes at the Mamasapano encounter during the wreath laying ceremony at the Bado Dangwa, exactly four years since the ill-fated incident occurred. Tabdi is among 14 Cordillerans who sacrificed their lives. (Redjie Melvic Cawis)

THE officers and men of the Police Regional Office–Cordillera (PRO-COR) continues to mourn the loss of 14 Cordillera members of the elite Special Action Force (SAF) of the Philippine National Police (PNP) who were killed during the bloody Mamasapano encounter five years ago.

Police Brigadier General Israel Ephraim Dickson, PRO-COR director, said the SAF 44 embodies the bravery and heroism which epitomizes their sacrifice in service to the country and in defending the constitution.

“Considering that most of those members of the SAF 44 came from this region, it is only fitting for us to commemorate their heroism and bravery,” Dickson said.

“I have high regards for SAF troopers because they are an elite unit of our Philippine National Police and we are hoping that this set back which killed the lives of 44 would serve as an inspiration for us to continue to work as members the PNP,” he added.

A Hero’s Monument indicating the ranks and names of the 14 members of SAF 44 coming from the Cordillera Regional Command were installed at Camp Bado Dangwa by then regional director and now Retired Major General Rolando Nana.

“These 44 members of SAF, 14 of which came from Cordillera should be the epitome of those who lost their lives for peace not only here in Luzon but for Mindanao and the Vizayas as well,” Dickson added.