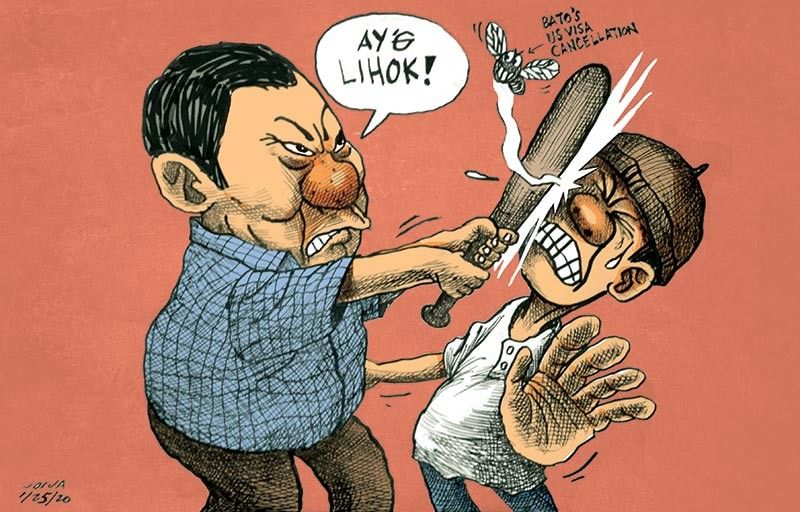 PRESIDENT Rodrigo Duterte has been known to give knee-jerk reactions, obviously not well-thought-out, to certain issues.

His supporters say it is part of his management style and charisma. He is passionate, transparent when he is mad and decisive to a point where he fails to consider the impact of his statement.

It was typical of Duterte then to issue a threat to cancel the Visiting Forces Agreement (VFA) between the Philippines and the United States if Washington would not reconsider the cancellation of Sen. Bato dela Rosa’s US visa. Duterte gave the US one month to act.

Duterte said in a speech Thursday, Jan. 23, 2020: “I’m warning you, this is the first time. Kapag hindi ninyo ginawa ang correction diyan, one, I will terminate the Visiting Forces Agreement. Tapusin ko ‘yang (expletive) na ‘yan. I am giving notice and they begin to count. I am giving the American government one month from now.”

The VFA is a pact signed in 1998 that allows both American and Filipino military personnel to do joint training exercises in the Philippines.

Duterte wants a barter. The continued effectivity of the VFA for a US visa for dela Rosa. Such an unusual barter because the values are uneven — an individual’s visa for travel to the United States for an agreement of two nations to benefit both their citizens.

One part of the barter is to allow dela Rosa to go on vacation plus a bit of work in the US and the other part of the exchange is to beef up the security of two countries.

Not only is this exchange of the VFA for one visa unusual, it is unbelievable and unpatriotic.

What will dela Rosa do in the US? Visit family and friends then squeeze in some work such as connect with Filipinos there. He cannot do much as a Philippine senator there. Are we willing to have that in exchange for losing the chance to improve security capabilities against foreign threats?

Word first got out in December 2019 about the American legislators’ decision to bar foreign government officials from entering the United States if they were involved in the “wrongful imprisonment” of Sen. Leila de Lima, a staunch Duterte critic.

Duterte’s reaction that time was to bar from entry to the Philippines two US senators behind the US ban. That was a reasonable counter because the values were the same — a visa for a visa.

You do not cancel a bilateral pact because one person was not allowed to go to the US. You cancel a pact for a much bigger reason.