A FORMER police officer who was relieved from his post in 2018 for extorting money at the Mactan-Cebu International Airport when he was still part of the PNP Aviation Security Group - Central Visayas (ASG 7) was arrested on Thursday, Jan. 23, 2020 for again extorting money, this time from a police applicant.

Ex-police corporal Carlito Luage Donque Jr., 36, was arrested during an entrapment operation conducted by members of the Regional Intelligence Division 7 at 1 p.m. after a police applicant from the town of Barili, southern Cebu, complained that Donque asked for P40,000 in exchange for a guaranteed slot in the police force.

Donque, a resident of Deca Homes 4, Barangay Bankal, Lapu-Lapu City, introduced himself to the applicant as a police lieutenant. He then bragged that he could have police applications approved because he had access to the Police Regional Office (PRO) 7 using his name.

“He asked for money and assured the applicant that he would take care of his papers so that he could take the oath as policeman despite the fact that there are several other police applicants,” PRO 7 deputy director for administration Brig. Gen. Domingo Cabillan said in a mix of Cebuano and English.

After reporting the matter to PRO 7, the applicant was instructed to arrange with Donque an initial payment of P10,000 and promise to pay the balance of P30,000 as soon as the applicant is accepted into the service.

The downpayment was sent by the applicant via money transfer and picked up by Donque. As soon as he got hold of the money, Donque was arrested by police operatives who were already there waiting for him.

Based on initial investigation, this was not a first for Donque as another police applicant also claimed to have given the ex-cop P10,000 as payment for “processing” his documents.

Donque reportedly used Facebook to chat with his would-be victims who numbered around seven applicants, according to police.

However, police remained uncertain if the other applicants were able to pay Donque.

A case of robbery with extortion will be filed against the ex-cop.

Donque was once assigned to ASG 7 at the Mactan-Cebu International Airport (MCIA).

Last July 2017, he accosted a businesswoman at the MCIA for allegedly carrying a bullet in her suitcase.

In exchange for letting her go without an arrest, Donque allegedly asked the woman-traveler for a huge amount of money.

The incident was believed to be part of a bullet planting scheme known as “Tanim Bala” (plant bullet) done by airport security personnel as a means of extortion.

The woman later turned out to be a good friend of a Davao City official who called for an investigation on the matter.

But police said Donque no longer reported to ASG for work after he was called for investigation. He was relieved in October 2018 for going Awol (Absent Without Official Leave).

Meanwhile, 250 new cops in the region will take their oaths next week after passing all the requirements of PRO 7. (AYB, RHB) 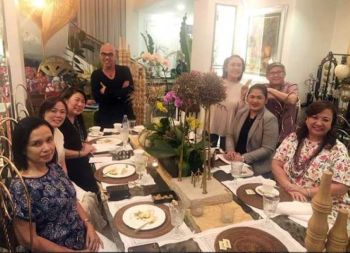