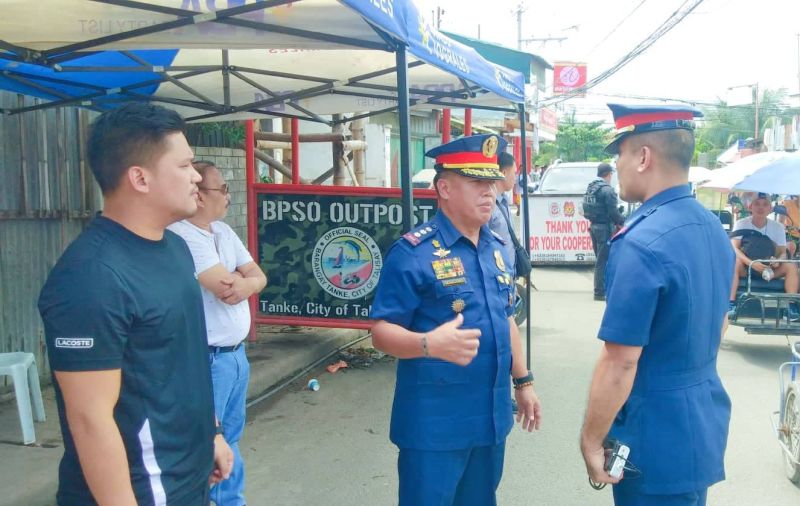 Aside from conducting buy-busts, the Talisay City Police Station also sought assistance from the Regional Mobile Force Battalion (RMFB) to implement non-stop checkpoints at the entry and exit points in Barangays Tanke and San Roque as these two villages had been identified as havens of illegal activities, including drug trafficking.

These efforts are part of Oplan Limpyo Talisay, an ongoing police program against illegal activities in the city.

The city was mentioned as a drug-infested place by President Rodrigo Duterte during his Sinulog speech at the Cebu City Sports Center last Sunday, Jan. 19.

In a 2018 visit in Cebu, Duterte also mentioned Talisay City in his speech after urging members of the League of Municipalities of the Philippines Visayas Island Cluster to fully enforce the law and raise the bar in governance, especially in the fight against illegal drugs.

In the latest Oplan Limpyo Talisay, the operatives seized 106 grams of white crystals believed to be shabu worth P720,800. Thirteen of the arrested pushers had been tagged as high-value targets (HVT), Talisay City police chief P/Maj. Gerard Ace Pelare said.

Twenty-year-old Joma Obrero, an HVT, yielded P152,320 worth of shabu after his arrest in Barangay Lawaan 3. Pelare said Obrero is part of the “notorious” Obrero family of drug pushers in Talisay City. Obrero’s mother and three siblings were among the 46 pushers caught during the Oplan Limpyo Talisay drive last Jan. 11.

In a separate interview, Obrero denied he was involved in the drug trade, saying he was fixing his motorcycle when the police caught him.

Another HVT, Jojie Pulgo, was also caught in Lawaan 3, yielding P241,060 worth of illegal drugs.

Pulgo, a butcher at the city abattoir, denied the illegal drugs recovered from him were his. However, he admitted using drugs to keep him awake and cope with his work. Still in Lawaan 3, the police caught HVT Jericho Anna Bacalso and seized P72,080 from him.

The suspect admitted he started selling illegal drugs seventh months ago after he was fired from his job, and he said he earned only P1,800 for the 15 sachets of shabu he sold to junkies.

Mariano said he will coordinate with the Cebu City Police Office as most of the supplies of illegal drugs in Talisay City came from Cebu City.

The police official said 30 RMFB personnel were deployed to Tanke and San Roque as a way to deter drug sellers from conducting transactions with their customers. The mobile force officers started their checkpoints last Wednesday, Jan. 22.

Vowing support to the police, Talisay City Mayor Gerald Anthony Gullas Jr. thanked the operatives for their non-stop anti-narcotics operations in the city.

Aside from the Talisay City Police Station and the RMFB personnel, operatives of the Philippine Drug Enforcement Agency, Provincial Intelligence Branch and the Highway Patrol Group also joined in the Oplan Limpyo Talisay. (FMD, JKV)