Cebu United, DBTC B face off in B14 final 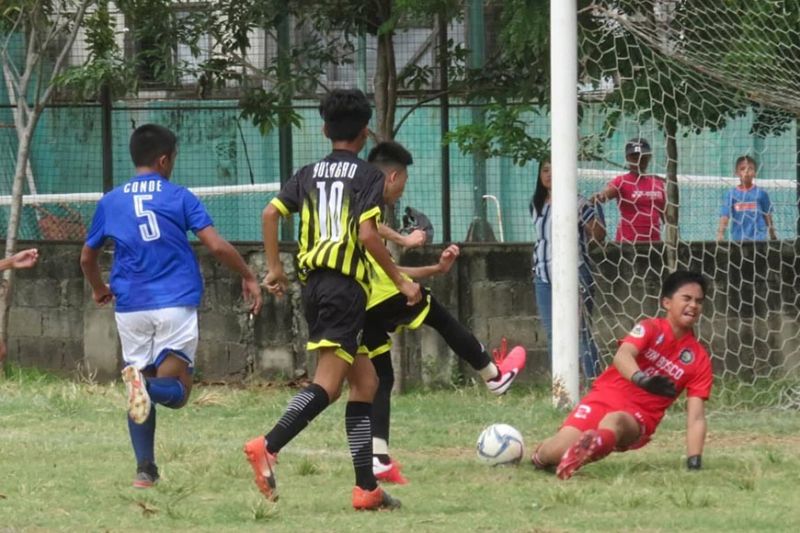 ONE-SIDED. A player from Cebu United tries to get past the Don Bosco Technical Center keeper during the team’s 3-0 win in the Boys 14 semifinal round. (SunStar photo / Allan Cuizon)

FAVORITES Cebu United ended the run of Don Bosco Technical Center A with a one-sided 3-0 win in the semifinal round of the Boys 14 Division of the AboitizLand Football Cup at the San Roque Parish Football field.

Cebu United didn’t waste time and got the first goal in the fifth minute before DBTC tightened its defense. In the second half, Javi Sian doubled the lead in the 56th before Cebu United got the final goal in the 59th.

Cebu United, which has now won all its six games, will take on DBTC B in the finals next Sunday still at the San Roque Parish Field.

DBTC B, which suffered its lone loss in the group stage to Cebu United, outlasted Group A No. 1 Ateneo Magis, 1-0, thanks to a goal by Nathan Lingatong in the 48th minute.

Meanwhile, in the other Boys 14 game which was non-bearing, KNF Ferraren nabbed its second win of the season with a 5-2 rout of Cebu Sherilin.

The games in the Boys 16 and Boys 18 Division at the Sacred Heart School-Ateneo de Cebu were called off due to the condition of the field.

Meanwhile, in the 45-Above Division on Jan. 26, KNF United hopes to extend its winning streak when it takes on Abellana National School Alumni; Erco FC will face Queen City at SHS-Ateneo; and DB Alumni will face off with Mi Amigos.

Also in Ateneo, DBTC A will face off with Lapu-Lapu FC in the Boys 16 Division, while Erco DB will take on CK FC in the Men’s Division 2. (ML)