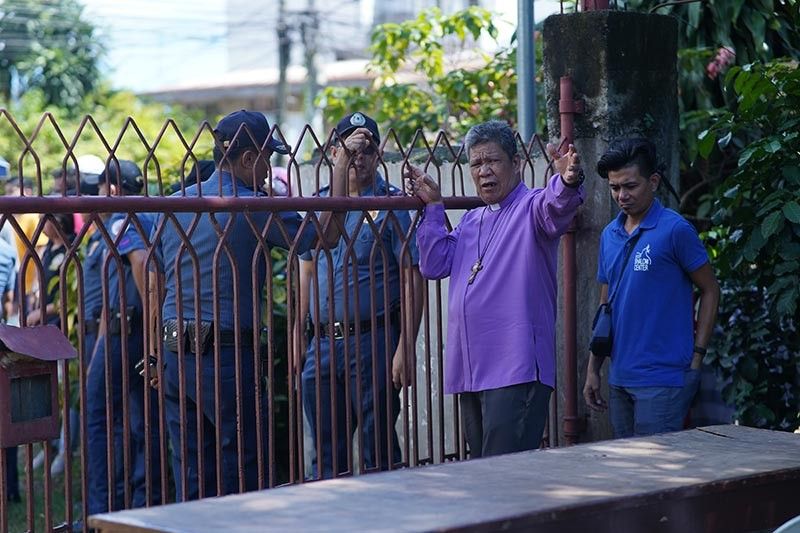 TENSION broke out at the United Church of Christ in the Philippines (UCCP) Haran Center in Father Selga St. on Saturday, January 25, after some group tried to break in and rescue Lumads who have been staying in the center.

Pasaka vice chair Datu Mentroso Malibato said the group broke in at 9:20 a.m., breaking the wall that separates the UCCP Haran office and the evacuation center.

The incident happened days after the Regional Peace and Order Council-Davao Region (RPOC-Davao) approved on January 15 a resolution seeking the immediate closure of the center, which has been serving as temporary shelter for the Indigenous Peoples (IPs) from various provinces since early 2015.

According to the resolution, the “security sector has recorded violations of Indigenous People’s (IPs) rights, child abuse, child trafficking, exploitation of the IPs for terroristic activities were committed inside the facility.”

The Davao City Police Office, led by its chief Kirby John Kraft, responded after receiving a report that members of the Alamara group broke inside the center and ruined some portions of the area.

He said Alamara members came from the areas of Kapalong and Talaingod in Davao del Norte, wherein some of them have family members and relatives who are inside the center.

Kraft said the police were immediately deployed outside the center “to maintain the peace and order” of the area.

A lockdown was implemented in front of the center, barring those inside from coming out. Even members of the media were not allowed to go inside the Haran gate.

“The reason why we barred the camp was because we do not know the situation. Baka magkagulo (A riot may arise),” Kraft said.

In a dialogue with UCCP Southeast Mindanao Jurisdiction Area Bishop Hamuel Tequis, the police official said Tequis is awaiting the decision of the tribal leaders of the two camps to address the situation.

Tequis, meanwhile, said they were surprised by the incident. He said the children staying at the evacuation center immediately ran towards the bishop’s office.

“Hindi katanggap-tanggap ang ginawa nila kasi may nangyaring muntikang hacking sa mga bata (What they did was unacceptable. There was an almost hacking of the children),” the bishop said, adding the children were “traumatized” by the incident.

The bishop, meanwhile, denied claims they barred the evacuees from leaving the Haran center.

“Wala’y ingon ana ang UCCP Haran. Ang gusto muuli, muuli. Ang gusto magpabilin, magpabilin (We don’t do that in the UCCP Haran. Those who want to leave can leave. Those wanted to stay can stay),” Tequis said in the afternoon.

Malibato said that Alamara, which they called a “paramilitary” group had previous cases of harassment to some Lumad in the hinterland areas of Davao del Norte, resulting to their evacuation in the center in 2015.

Gloria Arcenas, volunteer teacher of Haran, said the past two years were peaceful.

She said the incident was very “discouraging” as it would affect the learning of the children.

The city steps in

Davao City Vice Mayor Sebastian Duterte arrived at the center, along with Councilor Pamela Librado-Morato, late afternoon Saturday, to mediate in the dialogue between the two camps.

“Nag-mediate lang ko to make sure na dili magkagubot ang mga negotiation. Naa’y gamay’ng tension pero luckily wala ma’y samdan. Peaceful ang tanan (I mediated their talks to make sure there won’t be clashes in the negotiation. Although there were some tensions. Luckily, no one was hurt. It all resulted peacefully),” Duterte said.

The vice mayor said both camps would have to sit again to discuss the matter.

As to the agreement whether the evacuees would be sent back home, he said there was none for now. But he said the dialogue “opened a channel” between the two camps to discuss.

Tequis said datus of both camps were well after the negotiation.

The bishop said they will set an appointment with Davao del Norte Gov. Edwin Jubahib and Davao City Mayor Sara Duterte-Carpio to discuss the RPOC resolution.

He said the lockdown had somehow helped ease the situation. As to the possibility of lifting it, he said it would still be up to Kraft.

“Basta ang resulta, maayo lang (As long the result would be beneficial),” he said.