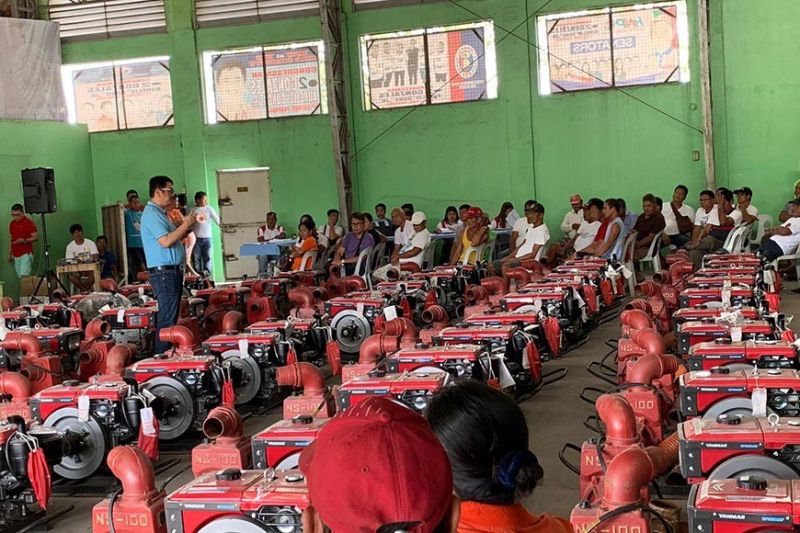 CITY OF SAN FERNANDO. Third District Representative Aurelio "Dong" Gonzales Jr. stresses a point during the distribution of shallow tube wells to farmer association and cooperatives in his district over the weekend. (Photo by Ian Ocampo Flora)

The distribution of shallow tube wells was possible through a partnership with the National Irrigation Administration. The pieces of equipment were distributed during simple ceremonies at his district office in the City of San Fernando.

Gonzales said the equipment will greatly help in the farm cycle of farmers of the said district.

“This would enable our farmers to have ample supply of water all throughout the cropping seasons,” Gonzales said.

Gonzales also pledged to further capacitate farmers in the district with more farm equipment and support.

He said the farm machineries would also cut pre-planting and land preparation time as well as expedite the harvest process.

“The farmers of the district are very close to my heart. Helping local farmers improve their production and lessen farm input costs enable farmers to earn more and improve their standard of living,” Gonzales said.

Gonzales said he is keen in providing machineries and equipment which are intended to improve farmer productivity and reduce post-harvest losses.

The lawmaker said that since his return to public office, he had facilitated the distribution of farm implements and machineries to farmers of the third district.