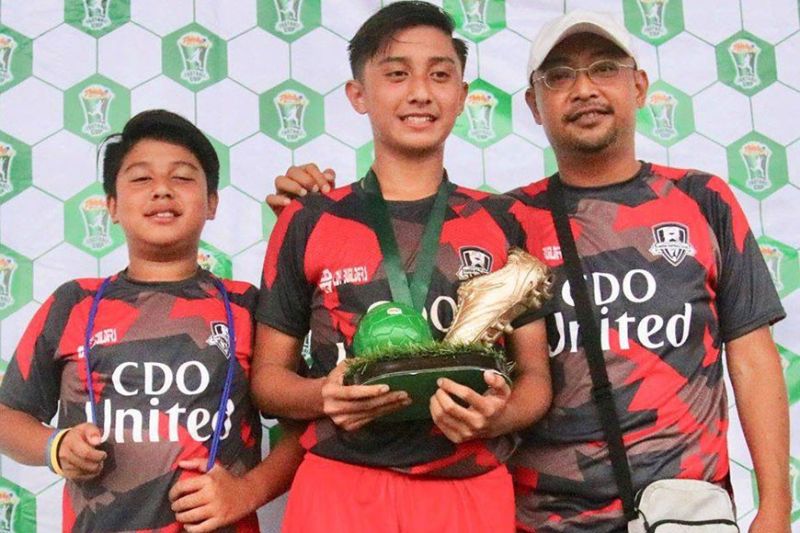 CAGAYAN DE ORO. JL Cascara (at center) with his father Jeff and younger brother Mamat, when they won the Boys 14-under title during the Thristy Cup in Cebu in 2018. The former Rosevale standout now plies his talent with De La Salle Zobel in the UAAP. (Photo by Jack Biantan)

JL Cascara now plays for De La Salle Zobel in the UAAP while Sam Salingay, and Val Alvin Orate are teammates at San Beda University and play in the NCAA. The trio were recruited in 2019 and have already played matches for their respective teams.

JL Cascara, now a Grade 10 student at De La Salle Zobel, learned to play football at a very young age at Rosevale School and has represented the Comets in various local and national tournaments. The son of businessman Jeff Co Cascara, JL Cascara also played for Northern Mindanao Elementary Boys football team in the Palarong Pambansa in Albany Bicol in 2016.

Val Alvin Orate, on the other hand, was recruited also last year by San Beda University. He studied in Malaybalay City, Bukidnon during his elementary days and was a teammate of JL Cascara in the 2016 Palarong Pambansa in Albay. He studied in Rosevale School during his Grade 7 and Grade 8 before he was recruited by San Beda. The son of civil servant Yves Tapalla of Malaybalay Bukidnon, Val Alvin is also teammate of another Ex-Rosevale player Sam Salingay in San Beda.

Salingay, son of Jimmy and Desiree Salingay of Gingoog City, played for Rosevale School for one year in 2017-18 where he led the school to the Elementary Boys football team Cagayan de Oro Division title. He was part of the core of the Rosevale School boys which represented Region X to the Palarong Pambansa in Vigan, Ilocos Sur. The Rosevale boys which saw action in Vigan included Rawin Gementiza, Andy Lugod, John Quinito, Vince Manubag, Jared Tan and Mamat Cascara.

Sam, at only 14 years old and in Grade 8, was also signed by San Beda in 2019. He moved to Corpus Christi School after playing one year for Rosevale.

When the 15th Rosevale Cup kicks off on Saturday, these three outstanding lads will be missed. They played many years for Rosevale School but now they are on different levels.