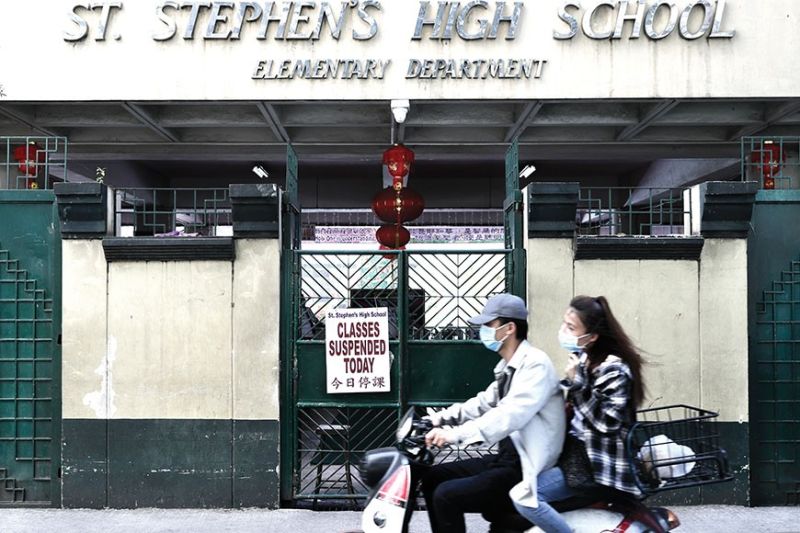 SCHOOL CLOSED. People wearing face masks pass by a Chinese-Filipino school that suspended classes in Manila on Monday, Jan. 27, 2020. Several Chinese-Filipino schools in the area suspended classes as a precautionary measure amid the threat of the 2019 novel coronavirus after the Chinese New Year holiday. The Department of Health says there is no confirmed case of 2019-nCoV in the Philippines. (AP Photo)

HEALTH Secretary Francisco Duque III on Monday, Jan. 27, 2020, said 11 foreign nationals have been under investigation for the 2019 novel coronavirus (2019-nCoV).

One of the patients, a five-year-old Chinese boy from Wuhan, was discharged from the Vicente Sotto Memorial Medical Center (VSMMC) Friday evening, Jan. 24, shortly after he was cleared of the 2019-nCoV infection by laboratory test results from the Victoria Infectious Diseases Reference Laboratory in Melbourne, Australia.

But the 10 others are still confined in various hospitals across the country including two more cases in Cebu, the DOH national report said.

Duque, in a broadcast aired by Radio-TV Malacañang, said an 18-year-old girl is still in isolation at the VSMMC while a 61-year-old woman is at the Allied Care Experts (ACE) Medical Center, both located in Cebu City.

Aside from these two cases, there are three patients under investigation (PUIs) in Kalibo, Aklan; one in Tacloban City, Leyte; two in Metro Manila, one in Palawan and one in Camiguin.

Duque said the PUIs are Chinese, Brazilian, American and German nationals with a history of travel to Wuhan City in China, ground zero of the 2019-nCoV outbreak.

Interviewed by SunStar Cebu, DOH 7 Director Jaime Bernadas confirmed the confinement of the 18-year-old girl but said he has not received information about a 61-year-old woman.

“We have an 18-year-old girl at the VSMMC, but she’s not under investigation. She is classified under suspected case,” Bernadas said.

Bernadas explained that persons classified under suspected case are those that have travel histories to China, particularly Wuhan, in the past two weeks and have manifested signs of respiratory illness such as fever, cough and colds; while PUIs are those with a high suspicion level for the 2019-nCoV and need confirmation from the lab in Australia.

“Please be informed that ACE Medical Center Cebu is not yet operational. We are on the process of getting our full occupancy permit from the (Cebu) City Hall. We have no admitted patients yet,” Co told SunStar Cebu in a text message.

As of Monday afternoon, Bernadas said there are four Chinese nationals tagged as suspected cases in Central Visayas.

Three of these patients, including the 18-year-old girl, are in Cebu City while the other patient is in Bohol.

Bernadas begged off from disclosing details on the other two patients in Cebu City to protect their privacy.

“They are already cleared of any respiratory illness, but we’re just waiting for the results from the RITM (Research Institute for Tropical Medicine),” Bernadas said in a mix of Cebuano and English.

As this developed, a message spread across Facebook claimed that five Chinese nationals from Wuhan arrived at the emergency room of Cebu Doctors’ University Hospital in Cebu City and were isolated.

Bernadas said there was no such incident recorded by the DOH 7.

In an advisory issued last night, DOH reiterated that, to date, there are no confirmed cases of 2019-nCoV in the Philippines.

“DOH also calls on the public to be responsible and refrain from sharing unverified information,” said the DOH advisory posted on Facebook.

DOH assured that it is “on top of the issue and will regularly update the public through its official channels.”

As more and more people have taken to wearing surgical masks to prevent the spread of viruses, local pharmacies and stores have run out of the protective gear.

Bernadas advised that if masks are no longer available commercially, the public can sew their own using cloths, handkerchiefs or face towels.

Gov. Gwendolyn Garcia has met with officials of the Provincial Health Office, DOH 7, Bureau of Quarantine, port authorities and major hospitals in the province.

The governor said results of their closed door meeting will be the bases for an executive order (EO) which will be issued on measures to guard against coronavirus.

Just like the EO she issued against the African swine fever, Garcia said the coronavirus measure will also be backed up by a provincial ordinance.

“That much I can give you as of the moment because I need to proceed with this in a most cautious and deliberate manner,” she continued.

The governor will meet again with these agencies and Chinese Consul General Jia Li at the Capitol on Thursday, Jan. 30. She also invited the Bureau of Immigration, Cebu Alliance of Tour Operations Specialists, Philippine Coast Guard and the Philippine National Police to the next meeting.

For now, Garcia wants to focus on strengthening measures at the pre-entry and entry levels of tourists coming to Cebu as well as the tourists’ stay in the province.

She asked GMR Megawide Cebu Airport Corp. to set up a system that will ensure that passenger health declaration cards are thoroughly reviewed before they are allowed to leave the premises of the Mactan-Cebu International Airport (MCIA).

Garcia also urged passengers to “honestly and faithfully” fill out their health cards or face sanctions that will be imposed once a provincial legislation on the matter is passed.

The Cebu Port Authority, for its part, began preparations for the emergency procurement of thermal guns (spot pyrometers) which will be distributed to 16 seaports in the province.

Garcia said it was best to purchase thermal guns instead of thermal scanners since it was cheaper and would be available in less than 30 days, the average procurement period for a government agency.

A thermal gun costs P7,000 per piece while a thermal scanner costs around P1.2 million.

Hotels and resorts were also urged to subject their guests, regardless of nationality, to a daily temperature check.

The Hotel, Resort and Restaurant Association of Cebu (HRRAC) now requires its 100-member hotels to purchase a thermal gun to determine a person’s temperature, and it encouraged members to provide a dedicated isolation room.

In case of a suspected case, hotel staff will house the guest in the isolation room and will immediately contact the DOH for assistance in getting the guest to a hospital for confirmatory tests.

Currently, Bai Hotel in Mandaue City has two thermal guns in the entrance lobby that have been used since Thursday, Jan. 23.

The common signs of coronavirus infection include respiratory symptoms, fever, cough, shortness of breath and breathing difficulty. In severe cases, it can cause pneumonia, acute respiratory syndrome, kidney failure, and even death.

As this developed, Philippine Airlines (PAL) and Cebu Pacific issued separate advisories to their ticket holders who have scheduled flights to different parts of China.

PAL passengers with confirmed tickets issued on or before Jan. 24, 2020, for travel on Jan. 24-Feb. 29, 2020, may request for rebooking, rerouting or refund with waiver of penalties.

Cebu Pacific passengers with flights booked on or before Jan. 24, 2020 and traveling until Feb. 29, 2020, may also avail of the following options, free-of-charge: rebook flights (new flight date within 30 days of original travel date); refund tickets in full; or store the value of the ticket in a travel fund for future use.

For now, the City Health Office (CHO) only has less than 20 PPE for its workers, while barangay health workers have none, revealed Cebu City Councilor David Tumulak, chairman the City’s committee on public order and safety.

“Cebu City is not 100 percent ready because we lack in terms of PPE, masks and an education campaign on how to prevent this airborne virus,” said Tumulak.

There are 400 CHO workers in Cebu City and around 800 barangay health workers. (RTF, JJL, JOB with a report from SunStar Philippines)