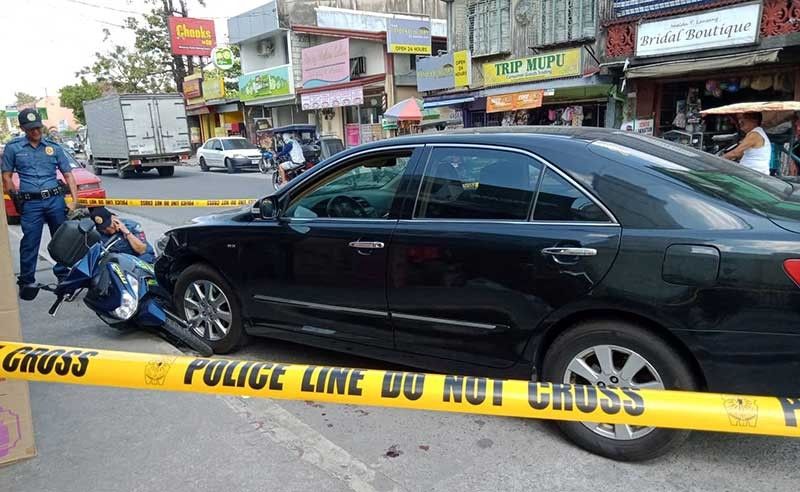 PAMPANGA. Police check on the vehicle of a lawyer who was ambushed and killed along with his driver in Sta. Rita town on Tuesday, January 28, 2019. (CLTV36 Photo)

A LAWYER and his driver were killed in a shooting incident in Sta. Rita, Pampanga on Tuesday morning, January 28.

The Sta. Rita Police said in a report that lawyer Anselmo Carlos and his driver Marcial Mendoza were shot in front of the San Vicente Chapel along the Porac-Guagua Road in Barangay San Vicente at around 9:10 a.m. Tuesday.

Both died instantaneously from several gunshot wounds to their heads and bodies. The assailants fled on board a motorcycle.

Carlos was reportedly a prospective mayoralty candidate for Floridablanca town in 2013.

He figured prominently in several land dispute cases in Central Luzon region. He was allegedly a lawyer for LLL Holdings in the Hacienda Dolores land dispute in 2013.

Police said Carlos and Mendoza had come from a court hearing at the Hall of Justice in nearby Guagua town. They were on their way home when they were attacked.

When they reached the chapel, three men approached their vehicle on foot, knocked on the window and fired at them.

The Integrated Bar of the Philippines (IBP) was quick to condemn the murder of the said lawyer.

“We are shocked and saddened that one of our members has been added to the growing number of lawyers falling victim to senseless killings. Once again, rule of law has been attacked. We call on law enforcement authorities to make a swift action to bring to justice the perpetrators of this dastardly act and to exert all efforts in trying to put a stop to the killing of lawyers,” the group said in a statement posted on their website.

Recovered from the crime scene were empty bullet shells from caliber .45 pistols.

Investigators are looking into the motive behind the killing. (SunStar Philippines)