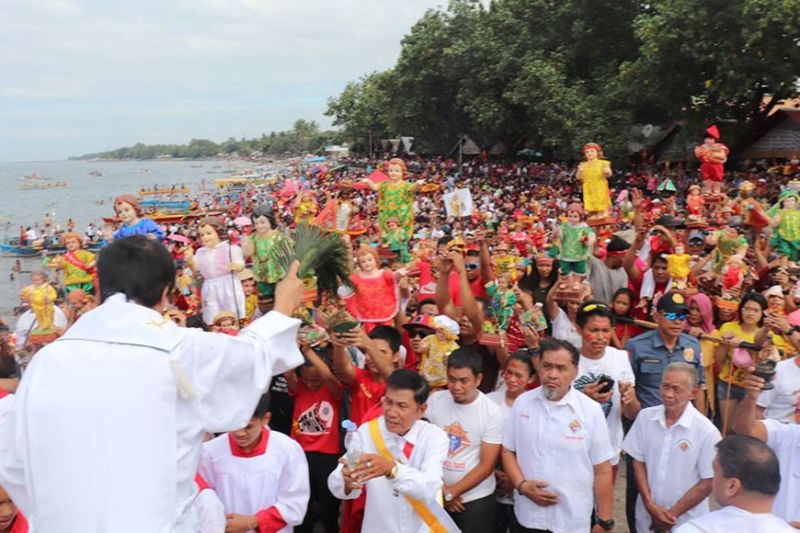 MISAMIS ORIENTAL. Balingasag town was in festive mood from January 10 to 20, as its people showed unity and gratitude to their patron saint. (Joan Sablad)

THOUSANDS of devotees of Señor Sto. Niño have gathered in Balingasag town, Misamis Oriental, as they joined in the festivities of the town's version of the Sinulog Festival.

With the theme: "Batang Balaan Tinubdan ug Sumbanan sa Tinuoray nga Panaghiusa ug Kalinaw alang sa Kalamboan," the whole town was in festive mood from January 10 to 20 as they showed unity and gratitude to their patron saint.

"This is our way of expressing our gratefulness to the Holy Child, expressing our thanksgiving of the many gifts and favors that we enjoy," Balingasag Mayor Alexis Quina said.

Several activities were participated by different barangays and schools of Balingasag, like the sports tournaments, Sights and Sounds, Women's Night, Balingasag MotorCross, IPs Night, and Balingasag Star, among others.

There are also the highlight events, such as the Miss Balingasag 2020, 9th Pasalamat Festival and the Sakay Sakay 2020.

"Sakay Sakay" is a form of devotion to Sto. Niño for the grace and abundance it showered to the people of Balingasag.

Crowned as Miss Balingasag 2020 was Jeany Roa of the Association of Barangay Council. First and second runners-up were Cezarah Jireh Silapan of Barangay Mambayaan and Cejay Diane Domo of Barangay 1-Poblacion, respectively.

Meanwhile, declared as the 9th Pasalamat Festival champion was the Misamis Oriental Institute of Science and Technology. It also bagged several awards such as Best in Costume, Best in Musically, Best in Choreography, and Best in Street Dancing.

According to Cecille Abao Galdo, the municipal tourism officer of Balingasag, the town is celebrating two festivals in January, namely: the 9th Pasalamat Festival and the Diyandi Festival.

Galdo said it was through these two aforementioned festivals that the tourism industry in Balingasag has improved, especially as the number of tourists visiting the municipality has increased.

She also said that almost, if not all, hotels and vacation houses were fully booked due to the influx of people joining in the festivities of the town.

The town spent more than P1 million for the celebration of the two festivals of Balingasag, according to Galdo, and they are planning to increase it to make the festivities bigger and grander.

The Balingasag mayor, for his part, expressed his gratitude to everyone who participated and those who became a part of the success of the celebration.