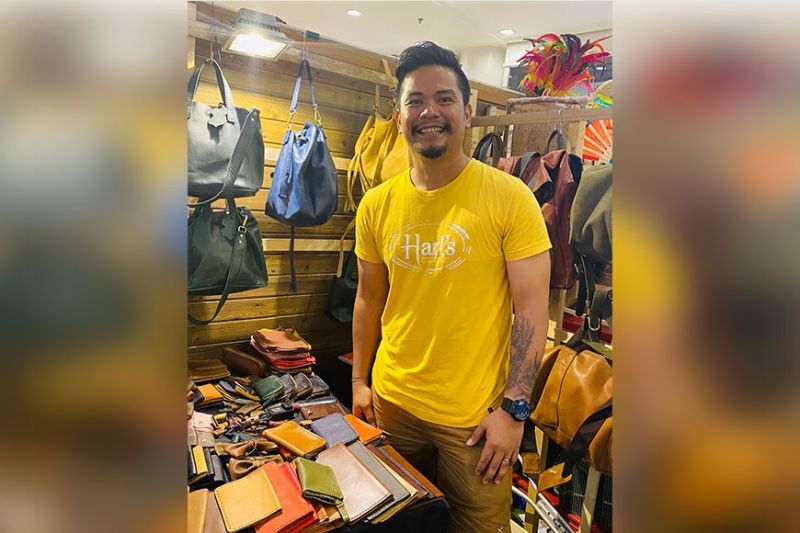 BUSINESS WITH A HEART. Harley Dave Beltran has bigger dreams for the people who are behind the success of his business. This social entrepreneur says he now knows the new meaning behind Harl’s—Hope for the PWDs, turning disability into Ability, Resilience, Livelihood and growing together in the Spiritual journey. (Sunstar Photo / Katlene O. Cacho)

A LAGUNA-BASED leather shop that sells genuine and handcrafted products is eyeing to expand to Cebu this year to bring its advocacy of giving livelihood to persons with disabilities (PWDs).

Harley Dave Beltran said he already saw an area along General Maxilom Avw., Cebu City to put up Handcrafted by Harl’s (Harl’s), a leather business he started in 2014 in San Pedro, Laguna. He plans to set up a store where Cebuanos could buy genuine leather items from bags to wallets whose raw materials are locally sourced; and a training workshop where they could learn how to make these handcrafted items.

“I came to Cebu because I wanted to create change here. I want to inspire business owners to open opportunities to the PWD community,” said Beltran, a nominee for the 2018 Asean Business Awards for Sustainable Social Enterprise Category.

“There are already plenty of leather stores in Manila and I think that it is about time that we explore the markets of Visayas and Mindanao,” he added.

Beltran brought Harl’s for the first time to Cebu when he was invited to join a Sinulog trade fair inside Ayala Center Cebu. The fair runs until Jan. 31, 2020.

More than selling bags and other accessories, Beltran said coming to Cebu was an opportunity to expand his advocacy of providing employment to those deprived in the community either because of disability or lack of educational attainment.

“I’m not selling bags. I’m sharing their stories,” he said.

Harl’s currently employs about five PWDs. His first employee was a crippled man in a wheelchair who had zero skills about the craft.

“My vision before was to create a typical business model that will sustain my needs and also create a mainstream product that can compete in the market, with the traditional mindset of a businessman who is profit oriented. This changed after Ronald Polo became a part of my team. The typical ‘vision’ changed into a deeper and more meaningful ‘purpose’ of the company towards PWDs and less fortunate in the society. It also gave me a different view in life and how I wanted to empower and inspire others to also give equal and fair opportunities with zero exclusions,” he said.

Beltran said he found his purpose helping these people.

“My heart goes out for them because for one, they had no choice of their disability. And I wanted people to see them as able individuals,” he said.

Beltran described himself as “madiskarte,” the reason he was able to survive school. He worked as a janitor while juggling college studies. Unfortunately, he wasn’t able to finish his marketing management course.

“I just learned everything in the university of life,” he said.

Beltran had his first exposure in arts while working in Boracay Island in 2007, the place where he also met his wife. The couple moved to Manila where his wife resides.

In 2009, Beltran got involved in a leather business, where he handled the marketing aspect. Not so long after, he decided to break away and in 2014, he started his own business.

Joining trade fairs and bazaars hosted by the Department of Trade and Industry (DTI) and other organizations were Beltran’s ticket to be known in the retail sphere.

But what made Harl’s stand out were the stories behind the handcrafted items. His advocacy for PWDs caught the attention of the DTI and German-funded organizations like GIZ, among other organizations.

In 2017, Harl’s represented the Philippines in an international show in Germany where he also met several people who share the same cause.

A year after that, Beltran was invited to showcase Harl’s in the Manila Fame, one of the country’s famous creative shows, where he met DTI Secretary Ramon Lopez. He was then tapped by the DTI to become one of the mentors of the Kapatid Mentor Me program.

Asked how he is going to sustain the business with such model, Beltran said: “Patronize our products. Continue buying from us. That’s how we are going to help them keep their jobs.”