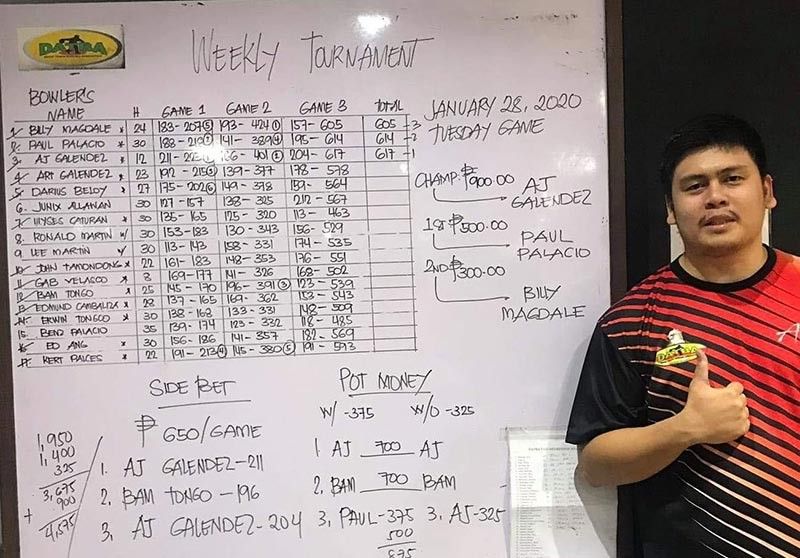 Galendez, who was third placer in the Datba Bowler of Year 2019 grand finals, added a feather on his cap by clinching the Datba Weekly Tournament title on Tuesday, January 28, at SM Lanang Premier Bowling Center.

Galendez, with a 12 handicap, toppled a total of 617 pinfalls after three games in the 17-player event, which was organized by the Davao Tenpin Bowlers Association (Datba) as qualifying for the monthly finals.

He prevailed over ABS-CBN anchor Paul Palacio and optometrist Virgilio “Billy” Magdale who grabbed the second and third sports, respectively.

Palacio struck for 614 pinfalls with a 30 handicap while Magdale, whose handicap is 24, rolled 605 pins.

Galendez received a cash prize of P900 while Palacio claimed P500 and Magdale had P300.

He bested Celso Garcia (20) and Joshua Disuacido (15) who finished second and third, respectively. Garcia garnered 594 pinfalls to take home the P600 runner-up prize while Disuacido scored 586 to settle for P300.

In the youth division, Shayne Libres also had her share of glory. She amassed 508 pinfalls to win the championship over Chad Tancontian (455) Marlon Bermudez (430). They also received cash prizes.