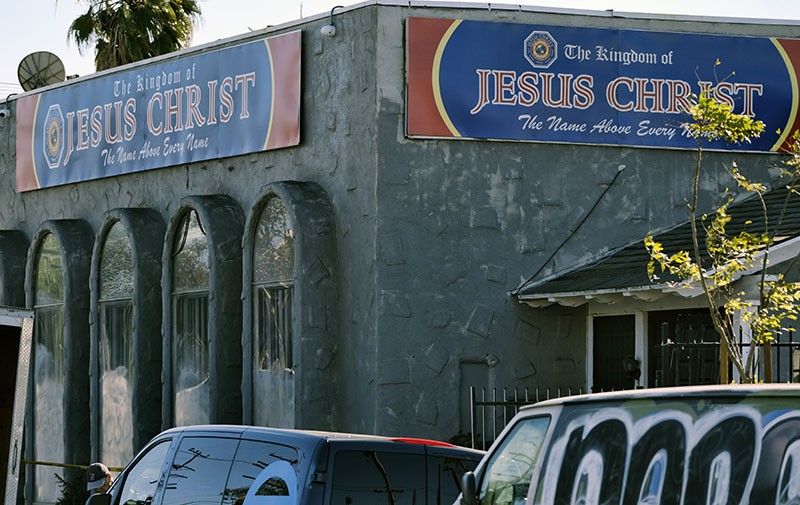 LOS ANGELES. The front of the Kingdom of Jesus Christ Church is seen in the Van Nuys section of Los Angeles on Wednesday, January 29, 2020. The FBI raided a Philippines-based church in Los Angeles to arrest leaders of an alleged immigration fraud scheme that resulted in sham marriages. Federal prosecutors said Wednesday that three leaders of the local branch of the Kingdom of Jesus Christ were arrested in morning raids. (AP photo)

LOS ANGELES — Federal agents raided a Philippines-based church in Los Angeles Wednesday, January 29, 2020, in a human trafficking investigation that led to arrests of three church leaders in what prosecutors said was a decades-long scheme to trick followers into becoming fundraisers and arrange sham marriages to keep them in the U.S.

The local leader of the Kingdom of Jesus Christ church was arrested on immigration fraud charges in the early morning bust along with a worker who confiscated passports of the victims of the scheme and another who handled finances, the U.S. attorney's office said.

Workers who managed to escape from the church told the Federal Bureau of Investigation (FBI) that they had been sent across the U.S. to work long hours soliciting donations year-round for the church’s charity and were beaten and psychologically abused if they didn't make daily quotas, according to an affidavit filed in support of the charges. Some described having to live in cars at truck stops.

The immigrants essentially became full-time workers, sometimes referred to as “miracle workers,” in a crusade to raise money for the nonprofit Children’s Joy Foundation USA, which was supposed to benefit poor children in their homeland. But the complaint said most of the money raised was used to finance church operations and the lavish lifestyle of church leader Apollo Quiboloy.

The church claims a membership of 6 million people and backed the 2016 candidacy of President Rodrigo Duterte, a close friend of Quiboloy. Duterte has used the group’s radio and TV program in southern Davao city to express his views on issues way back when he was mayor of the southern port city.

Quiboloy claims to be “the appointed son of God” and in October last year claimed he stopped a major earthquake from hitting the southern Philippines.

Between 2014 and the middle of last year, $20 million was sent back to the church in the Philippines, the FBI said.

“Most of these funds appear to derive from street-level solicitation,” according to the affidavit by FBI Special Agent Anne Wetzel. “Little to no money solicited appears to benefit impoverished or in-need children.”

Calls to the church for comment were not immediately answered.

Cabactulan and Duenas are expected to make initial court appearances Thursday in U.S. District Court in Santa Ana, said Thom Mrozek, a spokesman for the U.S. attorney in Los Angeles. Estopare was ordered held after a hearing in Norfolk, Virginia, and expected back in court Monday.

Investigators documented 82 sham marriages over a 20-year period between top fundraisers and church members who were U.S. citizens.

In addition to raiding the church's Van Nuys compound, agents were conducting searches at other Los Angeles-area locations and at two places in Hawaii linked to the church.

Two years ago, a leader of a Hawaii branch of the church was arrested smuggling cash onto a private plane in Honolulu bound for the Philippines with Quiboloy on board, according to court records.

Investigators said Felina Salinas declared she was carrying $40,000. But investigators said they discovered $335,000 and $9,000 in Australian currency stuffed in socks in her carry-on suitcase, according to documents filed in U.S. District Court in Honolulu. U.S. law requires that travelers declare currency in excess of $10,000.

Prosecutors said a witness saw Salinas and Quiboloy order church members to smuggle hundreds of thousands of dollars in black socks packed in suitcases from California to the Philippines in 2013 and 2014.

A defense lawyer questioned the credibility of the witness in the Hawaii case.

“I have a woman who says she saw $100,000 go from California to the Philippines, then she said it was two or three million," attorney Michael Green said, according to Hawaii News Now. “She says it was put in socks. They must have parishioners with size 18 feet because the socks must have been really big.” (AP)