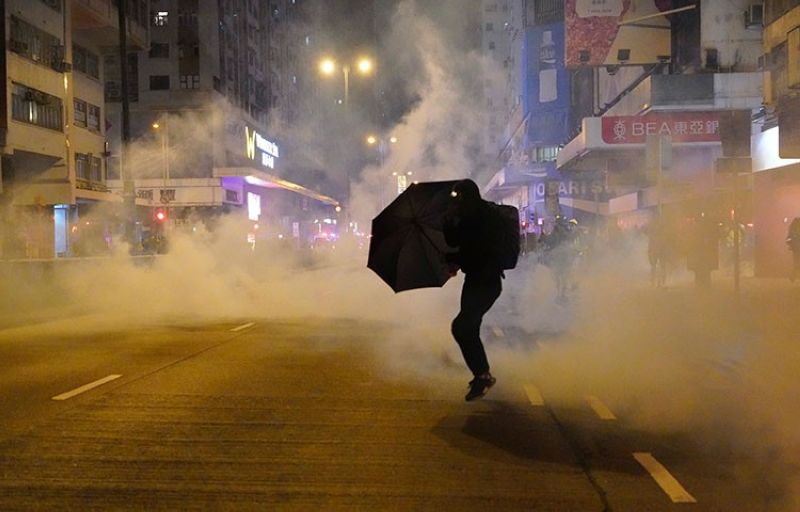 HONG KONG. In this January 1, 2020, file photo, a protester holds an umbrella as police fire tear gas during a demonstration in Hong Kong. (AP)

BANGKOK -- Authoritarian governments in Asia are undermining human rights and demonizing their critics, but they face a rising tide of protest from young people who defy grave risks to protest such repression, Amnesty International said in its annual report on the region.

The human rights group's annual survey of the Asia-Pacific region, released Wednesday, said India and China, the two most populous nations, are trying to impose their "own bleak, domineering vision on the continent, perceiving minorities as a threat to 'national security.'"

The effort to silence criticism and prevent the public from holding public officials and corporations accountable is a worrying trend, it said. But anti-government protests in Hong Kong and elsewhere showed an abiding will to resist repression, it said. Some highlights from the report.

RISING REPRESSION: Chinese leader Xi Jinping's push to vanquish dissent and impose the absolute control of the ruling Communist Party has intensified persecution of human rights defenders and others, the report said. In China and across South and Southeast Asia, governments are increasingly forthright in silencing their opponents and the media, reducing the space for even peaceful protests and introducing laws that punish online dissent, it said. It noted that many such governments also attack their critics with sophisticated social media tactics, smearing them as treasonous. Companies are shielded from accountability to the public by leaders who defend them for the sake of economic growth, it said. They also are quick to resort to using lawsuits to penalize whistleblowers and others who speak out.

VIOLENCE AGAINST INDIGENOUS GROUPS AND OTHER MINORITIES: Chinese authorities subjected Uighurs, Kazakhs and other mostly Muslim ethnic groups in the far western Xinjiang region to intense surveillance, arbitrary detentions and forced indoctrination. In Sri Lanka, anti-Muslim violence broke out after Easter Sunday bombings that killed more than 250 people, mainly Christians, in three churches and three hotels. Across the region, all governments need to make more headway in protecting and empowering indigenous populations, the report said.

ARMED CONFLICT: In Afghanistan, more than 2,500 people died and 5,676 people were injured from January to September, mainly in attacks using homemade explosive devices that often were carried out by the Taliban against minority ethnic groups. In Myanmar, the military carried out war crimes in Kachin, Rakhine and Shan states, as internal strife continued, the report said.

REFUGEES and MIGRANTS SPURNED: The report also noted Australian detentions of refugees and asylum seekers and turning boats of people fleeing their home countries back to sea. In Japan, where refugees rarely are granted asylum, the government has not yet ratified the Migrant's Convention to protect rights of a growing population of foreign workers.

DISAPPEARANCES and EXTRAJUDICIAL KILLINGS: In Pakistan, journalists, human rights defenders and members of the Shiá Muslim community were among the hundreds of people who were “disappeared" by security forces, often detained without charges or trial, the report said. Laws against sedition and defamation were used to curtail media freedoms, while anti-blasphemy laws were used to persecute some people and justify human rights abuses. Governments in the Philippines and other countries combating drug abuse and trafficking were responsible for killings of thousands of people, usually from poor and marginalized communities, it said.

PROTESTS PERSIST: Protests have gained momentum in many places, but most prominently in Hong Kong, where months of demonstrations that began peacefully but turned violent have been met with excessive force, including beatings of non-resisters and misuse of tear gas and rubber bullets, the report said. Demonstrations against India's Citizenship (Amen

dment) Act that excluded Muslim refugees from acquiring Indian citizenship through fast-track naturalization prompted the government to walk back plans to conduct a nationwide citizenship registry to identify illegal foreign nationals, though 25 people died in the violence and thousands were arrested. In India, as well as many other places, journalists often were targeted while trying to cover such protests.

SIGNS OF PROGRESS: The report noted many improvements, including the decision by the International Criminal Court to order an investigation into abuses committed by Myanmar's military against Rohingya Muslims, some 700,000 of whom have fled to Bangladesh. But Bangladesh authorities have also targeted Rohingya in smear campaigns that have fomented violence against the refugees, it said. In some countries, such as Japan, efforts to win equal treatment for all genders and crack down on sexual harassment are making headway, it said. Taiwan legalized same-sex marriages, and South Korea's Constitutional Court ruled that criminalization of abortion was unconstitutional. In Malaysia, the coalition government is striving to deliver on campaign promises to improve protection of human rights, though it rejected proposals to better safeguard LGBTI and indigenous people, the report said.

“The coming year is likely to be as trying as the one that has just passed,” the report said. "But as young activists across Asia have repeatedly shown, where there is no hope, it must be created." (AP)