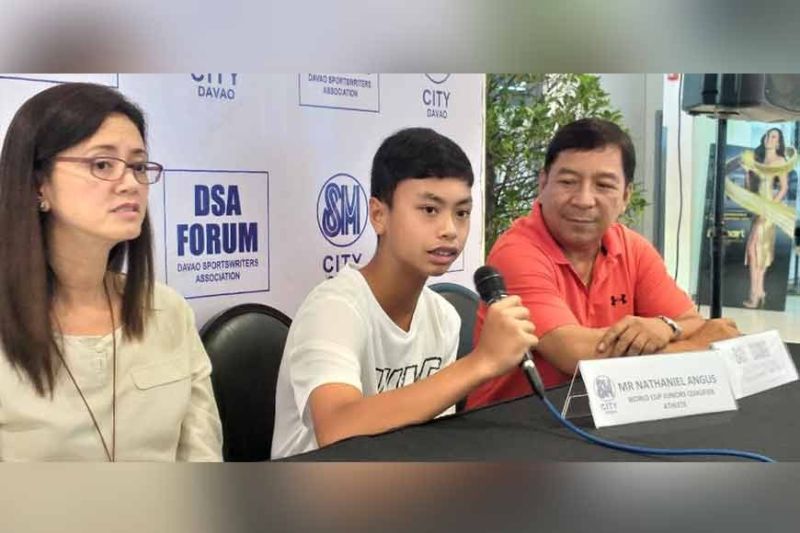 DAVAO City’s Christian Nathaniel Angus aims to reach the finals when he makes his debut in the 2020 ITF World Junior Tennis Competition (Asia/Oceania Qualifying Zone) on February 17 to 22 in Jakarta, Indonesia.

“Kayang mag finals,” Angus, 13, bared this during the Davao Sportswriters’ Association (DSA) Forum at The Annex of SM City Davao Thursday, January 30. He was accompanied by his mother Lani and veteran coach Boy Diong of Philippine Tennis Academy (PTA).

The seventh grader from St. John Paul II College of Davao said he’s excited to represent the country along with his teammates Heinz Asian Carbonilla and Al Rasheed Lucman, who are also among the top boys 14-under tennis players in the Philippines.

Angus, then a wildcard entry, emerged champion in the recently-concluded national tryouts for the 2020 ITF World Junior Tennis Competition in Tagum City, thus, earning him a slot to the World Junior qualifying in Jakarta.

Diong, for his part, said Angus has shown much promise from the very start he saw him.

Lani, meanwhile, said that his son will leave for Manila to train on February 9 to 14. The juniors’ team will then depart for Jakarta on February 15 and will have practice round on February 16. Matches will start the following day, February 17.

Philta president lawyer Antonio Cablitas, on January 16, issued a memorandum naming Carbonilla, Angus and Lucman will represent the country to the Jakarta netfest.

Philta secretary-general Romeo Magat, meanwhile, wrote the Department of Social Welfare and Development (DSWD) on January 20 seeking for necessary clearance for travel for the three junior tennis players who are all minors.

Angus played tennis when he was six with the inspiration from his father father Dr. Victorio C. Angus, Jr., a netter himself.

In 2018, he crowned himself boys 12-under category champion of the Dacudao Cup and he also bagged a elementary boys gold medal in the Davao Region Athletic Association (Davraa) Meet.

He salvaged a bronze in the Palarong Pambansa 2019 and was also silver medalist in the Batang Pinoy qualifying.