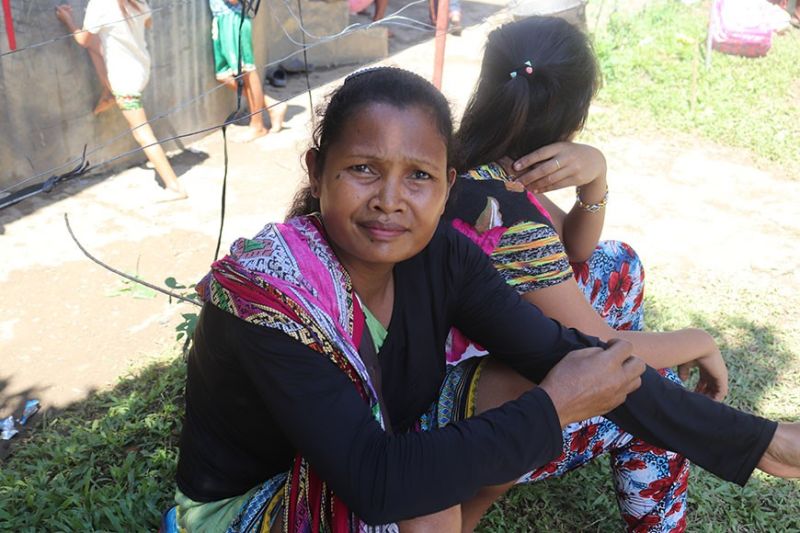 ADI Pinsa, 35, one of the displaced Lumads staying at the United Church of Christ in the Philippines (UCCP) Haran, endured the distressing feeling of being away from her homeland in Talaingod, Davao del Norte just to raise their concerns to the government here in Davao City.

In an interview Thursday, January 30, Pinsa shared with SunStar Davao that she has been taking temporary shelter at UCCP-Haran for four years already. They came here all the way from the hinterland of Talaingod after allegedly being harassed by the government soldiers.

In November, she returned to her hometown and spent Christmas there.

She was with her husband and her six children when she went to Haran to seek temporary shelter. Her daughter, 17, is now a grade 6 student studying inside the facility. She was looking after her two-year-old son who was running on the open grounds in Haran when interviewed.

When they were in Talaingod, their source of livelihood was farming. They used to plant sweet potato and cassava together with her husband. She said she doesn’t know what to do aside from farming considering that she hasn’t even been able to go to school.

But right now, they only rely on the support coming from the non-government organization and help from UCCP.

Aside from fellow Lumads from Talaingod, there are also other Lumads coming from Kapalong, Arakan, and Compostela.

The facility is home to several Indigenous Peoples (IPs), including minors and infants, who were staying under the tree while checking their belongings beside them. Pinsa said they have to secure their things in case the alleged paramilitary group attacks again.

She said they wanted to return to their home but they wanted the government to heed their call first to pull out the military and restore the Salugpongan Ta’ Tanu Igkanogon Community Learning Center, Inc. (Salugpungan).

The Salugpungan made headlines last year after it was reported to be teaching communist ideology to its students.

Bishop Melzar Labuntog, UCCP-Haran general secretary, meanwhile, expressed his dismay on the recent move of the government particularly the Regional Peace and Order Council (RPOC)-Davao for coming up with a resolution closing the UCCP-Haran without getting their side of the story.

He said the move has violated the constitution of the Philippines which mandates the separation of Church and State.

“Amo kaning gi-open ingon nga sanctuary sa mga Lumad or bisan kinsa nga mga tao nga nanginahanglan og security, peace, and panahon sa pagpamalandong. Sumala sa among statement kini kabahin sa ministeryo sa simbahan og kay simbahan man, walay gipili, gidawat namo tanan (We opened this sanctuary for the Lumad and other people who need security, peace, and those who want to reflect. As part of our ministry, we accept everyone because we are a church),” Labuntog said in an interview.

He added that UCCP Haran will continue to stand firm to their ministry for the people despite the resolution.

They are also open for a dialogue with the government to discuss the issues especially on the allegations thrown against them. They also want to clear the issue that they are using the Lumad in order to raise funds from foreigners.

“That is not true. We just want to open the facility for the Lumad to find sanctuary where they can stay under the threats that they have experience from the place where they from,” Labuntog said.