Evacuated American says Wuhan, China was like a ghost town 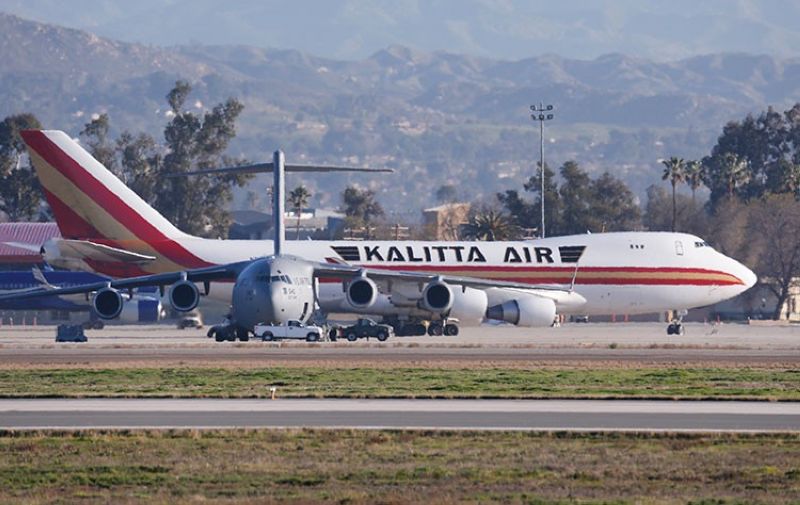 USA. In this January 29, 2020 file photo, an airplane carrying US citizens being evacuated from Wuhan, China, lands at March Air Reserve Base in Riverside, California. (AP)

RIVERSIDE, California -- Jarred Evans, a professional football player in China, is used to wearing a helmet and shoulder pads. But in the wake of a deadly viral outbreak, he's switched to a mask and medical gloves.

"When you're dealing with life and death, it's a whole different ball game," he said in a telephone interview on January 30.

Evans, 27, was one of 195 Americans evacuated from the city of Wuhan and flown to March Air Reserve Base in Southern California until authorities confirm they don't have the coronavirus that has sickened thousands and killed more than 170 people.

Most cases are in China, but the outbreak has spread to more than a dozen countries, and the World Health Organization declared a global emergency Thursday.

The US on Thursday confirmed the country's first case of person-to-person spread of the virus, a man who is married to a Chicago woman in her 60s who got sick after she returned from a trip to Wuhan.

Evans and the other evacuees, including children ranging from around a year old to about 13, are staying at the sprawling base where they received a battery of blood tests and were given nose, throat and mouth swabs, Evans said. Some test results won't be back for a week, he added.

While the surroundings are fairly comfortable, Evans said Thursday that he and others are still being cautious about mingling.

“Today a lot of kids were enjoying the weather,” he said, and the base provided scooters, bikes, footballs and soccer balls for them to play with.

But at dinnertime, Evans added, “everyone’s getting their food and goin right back to their rooms.”

Those being held at the base 60 miles (96 kilometers) east of Los Angeles arrived Wednesday morning. They aren't required to stay but had agreed to remain for at least 72 hours. Officials also can quarantine any of those evacuated on a case-by-case basis.

That happened to another American who tried to leave Wednesday night.

The order was issued “as a result of the unknown risk to the public" because the person had not undergone a complete health evaluation, the agency said.

It can take up to 14 days for someone who is infected to develop symptoms, health officials believe. None of the Americans housed at base have shown symptoms of the virus since their arrival, Arballo said.

Evans said he would remain until testing shows he is free of the virus.

He is a professional quarterback who moved to Wuhan several years ago to play in a Chinese football league.

The city of 11 million people felt joyful, he said, with residents getting ready for the Lunar New Year.

Then, in a matter of days, “it turned into chaos" as news broke of the rapidly expanding coronavirus outbreak. Suddenly, Evans said, people were swarming pharmacies and stores to get masks and disinfectant spray.

Friends translated the news for Evans, who speaks no Chinese.

“I stocked up on rice, noodles, water, anything that could help me survive for a week or two,” Evans said.

The Chinese government shut down the city. Buses, trains, taxis, and personal cars were banned. The military patrolled some streets.

He compared the deserted city to an Old West ghost town.

“I've never experienced anything like this before," he said. “Imagine new York city being shut down. I was completely scared at first, because I didn’t know exactly what was going to happen. I don’t speak the language, and my family is so far away.”

Evans holed up in his home for a week and a half until he received the news that the US Embassy was evacuating its diplomats and their families and other US citizens.

He was notified that a chartered flight was carrying some of the 1,000 or so Americans in Wuhan back to the United States. The flight was coming in the next day.

Evans said he was told, “If you can make it there, you're on the flight.”

“It was a race against time," he said.

Evans found an acquaintance who drove him to the airport. The embassy notified Chinese authorities of the license plate number so he could pass through the guarded streets.

On the plane were two men in full hazardous material suits, who warned them about the seriousness of the outbreak. Nobody appeared sick but all of the passengers decided to wear masks throughout the flight, Evans said.

The plane flew to Anchorage, where the passengers had health screenings, and then landed at March Reserve Air Base on Wednesday morning. The U.S. arrival was joyful, Evans said.

“We were clapping, smiling, laughing ... there were cheers,” he said.

Once he is cleared, Evans intends to visit his family. Then it's on to Switzerland, where is signed to play with the Bern Grizzlies this year. But he would like to return to Wuhan when the coronavirus outbreak recedes.

"The community is amazing, the people in Wuhan are amazing. China is a beautiful place," he said.

But the threat of the deadly disease has left its mark.

"I’ve never experienced anything like this before," Evans said. "The weirdest thing is the threat of man. You can actually get this virus by shaking hands."

"I'm a very hands-on person," he said, "And for me to be quiet and not to interact with others has been one of the hurtful things that I have to do. But to protect myself, I have to do it." (AP)