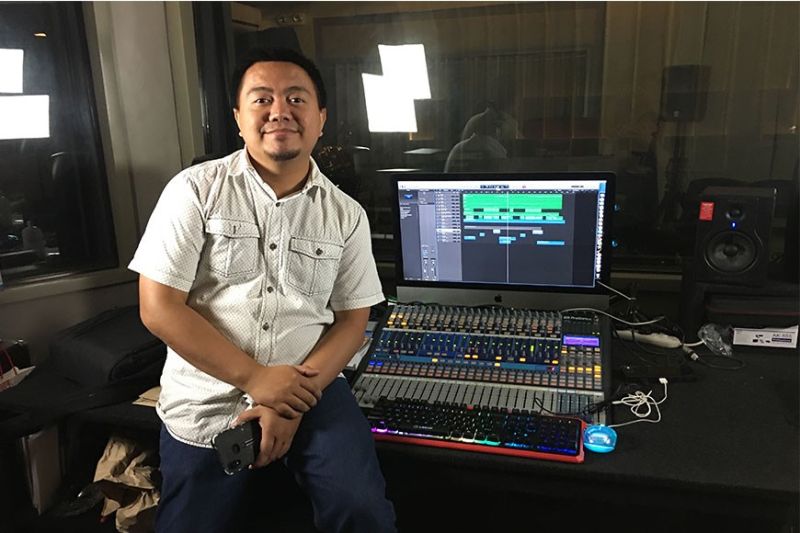 DAVAO. Jeremy Sarmiento inside the technical booth of his recording studio in Damosa, Lanang, Davao City. (Photo by Roberto A. Gumba Jr.)

INSIDE the technical booth of his recording studio, Jeremy Sarmiento sat beside the console.

“Maulaw man ko oy. (I am shy),” Sarmiento, who has been one of the influential persons in Davao City’s music and entertainment industry for 19 years, began when he was asked for an interview.

The self-confessed introvert music artist and voice coach has consistently produced world-class performers and contributing to the development of the city’s music scene.

Sarmiento is behind Davao’s champions in the prestigious World Championships of Performing Arts (Wcopa) from 2014 to present. Most of the songs he wrote, produced, arranged, and designed won its performer awards. He is also a WCOPA regional director.

Among the songs he made is the inspiring “Di Matitinag” which recently decorated Jed Madela as the Male Recording Artists of the Year during the 11th Philippine Movie Press Club (PMPC) Star Awards for Music this year, the same award Madela bagged in 2019 with the same song.

The former banker shared his musical foundation started since childhood. He was influenced by his mother who loves to hear him sing.

“Grade school pa lang ko mapansin nako nga wala kaayo ko gipugos sa academics sa akong mama kay ganahan man mukanta akong mama ba. Ako iyahang pet sa music (When I was in grade school, I noticed that my mother did not pressure me on academics. She loves to sing, and I was her pet in music),” he said.

If there is any reason, he suspected, was that his mother sees in him an ability to easily pick up a melody.

“Abi nakog okay lang na siya pero it is something gift daw na siya so ginabanatan dayon ko sa akong mama. Ginapakanta-kanta na ko (I thought it was normal but they said it was a gift. Since then, my mother would want me to sing every time),” he said.

He said he would sing for his mother’s friends who pay him tokens. It went on until high school and college. The management accounting degree graduate is serving as the choir conductor of Ateneo De Davao University (Addu) during his stay at the university until now.

At 22, he has been coaching students at a music school along J.P. Laurel Avenue until he was asked to judge the contestants of the Star of Davao, the city’s biggest singing competition in 2004.

He considered it as his first break. In the following conduct of the event, he was asked to do workshops and became instrumental in producing music artists from the city including those who won in Wcopa and national singing competition.

But despite his successes through his students, he intends to change the trend that artists in Mindanao have to take a chance in national contests just to be known.

“Gusto nako mailhan ang mga maayo nga artists diri. If kaya namo buhaton nga dili magpadala og artists sa Manila, ma-discover lang sila diri unya dalahon sa Manila mag-perform, that would be a lot better (I want the local artist to be known here. It would be better if they will be discovered here and be invited in Manila to perform),” Sarmiento said.

He said it is possible as it already happened to Zhalia, a trio composed of Julia Serad, Jetz Tacsanan, and Shaira Opsimar. The group, he said, has been invited to perform in Cebu after their song “Pagsure Uy!” hit.

“Maghimo lang ta’g mga nindot nga songs kay somehow, ang songs will catapult you sa kung asa gusto nimo muadto. If voice lang or singing, mura’g daghan na man gyud hawd sa Pilipinas mukanta, lisod kaayo makipagsiksikan (We just need to make good songs because it would somehow catapult you to where you want to be. Because if we only know how to sing, it would be difficult to compete with other talented singers),” he said.

“But if you have a beautiful song nga maganahan ang tanan (that people will love), automatic ka mailhan (they will remember you),” he added.

He said he will challenge the notion that Dabawenyos are difficult to please when it comes to local music.

“Akong gusto sa audience sa Davao nga makatuon gyud unta mu-appreciate, makatuon gyud mupalakpak. Kinahanglan gyud naay buhaton parang mahimo gyung active ang mga tao (We have to do something so people in Davao will learn to appreciate and clap for our artists),” he said. “I think muabot gyud siya in the future (I am positive it will happen in the future).”