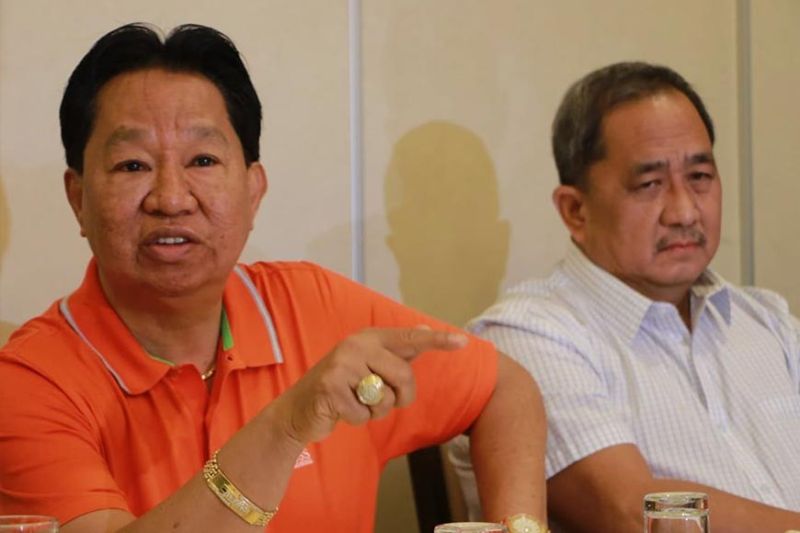 PAMPANGA. Angeles City Water District (ACWD) chairman of the Board Bernie Cruz (L) and General Manager Rey Liwanag answer questions from the media as they explain that a joint venture agreement will benefit consumers and will infuse fresh capital to further improve the services of ACWD, during Friday’s press conference at Fortune restaurant, Clark Freeport Zone, Pampanga. (Photo by Chris Navarro)

WATER districts are allowed to partner with private entities to provide water for the local residents.

Officials of the Angeles City Water District (ACWD) stressed this during a press conference in Clark Freeport on Friday, January 31.

The ACWD officials were reacting to reports that some Angeles City officials are opposing the privatization of the water district.

But Cruz clarified that under President Decree 198 or the Local Water District Law said a government-owned corporation like the Angeles City Water District cannot be privatized or sold to private companies.

Año already warned local officials not to meddle with local water district operations, according to the ACWD chair.

Quoting Año, Cruz added that local officials have no business interfering with the operations of water districts.

“Local officials should not poke their noses into the operation of local water districts because they are autonomous,” Cruz quoted Año as saying.

Under the Provincial Water Utilities Act of 1973, a local water district is not under the jurisdiction of any political subdivision, Cruz stressed.

Año even warned that local officials who exercise power over water districts may be charged before the Office of the Ombudsman.

Cruz said they furnished city officials of Año’s memorandum during a public hearing at the city council several months ago.

“As of the moment, we are entertaining the unsolicited proposal of Prime Water. You cannot entertain two entities at the same time,” Liwanag said.

A joint venture agreement will be beneficial to the water district and its consumers in terms of investments, expansion, and other projects, he added.