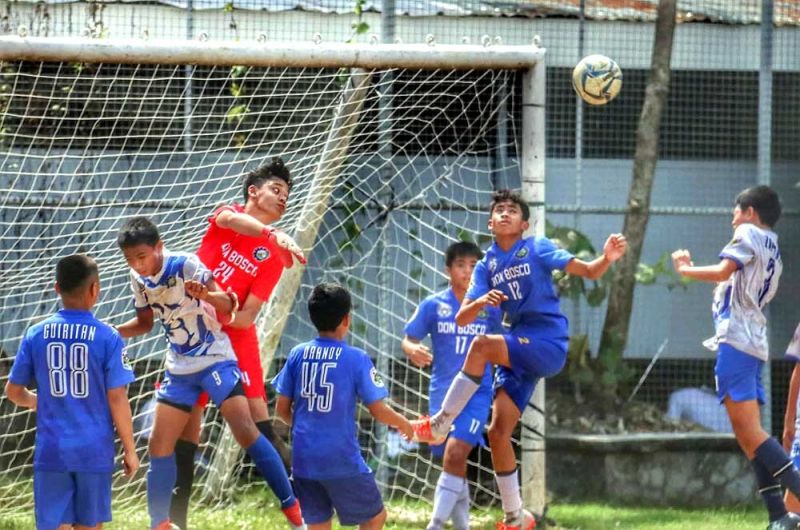 AFTER winning the Boys 14 title a day before, the Don Bosco Technical Center (DBTC) added the Boys 12 title of the AboitizLand Football Cup on Sunday, Feb. 2, 2020.

It was already a sure thing as DBTC A, manned by Grade 7 students of the school, defeated sister team DBTC B, 4-1, in the finals at the University of Cebu METC campus field. DBTC B had to play two games in less than 24 hours as it won its semifinal match against Paref Springdale, 3-1, on Feb. 1. Gabriel Tabar had two goals, while Gabriel Zapanta had one.

In the Boys 16 Division, which was played at the Sacred Heart School-Ateneo de Cebu field on Feb. 1, Cebu International School (CIS) tallied the best win of the day after beating DBTC C, 10-0. Keen Ceeganeux and Shimogama Lumi had three goals each, while Dominic Lim had two. Edrigo Unchuan and John Choi scored the other two goals for CIS.

Host Ateneo A also posted an easy win, 5-0, against Giuseppe with Francis Matugas scoring twice and Christopher Ozawa, John Ruffin and Zachary Frias getting one each, while Ateneo B had to fight back to beat Lapu-Lapu United, 2-1. James Rufin got the first goal in the 19th before Jeery Bonghanoy equalized in the 28th. John Canonigo got the game-winner for Ateneo.

On the other hand, after losing via default to KNF Ferraren on Feb. 1, SMS Boystown defeated Lapu-Lapu United on Feb. 2, 5-2.

In the Boys 18 Division, KNF defeated CIS, 2-1, thanks to goals by John Cuadra and John Gandhi.

In the Men’s Open division at the Cebu City Sports Center, last year’s losing finalist Don Sacredale started on a strong note with a 3-2 win against Universit of San Jose-Recoletos (USJ-R). Karlo Villamor got the first goal in the 4th and Nicko Villacin added another in the sixth. USJ-R got one in the 48th but Villamor added a second goal in the 49th. (ML)