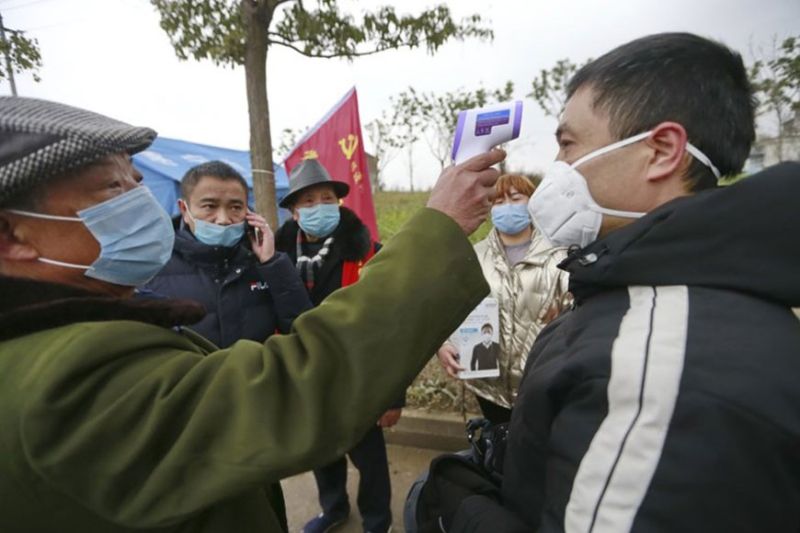 In this Saturday, Feb. 1, 2020, photo, a government worker takes the temperature of a passer-by at a checkpoint in Suining in southwestern China's Sichuan Province. (Chinatopix via AP) 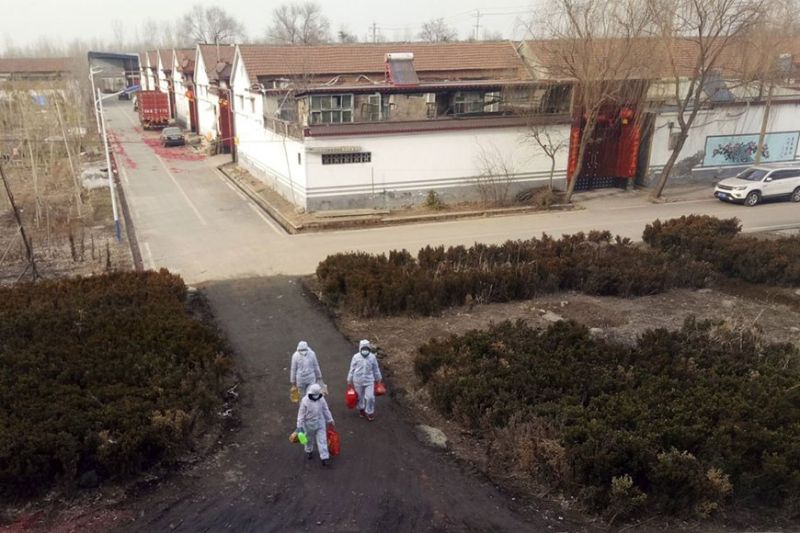 In this Saturday, Feb. 1, 2020, photo, government workers in protective suits carry groceries for a family under home quarantine in Zouping in eastern China's Shandong Province. (Chinatopix via AP) 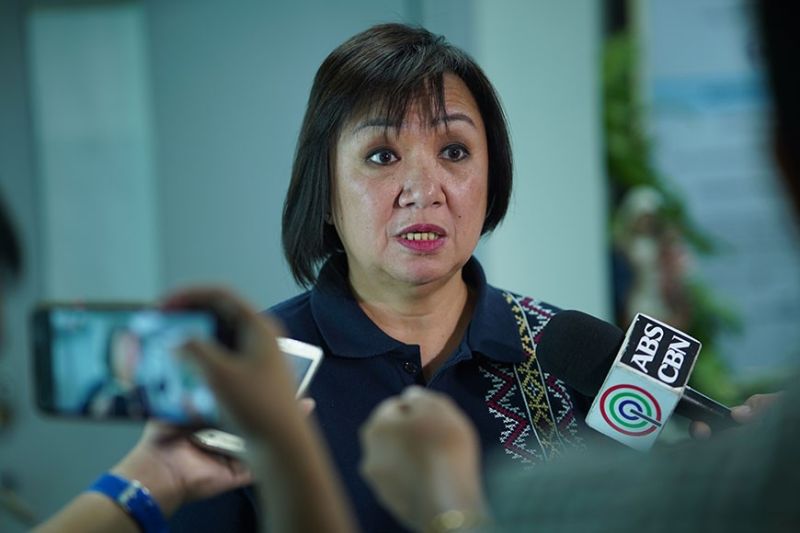 Davao City Tourism Operations Office head Gene Rose Tecson reported after a meeting at the Civil Aviation Authority of the Philippines in Davao City that the city recorded 14,000 Chinese tourist arrivals last year and they are not expecting to exceed last year’s count as a decline of Chinese nationals visiting the city is expected. (Photo by Macky Lim) 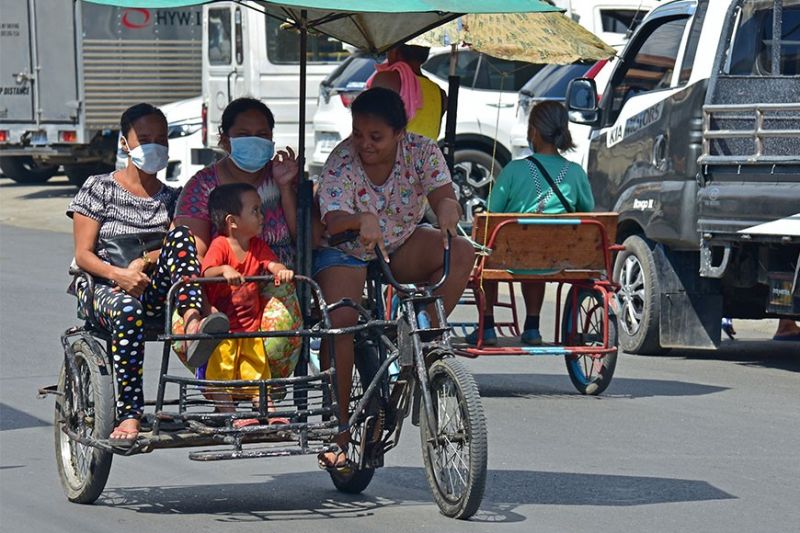 MASK SCARCITY. Two women wear masks as they ride a trisikad along Sta. Ana Avenue in Davao City. Pharmacies and drugstores around the city are reported to have been running out of face masks due to the bulk buying of Dabawenyos following the novel coronavirus (2019-nCoV) outbreak. (Photo by Macky Lim)

WHENEVER a new disease breaks out, it is often followed by "mass fear and panic", actions albeit useless but are explicable.

After all, who would not be scared when information related to the disease is still scarce, especially about its treatment and/or containment.

Just as the break out of the novel coronavirus (2019-nCoV) which was believed to have started in early December last year in China, particularly in Wuhan in the province of Hubei. It was called "novel" because it is a new strain of coronavirus. Coronaviruses are a family of viruses which causes illness to humans from the mild common cold to a little more complicated as flu. Its novelty makes it more difficult to learn about its true origin, its severity, and its treatment.

When the outbreak of the 2019-nCoV was reported, not only one country implemented travel ban to Chine and entry ban of Chinese who are coming from China and its regions. Even the Philippines recently imposed a temporary ban on all travelers, except Filipinos, from China and its autonomous regions and traveling to China or its regions.

Among the recent order of President Rodrigo Duterte was the mandatory 14-day quarantine for Filipinos and permanent resident visa holders coming from any place in China and its special administrative regions and the establishment of a repatriation and quarantine facility.

The US, Japan, Singapore, and Australia have imposed similar restrictions despite criticism from China and an assessment from the World Health Organization that they were unnecessarily hurting trade and travel.

Several local government units also mulled ban on the entry of Chinese tourists to their area but only the Island Garden City of Samal (Igacos) has ordered the temporary suspension of group tour travels of Chinese and other nationals coming from the 2019-nCoV-affected countries to their place as of February 1.

Also, several international airlines have suspended their flights to China, especially to Hubei. Just recently, direct flights between Davao City and Jinjiang, China are suspended for the whole month of February.

In a news report of the Philippine News Agency recently, several oil companies in the country have implemented rollback on their prices as Goldman Sachs, a multinational investment bank and financial services company, forecast that 2019-nCoV will ease global demand on jet fuel and will soften world oil prices.

Here in Davao City, City Tourism Operations Office (CTOO) head Generose Tecson said the number of tourists coming to Davao City this year might not exceed last year’s count which is at 2.34 million as a decline of Chinese nationals visiting the city is expected.

The number of Chinese visitors last year was at around 14,000.

However, the national government sees the tourism impact of the novel coronavirus to the Philippines to be short-lived although authorities still treat the disease as an external risk to economic growth.

When a coronavirus-positive child was reported in Cebu on January 20, people have scrambled for the government to act fast,even calling for the administration to ban the entry of all Chinese in the country.

In Davao City, several netizens have made known their reactions regarding the news on the novel coronavirus by commenting on Sunstar Davao's 2019-nCoV posts. A Facebook account holder one Rosana Francisco Monteverde questioned the Davao City government's non-cancellation of direct flights from China.

“Why does the government allow direct flights from China to arrive in Davao? Last Sunday, may flight na dumating, and just this morning another one from Xiamen. Bakit di pina-cancel? Nakakatakot for those mga sumasalubong sa kanila na govt agencies [sic],” Monteverde’s comment read.

One Justine Rama admitted her fear and alarm over the continued entry of Chinese nationals in the country.

(When will the Philippine government realize that it needs to strengthen its borders. We have polio, HIV, and other diseases. Now we also have the 2019-nCov. This is unfair! I know that Chinese are humans too, but they are rich and are able to take care of themselves. How about us Filipinos? We will just die one by one.)

A Davao City resident who refused to be named suggested through a Facebook chat that the government should have banned the entry of all Chinese and that no planes from China should be allowed to touch down at the Philippines' airports.

One resident from Davao de Oro also expressed his worry through online messaging. "What happen to the poor people in Ph? Plus poor hospital facilities..huhu," he said.

The apprehension of the public on the novel coronavirus has also resulted to the panic buying of face masks even though there is no concrete evidence yet that face masks can prevent a person from contracting the virus.

As the World Health Organization (WHO) declared the outbreak of the new virus a global emergency recently, governments in different nations have scurried to take their own measures they deemed necessary for the containment of the virus, allaying the panicking public, and managing of the patients once the virus successfully enters their jurisdiction.

Here in Davao Region, Department of Health Director Anabelle Yumang said in a press conference held on Friday, January 31, the Bureau of Quarantine is strictly monitoring the travellers going to Davao City both at airports and seaports.

Part of the traveller's monitoring is the handing out of a form or a declaration card, which is required to be filled out by the visitors. Among the questions in the form is the point of origin of the visitors, their purpose of visiting, where they intend to go, the contacts of their hosts or where they will be housed and also their own contact number. Aside from that, the Health authorities also give their contact numbers so that anybody who develops symptoms of the virus can easily reach out to them.

Dr. Marjorie Culas, assistant city health officer, in the same event said that together with the City Epidemiology Surveillance Unit, in coordination with the Civil Aviation Authority of the Philippines (Caap) and the Bureau of Quarantine, and other concerned government agencies, which compose the task force against 2019-nCoV in response to the Department of the Interior and Local Government (DILG) order following the WHO's declaration, is the one who conducts the strict monitoring of the Persons Under Monitoring (PUMs).

The task force goes to the PUM's houses if they need to, and calls the PUMs to instruct the things needed to do during their 14-day self-quarantine.

The task force, which they call the Emerging and Re-emerging Disease Team, Dr. Yumang said, will convene today to reorient themselves against the disease.

The Health department also urged the travellers to surrender themselves to health centers or hospitals if they manifest symptoms of the virus as it is their responsibility to their own selves and responsibility to protect others.

Is there a need to panic?

As of January 30, DOH-Davao has recorded eight PUMs who had seek consultation to different hospitals in the region and one patient under investigation (PUI). The PUI, according to Dr. Yumang in the same event, has already been discharged and has no more symptoms (asymptomatic) yet is still under strict monitoring.

PUMs are persons who manifest symptoms of the virus or have met some but NOT ALL of the criteria or category to be considered as PUI.

The DOH, according to Dr. Yumang, has given them four newest categories for every hospital and the Bureau of Quarantine to use as a sign tool to determine if the person will be catergorized as PUM or PUI. They are: if the person has fever with 38 degrees Centigrade or above temperature, or has history of fever within 14 days; respiratory infection like cough and cold; travel history for the past 14 days in China; and lastly history of exposure (to patient confirmed positive with novel coronavirus).

The DOH-Davao also advised the public not to panic as the region is still 2019-nCoV-free.

She also said wearing of face masks are only encouraged to be worn by people who have cough to avoid spreading the virus but not as a measure against 2019-nCoV. She, moreover, strictly advises the public to take precautionary measures which include observing proper hygiene especially regularly washing of hands, following cough etiquette - that is by covering one's mouth when coughing or sneezing, avoiding crowded places, eating nutritious food and taking vitamin supplement to boost the immune system, and hydrating one's self.

Dr. Cleo Fe S. Tabada, regional epidemiology surveillance unit medical officer, in the same event said that although the 2019-nCoV is new, yet most of the cases, even in China, showed that only those symptomatic confirmed positive 2019-nCoV patients can be infectious or contagious.

As most coronaviruses, 2019-nCoV is self-limiting which means those who have contracted the virus will heal naturally eventually, just as though they are suffering from flu or common cold. Symptomatic treatment is the way to treat or manage the 2019-nCoV patients. This means only the symptoms of this disease have treatment and not its rootcause.

As of January 30, China reported that there are 7,711 confirmed and 2,167 suspected cases throughout the country. Of the confirmed cases, 1,370 are severe and 170 people have died. There are 124 people who have recovered and been discharged from hospitals.

As of 12 noon of February 1, 2020, the DOH, in its press release, has reported five additional PUIs, bringing the total PUIs to 36. Twenty-three PUIs are currently admitted and isolated, while 10 have been discharged but under strict monitoring. DOH also reported a total of two confirmed cases with one mortality. The previously-reported PUI mortality was found to be negative for 2019-nCoV.

In Davao Region, of the eight PUMs as of January 30, three are now asymptomatic.

The data shows that 2019-nCoV has only less than 3 percent mortality rate, much much lesser compared to deaths due to measles which is at 15% or common flu which is at 6%.

With this, Health officials advise the public that panicking during this time is uncalled for and will not help anybody. In fact, as shown in different social media, the public frenzy against this disease only causes fear which resulted to discrimination especially against the Chinese. Fear also feeds further the hatred among Filipinos against the Chinese.

Instead of sowing fear, the public is encouraged to get their acts together, as Dr. Leopoldo Vega, Southern Philippines Medical Center chief, said this is the only way we can achieve a "prosperous new world."