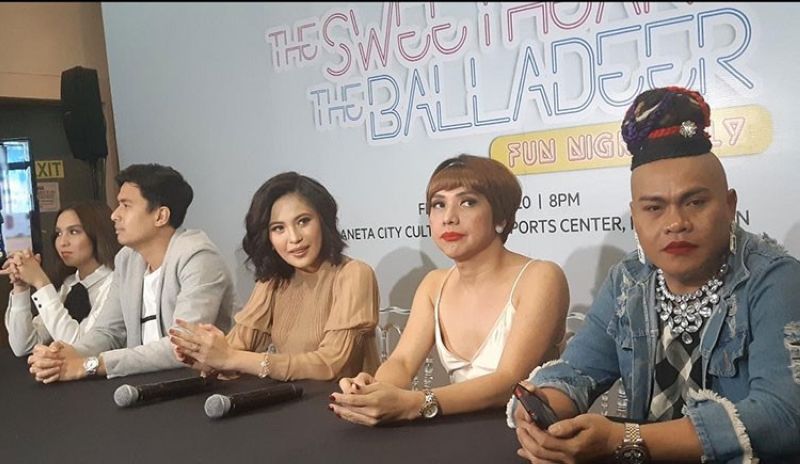 THEY'VE been doing live comedy shows before huge crowds for years now, but comedians Donita Nose and Super Tekla consider themselves lucky for not having been heckled or disrespected on and off stage.

Instead, the two disclosed that what they usually get are words of approval or admiration. They credit the maturity of today’s audiences who know that they’re just doing their job to make people laugh.

“They would approach us and tell us they enjoy watching our videos before going to bed,” Donita said. “Pinapanood daw nila pati yung old comedy shows namin at inuulit-ulit pa raw nila.”

Super Tekla said he is still amazed when people recognize them and request to have a picture with him and Donita.

The zany duo spoke to reporters at the GMA Executive Lounge to promote the third leg of their regional concert “The Sweetheart and The Balladeer (Fun Night Only)” top billed by Asia's Pop Sweetheart Julie Anne San Jose and Asia’s Romantic Balladeer Christian Bautista, and which Donita and Super Tekla are a part of alongside Kapuso’s hottest young star Kyline Alcantara.

The pre-Valentine concert will bring them to Urdaneta, Pangasinan on February 8 following sold-out shows last year in Iloilo City and Cagayan de Oro. The Pangasinan leg will be held at the Urdaneta City Cultural and Sports Center starting at 8 p.m. It is directed by Paolo Valenciano.

During the same press conference, Donita and Super Tekla shared that the secret to the success of their tandem lies on comedic timing and quick thinking, often during actual shows.

For their Urdaneta City concert, the duo said they are now learning some Ilocano words and phrases which they will use in their spiels and repartee. It will add spice to their comedy, said Super Tekla.

Super Tekla said the first two legs of their concert were a breeze to them since he speaks the Visayan dialect and could translate their Tagalog jokes in the vernacular. He was born in Pigcawayan, Cotabato.

He said the Pangasinan concert will be more challenging for them since they don't speak Ilocano.

But Donita said she knows plenty of Ilocano words since she had an Ilocano boyfriend in the past whose name is Christian, jokingly referring to Christian Bautista.

Christian played along and chided Donita for exposing their big secret.

“The Sweetheart and The Balladeer” is produced by GMA Network as part of its 70th anniversary. It is also a joint project between the network’s regional arm, GMA Regional TV and GMA Entertainment Group.