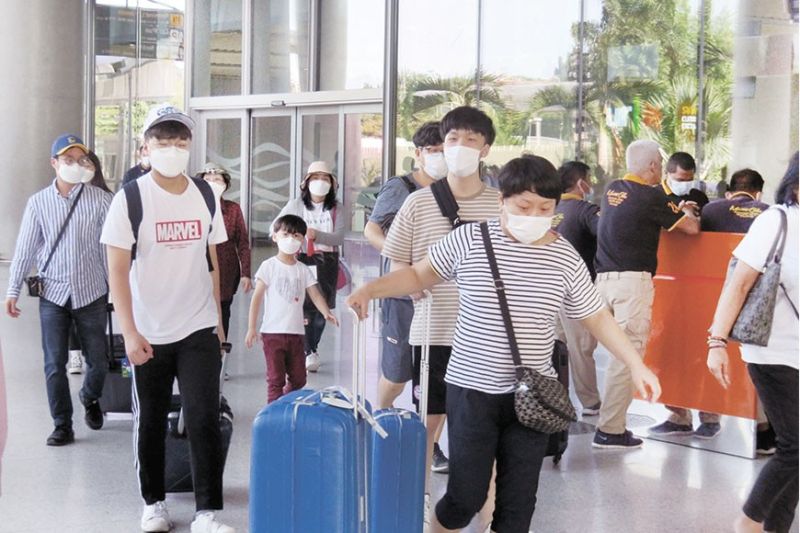 TOURIST ARRIVALS CONTINUE: Following the imposition of the ban Sunday on the entry into the Philippines of travelers, except Filipino citizens and permanent resident visa holders, coming from China or its Special Administrative Regions, the Mactan-Cebu International Airport continues to receive a stream of tourists, including from Asia but not from China, on Monday, Feb. 3, 2020. The Associated Press reports that as of Monday, the 2019 novel coronavirus acute respiratory disease has infected more than 17,300 people in 24 countries, and killed 362 people. (Sunstar Photo / Allan Cuizon)

A TOTAL of 95 Filipinos arrived at the Mactan-Cebu International Airport (MCIA) on board five flights from Hong Kong and Macau Sunday, February 2, and Monday, February 3, and were told to quarantine themselves for 14 days, the incubation period for the zoonotic 2019 novel coronavirus (2019-nCoV).

Four of them, however, are not residents of Cebu and have nowhere to stay in the province. They were brought to a government hospital in Mandaue City, one of the designated quarantine centers, said Bureau of Quarantine (BoQ) 7 Chief Terrence Anthony Bermejo.The four will stay in the center for 24-48 hours and will serve the remainder of their 14-day quarantine in another government facility in Pinamungajan, southern Cebu.

For those under home-quarantine, family members were advised to set aside separate utensils and take all precautionary measures to avoid constant exposure to their relative who had just arrived from China.

Quarantined family members are also discouraged from going outside and are required to wear a protective mask.

For monitoring purposes, their body temperatures and contact details were taken prior to the returnees’ release from the airport.

Bermejo said they will be regularly checked by local health workers in their respective hometowns in Cebu.

The measure is in line with President Duterte’s order to put Filipinos and permanent resident visa holders coming from any place in China and its special administrative regions under a 14-day mandatory quarantine.

Duterte also ordered a temporary ban on all tourists coming from China and its special administrative regions, Hong Kong and Macau, upon recommendation of the Inter-agency Task Force for the Management of Emerging Infectious Diseases which convened Jan. 31 following the World Health Organization’s declaration of the 2019 novel coronavirus acute respiratory disease (2019-nCoV ARD) outbreak as a public health emergency of international concern.

Last Sunday, around 200 passengers, including 121 Chinese nationals landed at MCIA aboard three flights from China.

While the 79 Filipinos on board were allowed entry, the foreigners were sent back to their points of origin, according to Mactan-Cebu International Airport Authority (MCIAA) General Manager Steve Dicdican.

The following day, 10 Filipinos were the only passengers on board a Cathay Pacific direct flight from Hong Kong which arrived in Cebu at 10:48 a.m. Monday.

At 6:55 p.m., another Cathay Pacific flight from Hong Kong arrived at MCIA with only six Filipino passengers on board.

Dicdican signed a memorandum, Monday, to declare a state of emergency at the airport as airlines canceled flights from China to heed the travel ban. Dicdican said the ban is disrupting at least 306 aircraft movements at the MCIA.

Airlines flying to China from Cebu have halted their services from Feb. 2, extending through the end of March for some routes.

Cebu is now restricting arrivals from Hong Kong, Macau and the Chinese cities of Chongqing, Shanghai, Chengdu, Jinjiang, Xiamen, Nanjing, Guangzhou and Shenzhen, based on the list of cancelled flights as of Feb. 3.

With the travel ban, Dicdican expected air and passenger traffic at MCIA to plunge, with China being a strong contributor to international arrivals in Cebu.

“It’s affecting travel. We’re looking at its economic impact. It might affect the concessionaires of the airport. It will have drastic effect that will cascade along the line,” Dicdican said.

“That is what we discussed in order to operationalize the quarantine of the Filipino arrivals,” Garcia said of the meeting which had to be cut short after she was notified about the arrival of the Hong Kong flight.

“We’ve agreed to put the protocols in place once the Filipinos or the permanent visa holders arrive, on how the BoQ and Bureau of Immigration will have their baggage treated and disinfected, and how their family members that might be at the airport shall be briefed,” Garcia said.

The governor said they also discussed the possibility of home-quarantine.

“Since right now the protocols are not yet in place, we need to further define how to secure them while they are in each of their homes, whether this be in the towns or cities,” she added.

DOH 7 Director Jaime Bernadas, for his part, told a media briefing that they have already identified quarantine centers in several parts of the province.

But DOH 7 is withholding details about the location of the centers for the patients’ privacy.

The maintenance of the centers and food for those quarantined will be shouldered by the Provincial Government, while DOH will spend for services and equipment.

Meanwhile, BoQ’s Bermejo noted that incoming flights at the MCIA had slowed down following the temporary ban on all persons, except Filipinos, directly travelling from China.

“Our distribution of the health declaration cards before was only limited to China flights. But beginning today (Feb. 3), we have started distributing health cards to all flights because there might be foreign tourists from China that will cross to other countries. Just to ensure, we’re requiring all arriving tourists to fill out their health cards,” he said.

As of 3 p.m. Monday, DOH 7 reported 15 persons under investigation (PUI) were confined in various hospitals across Central Visayas.

Eleven of these patients are in Cebu City, three are in Negros Oriental while the other patient is in Bohol.

Bernadas begged off from disclosing details on the PUIs to protect their privacy.

“All these PUIs have manifestations of the disease and are admitted to hospitals. PUIs are symptomic and have a history of travel to China,” he said.

l Michael Lenane, chief operating officer of GMR-Megawide Cebu Airport Corp., said they have designated an isolated holding area for passengers who are allowed to disembark from China flights.

This facility is closed off to non-essential airport employees and is connected to a separate bus bay to ensure proper handling and transport of the quarantined passengers.

Lenane also said intensified thermal scanning is being done on arriving passengers while hand sanitizers have been installed in all aerobridges and arrival corridors.

“My only concern is if it is possible to separate these passengers to isolate them from the other patients of the hospital,” said Cortes in Cebuano.

l Cebu Port Authority General Manager Leonilo Miole said cargo vessels from China will be allowed to dock only after the crew has served a 14-day quarantine at sea and only when cleared by health authorities.

Five cargo vessels enter the Port of Cebu weekly from ports in Hong Kong and Shanghai.

l The Cebu Provincial Board (PB) on Monday, approved a resolution declaring a “state of preparedness” in relation to the 2019-nCoV ARD. The resolution was filed by fourth district PB Member Kerrie Keane Shimura, head of the committee on health. (RTF, CSL, KFD, JCT, GCM / RHB )