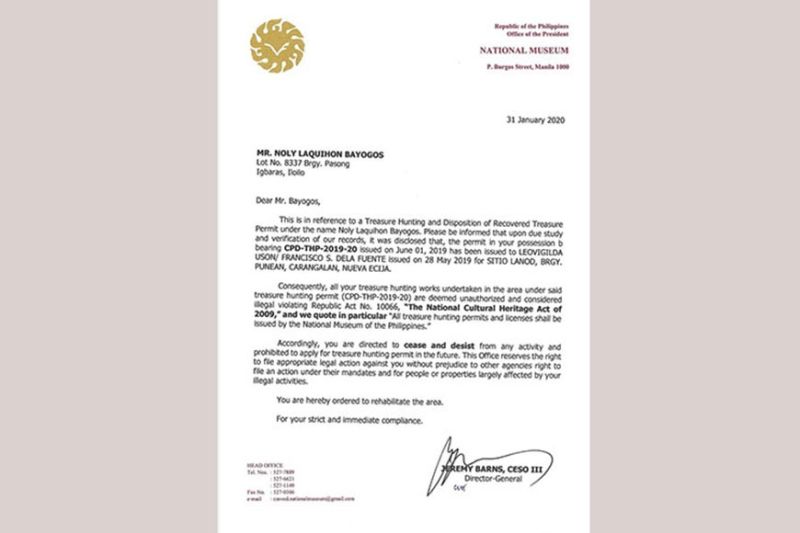 ILOILO. Copy of the letter issued by the National Museum of the Philippines to Nony Laquihon Bayogos.

THE National Museum of the Philippines (NMP) has ordered a group of treasure hunters in Igbaras, Iloilo to stop their illegal activities.

The NMP told Bayogos that the permit his group has been using was issued to another name for activities in Sitio Lanod, Barangay Punean, Carangalan, Nueva Ecija.

Barnes said Bayogos is violating Republic Act 10066, or "The National Cultural Heritage Act of 2009," which states that "all treasure hunting permits and licenses shall be issued by the National Museum of the Philippines."

Bayogos and his group were then directed to cease and desist from any activity. He has also been barred from applying for treasure hunting permits in the future.

Bayogos was also ordered to rehabilitate the area.

"This office reserves the right to file appropriate legal action against you without prejudice to other agencies right to file an action under their mandates and for people or properties largely affected by your illegal activities," Barnes said.

Esmeralda said earlier that a group of 10 people has been excavating a portion of Igbaras for more than a year now.

“There is a possibility that the soil (would) erode because the more they excavate, the more the base of the soil softens,” posing danger to at least nine houses in the area, he said.

He added that he sought the governor's assistance due to the environmental hazards posed by the illegal treasure hunting in the community.

Esmeralda also said that he found out that Bayogos' permit is illegal.

"The permit is not true like its being tampered or falsified document. This is a clear violation of our laws," he said.

Esmeralda said he also sought the help of the Philippine National Police and Philippine Army for the "hand-in of the cease and desist order" to the treasure hunters.

He added that he will consult his lawyers for filing of appropriate actions against Bayogos' group.