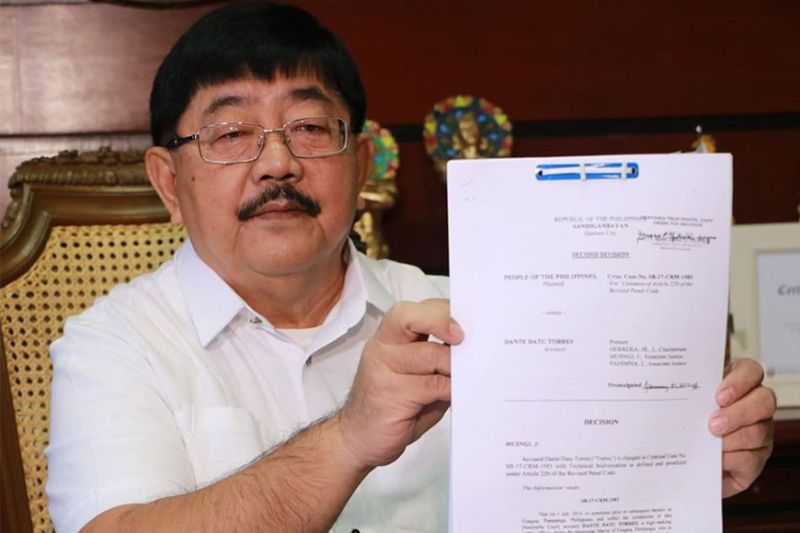 GUAGUA Mayor Dante Torres was teary eyed when the Sandiganbayan cleared him of the July 2014 technical malversation case filed against him by a certain Juan Pring.

The decision was issued January 31 and was signed by the Sandiganbayan Second Division.

It was also a triple victory for Torres, as he was cleared by two other courts of other charges filed against him.

The Regional Trial Court Branch 98 in Quezon City cleared Torres of the case of Falsification of Public Documents, while the Office of the Ombudsman dismissed the graft case filed against him by Pring.

The Ombudsman said the case had "no probable cause."

A 20-page decision, signed by Associate Judge Michael Musngi and Associate Justices Oscar Herrera Jr. and Lorifel Pahimna, ordered that Torres be cleared of violation of Article 220 (Technical Malversation) of the Revised Penal Code for "failure of the plaintiff to prove his guilt beyond reasonable doubt."

The Sandiganbayan also ordered the lifting of the hold departure order against Torres along with the release of the bond posted by the mayor.

The case stemmed from the alleged illegal use of P2.76 million in public funds in violation of Article 220 of the Revised Penal Code.

The funds were used for the rehabilitation of the Manuel P. Santiago Park.

The Sandiganbayan ordered his 90-day preventive suspension from office in relation to the technical malversation charges filed against him in 2018.

But Torres said that now that the Sandiganbayan has cleared his name, the results only show that the cases filed against him were merely politically motivated.

"Now, the people of Guagua may know that certain people had tried to ruin our reputation. The decision of the court is a vindication that we did not do anything wrong," Torres said.

Torres said he laments the many opportunities that the town had missed due to the issues and charges filed against him.

He added that while he does not contemplate on filing cases against his detractors, he will work harder to attract more investors and development partners to compensate for those that had been scared by the charges hurled against him.