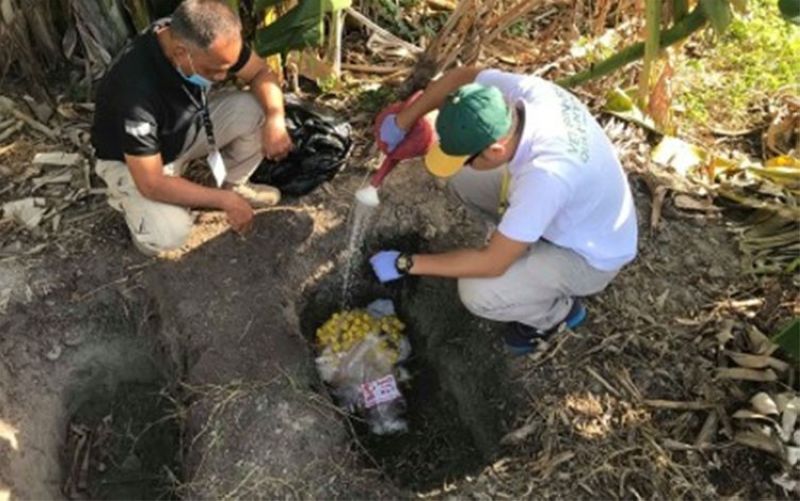 DUMAGUETE. Quarantine officers disinfect and bury three packs of processed pork at the Sibulan-Dumaguete airport that were seized from a passenger on board a Cebu Pacific flight from Manila on Tuesday (February 4, 2020). (Photo courtesy of the Bureau of Animal Industry)

QUARANTINE officers have seized processed pork from a passenger on board a flight from Manila that arrived around noon Tuesday, February 4, at the Sibulan-Dumaguete airport in Negros Oriental.

Veterinary quarantine officer Joseph Orellano intercepted the processed pork products and disposed of these by disinfecting and burying them.

There was no resistance from the passenger who carried it on board a Cebu Pacific flight, after the person was informed of the ban on entry of these products due to the African Swine Fever scare, Tundag said.

This is not the first time this year that quarantine officers have intercepted “hot meat” or unauthorized meat and its by-products.

Tundag said that just last week, they intercepted 12 tons (or about 11,000 kilos) of frozen raw beef from Cavite, which was transported via a ferry to Dumaguete.

The raw beef was offloaded last January 28 at the city port and brought to the Polar Bear cold storage in nearby Sibulan town.

However, upon inspection by the National Meat Inspection Service (NMIS) at the said facility, the raw beef shipment lacked pertinent papers.

Warren Cadeliña of the NMIS in Central Visayas and assigned in Negros Oriental discovered upon inspection that the shipment did not have a proper certification of “none co-mingling with pork products.”

“Even though the shipment is raw beef, without such certificate, there is no assurance that this has not been stored in the same facility with raw pork,” Tundag said.

He said co-mingling with pork in the same cold storage poses a risk of contamination of the raw beef.

They ordered the beef to be brought back to Manila and to its origin the day after it arrived in Dumaguete. (PNA)