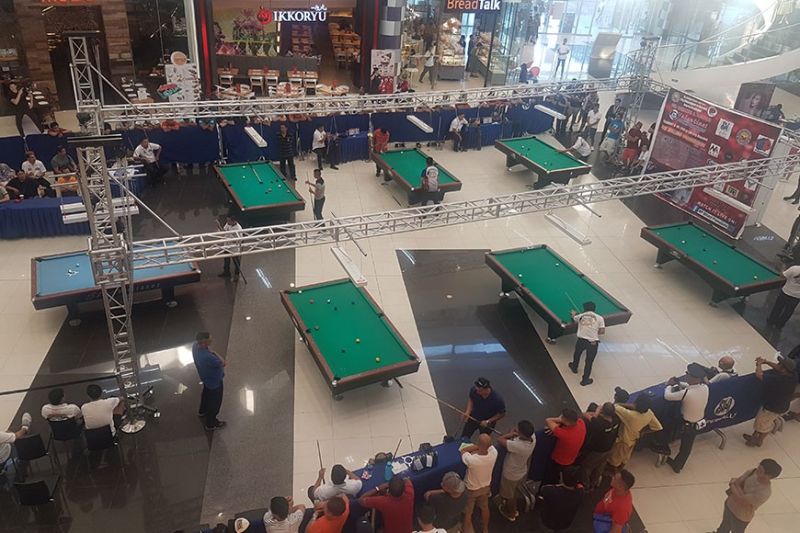 BACOLOD. Players from around the country kick off the Senator Manny Pacquiao 10-Ball billiards tournament at SM City Bacolod, pitting the skills of more than 100 players for top cash prizes. (Contributed photo)

BACOLOD City will be seeing pool action from the country’s top players at the Manny Pacquiao 10-ball billiards tournament, which opened Tuesday at SM City Bacolod. The games will run until Valentine’s Day, February 14.

The event is presented by MP Promotions in cooperation with the City of Bacolod. Tournament organizer Mary Grace Tambasen and tournament director Michael Feliciano said that they are happy to bring this event to the City of Smiles. “Billiards enthusiasts and SM mallgoers have this opportunity to watch the game of professional pool live in action, to see multi-awarded players, and get to know the next generation of athletes who are making a name in the world of pool,” said Feliciano.

The Manny Pacquiao Valentine’s 10-Ball Open Tournament will feature the double knockout format. At stake at the singles event is P150,000 for the emerging champion, while the second placer will receive P75,000. Third and 4th placers will take home 30,000, 5th to 8thr placers at P15,000 each and P5,000 for the 9th to 16th placers.

The games may also be watched live on social media via the Facebook page MP Billiard Promotions.

The City of Bacolod, under Mayor Evelio Leonardia, is in full support of various sports development programs. Organizer Mary Grace Tambasen, who hails from Bacolod, said that they are thankful also to the City for supporting a worthwhile event. “Billiards, like boxing and chess, is one of the sports where we can produce world champions,” she said. (PR)