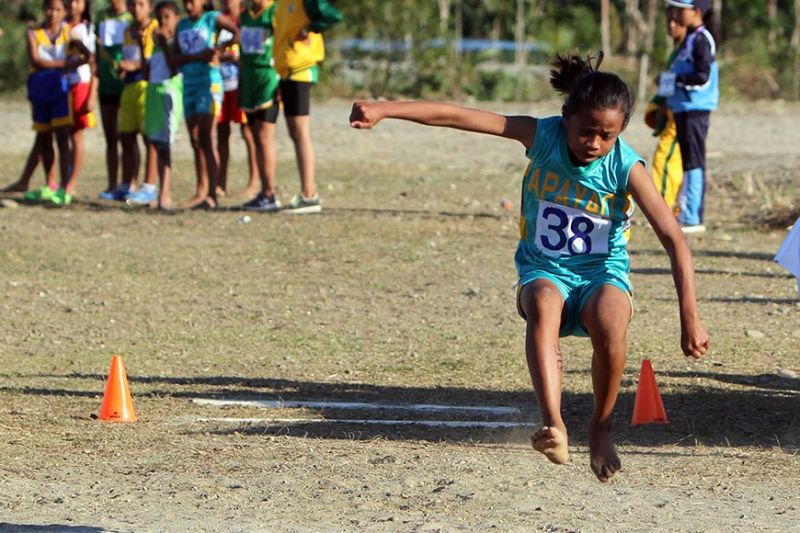 BAGUIO. Apayao’s Ezekiel Balyao leaps 4.22 meters to win the gold medal in the elementary girls long jump event during the 2019 Cordillera Administrative Region Athletic Association hosted by the province. Athletes coming from the six provinces and two cities will have more time to gear – up for their event following the postponement of the regional meet. (Roderick Osis file photo)

THE annual regional sports meet will be moved last week of March.

Putting in mind the safety of all delegates from the six provinces and two cities, the 2020 edition of the Cordillera Administrative Region Athletic Association (Caraa) will see action late March following a Department of Education (DepEd) memorandum.

In the memorandum issued February 4, DepEd said in the interest of public health, all public and private basic education schools and learning centers are duty-bound to exercise due diligence and take precautionary measures to minimize exposure to risks associated with the 2019 novel coronavirus acute respiratory disease (2019-nCoV ARD) and support government efforts to contain the spread of the virus.

“Upon advice of DOH, all national and regional activities involving learners and/or teachers requiring travel and congregation of various schools, divisions, and/or regions are suspended. The Department shall periodically evaluate the necessity of suspending such national and regional activities, and shall, every Monday and/or when the need arises, announce whether such suspension shall continue, depending on the development of the situation and upon the advice of DOH,” the memo stated.

The DepEd memo added all division and district activities that involve the gathering/congregation of various schools are highly discouraged and organizers are advised to seek the recommendation of local health authorities should the activities push through.

Only events taking place this February, which includes Caraa, is covered by the DepEd memo.

Originally slated February 16 to 21, Caraa will be hosted by Baguio City as it defends the overall title against Abra, Apayao, Benguet, Ifugao, Kalinga, Mountain Province, and Tabuk City.

Baguio City Lions are hoping to duplicate the feat this year after harvesting 205-110-79 gold-silver-bronze medal haul during the games held in Apayao last year.