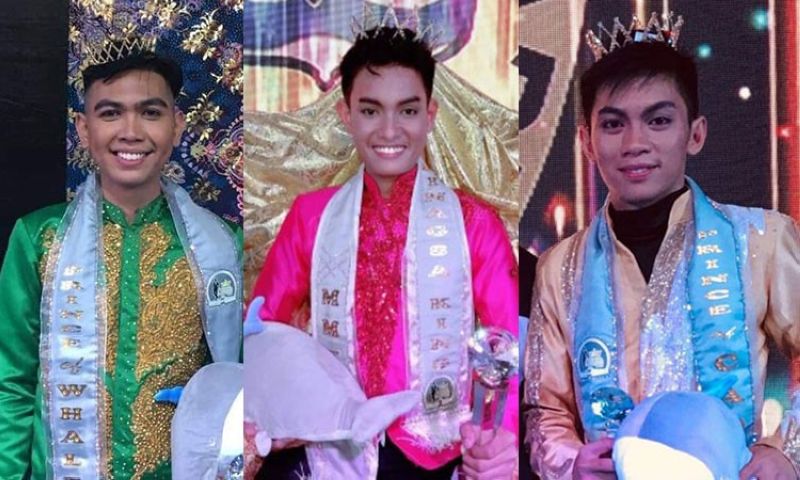 CADIZ City is home of the famous Dinagsa festival, which is considered one of the most sought-after festivals in the Visayas. Consequently, it is quite inevitable to consider it as being one of the most talked-about celebrations.

Dinagsa Festival is an annual observance of the feast of the Holy Infant Jesus, locally known as Señor Santo Niño de Cadiz.

During last month's commemoration of Dinagsa Festival 2020, a pageantry of the city's finest sons was staged. Dinagsa King 2020 was a matching battle of wits, looks, character and purpose.

During the pageant night on January 20, at the Cadiz Arena, the finest young sons of Cadiz City vied for the title. Each candidate highlighted their respective advocacy of choice as a platform towards the crown.

Adrian is driven to become a doctor, or a teacher someday. Born in November 17, 2001, this 18-year-old looker hails from Barangay Cabahug, Cadiz City. He finished his grade school in Yee-on Elementary School as the class valedictorian. He graduated his secondary education from Faraon Institute, Cadiz City with high honors. Currently, he is finishing his Senior High School at Dr. Vicente F. Gustilo Memorial National High School-Humanties and Social Sciences (HUMSS). This promising young intellectual enjoys reading, writing, and watching documentaries.

Back in Junior High, he was hailed as Mr. Faraon Institute 2018. As he moved to Senior High, he was crowned Lakan (Cadiz City Schools Division) in 2019, and eventually, he won the title Mr. Trashformation 2019 2nd Runner Up (Dep-Ed Region VI). Raidar is currently the editor-in-chief of The Vicentinian Star, a publication in his Senior High School.

Raidar emphasizes, "Let us all be united for it is the key for a much progressive and brighter future."

During his final interview, Raidar praised Cadiz City as indeed one of the most progressive cities, not just in Negros but in the whole country as well.

He said, "We are so blessed by God through our Patron, Sr. Sto. Niño and with their strong and effective leaders we have in our society. So, this leadership would be useless without unity, cooperation, and discipline among us, Cadiznons."

He added: "I believe that we must all be united because if we are one as Cadiznon with one goal and with one pure heart towards economic and environmental prosperity and sustainability, then Cadiz City will push more forward and progress much faster for generations and generations to come."

With his gentleman persona oozing with wits, good looks and charisma, Mr. Raidar Lasala made history as he was triumphant in bagging the crown of Dinagsa King 2020. He also booted the "Mr. Trishas Beauty Haven Salon and Spa" corporate award.

Here is Raidar's message for the people:

"My dearest Cadiznon, we are now on track in the path of a brighter future. If we want to sustain and improve the growth of our city, lets us all be one as Cadiznons and hold on together for every adversities our society may encounter. I am your Dinagsa King 2020, calling for unity, discipline, and cooperation for the future of Cadiz City and for our country."

He is quite proficient in both English and Chinese, which will later come handy since he dreams of becoming an owner of his own travel agency, an interpreter and a professor. He currently works as a teacher, which allows him to share his expertise on health and language. Born in July 28, 1997, this 22 yuppie is a true blue Cadiznon from Zone 1. He took both his elementary and secondary education in St. Johns Institute in Bacolod City. He graduated from his Chinese Education at Jinan University in Guangzhou, China. He is currently taking up his Master's Degree in Arts in Education, Major in English Language from the University of St. La Salle, Bacolod City. Adrian is fluent in both Chinese and English.

Adrian's guiding philosophy in life is to have the serenity to accept the things we cannot change, to have the courage to change what we can, and the wisdom to know their difference. His answer in his final interview for the pageant was as follows: "Cadiz City has been a municipality for over 52 years. Yes, we have been through a lot already. Such as, being attacked by pirates and the typhoons Yolanda and Ondoy. Nevertheless, we are still living up to our vision statement which is being resilient to adversities. As a matter of fact, just last year, we were awarded as the most-improved city in the Philippines. And so how can we help improve the economy I think is not only through the leadership of the local government but also of the unity and cooperation of us Cadiznon, as well as the grace of our very own Patron Saint, Sr. Sto. Niño de Cadiz which makes me a very proud Cadiznon."

Here is Adrian's message to the people: "Take risks. Step out of your comfort zone. Because the defeated are those who never tried, they will never be winners of life. Always remember to look not on the struggles but on the learnings and realizations you'll have afterwards."

Finally, let's also get familiar with the Prince of Whales. This year's Prince lf Whales/ the Second Runner Up is Mr. Res Glimmer Tiaño. Res also won as the Advocacy King as he champions for Environmental Education.

He has high hope of becoming a teacher. After which, he plans to proceed in taking up Law. Born in December 16, 1999, this 20 year-old young professional hails from Zone 1, Cadiz City. He is an alumni of Ramon Magsaysay Elementary School & Tanon College in San Carlos City. He is currently in his sophomore year in college taking up his Bachelor's Degree in Social Science Education from the Philippine Normal University Visayas in Cadiz City. He enjoys reading books, watching movies, playing volleyball, writing poetry and hosting

This young gentleman is not a stranger to male pageants as well, having belted numerous titles such as Mr. Freshies 2018 and Mr. PNUV 2018 Eco-Warrior, 2nd Runner-Up. Aside from being a consistent honor student from high school up to college, he was also active in various fields. He was elected as SSG President in high school and as Class Mayor in his first year in PNUV. Res is active in all academic endeavors like in news writing competitions, oratorical and extemporaneous speech contests. In 2017-2018, he was a National Discipline Awardee of A. Yuchengco Foundation.

During the pageant, his answer in the final interview is: "As proud Cadiznon, I think this question focuses on my advocacy which is environmental awareness among young people through education. It is about time that we need to focus more in inculcating our youth, our young children so that they will be well-informed about the importance in protecting our environment. It is also something to be proud of, as a proud PNUan, as the Center for Environment and Green Technology Education, we inculcate the importance of preserving and protecting our environment. And we can do that through recycling."

Here is Res's message to the people: "To my fellow Cadiznons, I am truly honored for this crown you have bequethed upom me that symbolizes both our commitment to promote the welfare of our beloved Cadiz. I hope and pray, that my reign as your Prince of Whales will be blessed with opportunities for me to carry out our common aspirations and amplify my advocacy that reflects your voices and inputs. With your help and support, I know I can prove my worth and do better to show to everyone that the best princes are made not born."

Raidar, Adrian and Res. Three different personalities with three different platforms. Now that we are more familiar with the gist of their persona, may we as Negrenses be able to take heed and support their advocacies in the spirit of humanitarianism. Let us support them as they champion their cause in promoting human welfare to build a better future for Cadiz, and for Negros as a whole.