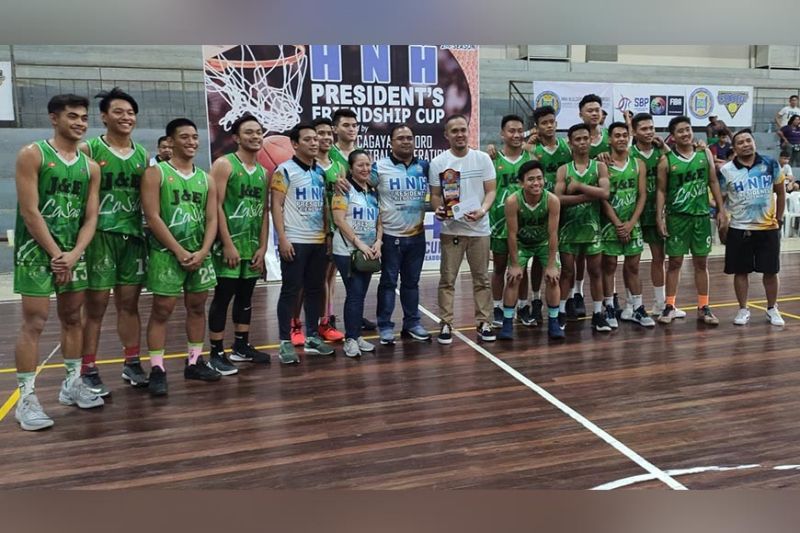 WITH less than 10 seconds left, J&E La Salle Iligan made three passes from inbound play. And big man Algeroh Benitez, the last ball receiver, sealed his defender to score a basket from underneath as the visiting team from the City of Waterfalls completed a come-from-behind 100-98 win in 18-under championship of the HNH President's Friendship Cup 2019-20 2nd Season on Sunday, February 9, at the Corpus Christi gym, Cagayan de City.

It was a heartbreaking loss for the CDONHS City High Tigers of coach Bismark Labadan, who led by 10 at the start of fourth quarter, only to melt in the face of La Salle's full-court press defense.

The reversal also put to waste the 30-point production made by City High ace guard Valiente.

"Just like a pointguard always do, deliver when it matters, we just drew a basic high-low play to squeeze a quick seal in the middle for our dominant big man and mythical 5 member Benitez. And.. boom he did," said La Salle's head coach Dane Lariosa, a former Corpus Christi Knight and erstwhile teammate of one of CDO'S most decorated bench tactician Rey Dangcal, referring to his "now famous" final timeout.

The game saw at least four lead changes, and after the home squad pulled through by double digits, season MVP PJ Rebalde motioned to Iligan bench for an all-out trapping defense.

The strategy paid off as La Salle seized the momentum around 4 minutes remaining in the final fourth quarter, padding the lead to 7 points.

Then Valiente retaliated, exploding for six straight points of his own that cut the lead down to one.

It was a see-saw battle from then on.

Jaspher Sumalpong, another Mythical 5 pick, provided the needed spark down the stretch when La Salle badly needed one.

With La Salle hanging on a slim edge, 98-97, Valiente was fouled by Tiger Estrera with 12 seconds left. Valiente split his freethrows to tie the score at 98-all.

It was at this juncture that Lariosa called for a timeout.

"But as a whole, it was a team effort on both ends of the floor. Players who trust the system and trusted each other. A very selfless team who doesn't care who gets the credit," added Lariosa, who thanked J&E Integrated Farm owner Jessie Sulague, the Estrera family and school principal Jay Velez for all the support.

"This is for the City of Iligan and the whole La Sallean community," added assistant coach Justin Villamor.

"It's not easy to bankroll a basketball tournament on a regular basis. We're very thankful that someone like Sir Rafols has the heart to support this kind of development nga pabor kaayo sa mga kabatan-onan," acknowledged tournament director Stephen "Kuya Pong" Dacoco.

Labado topped La Salle with 20 points. Estrera and Sacabin came up with 16 and 15 each as Rebalde and Benitez doled out 13 markers apiece.