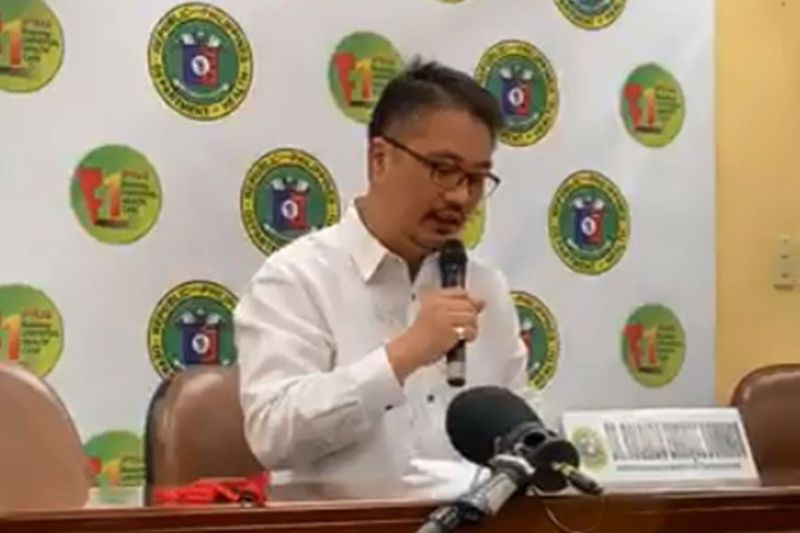 MANILA. Department of Health spokesperson Undersecretary Eric Domingo gives updates on the condition of Filipinos repatriated from Hubei, China and number of patients under investigation for the 2019 novel coronavirus, among others, in a press briefing Monday, February 10, 2020. (Screenshot from DOH video)

THE Department of Health (DOH)-Central Luzon has declared code blue on all hospitals and health offices in Central Luzon, as the repatriated overseas Filipino workers (OFWs) from virus-hit Hubei, China arrived in the country on Sunday, February 9.

The health department noted that code blue is aimed at catering to the immediate medical needs of the repatriated OFWs during their 14-day quarantine.

It added that the declaration covers all government and provincial hospitals, as well as provincial, city and municipal health facilities across the region.

"The DOH will be taking charge of the management, coordination and logistics of the entire quarantine process. Rest assured that repatriated OFWs will be attended and treated with utmost care through regular monitoring," it said in a statement.

Aside from the quarantine process, the health agency also noted that the OFWs also underwent three levels of screening before they were able to fly home. These include the screening prior to boarding the plane, where where they were screened as to whether they are symptomatic -- or those that have fever, cough or colds -- or asymptomatic. Only those asymptomatic were allowed to board.

Close monitoring was also conducted during the flight to check if there will be passengers who manifest symptoms of the novel coronavirus, and another assessment was also done upon their plane's landing at the Haribon Hangar.

The DOH said all 32 OFWs showed no signs and symptoms of the virus, hence were all sent to NCC.

During the quarantine period, the DOH said all basic necessities of repatriated migrant workers were provided, including hygiene kits and meals.