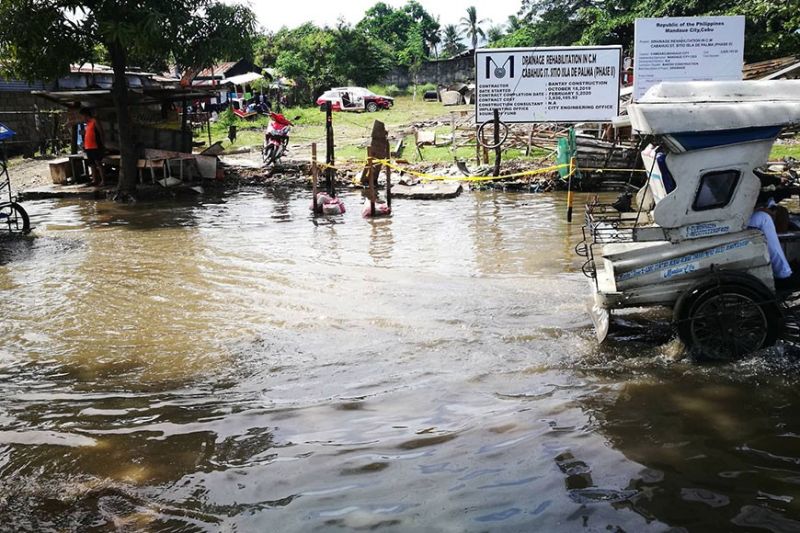 “CULPRIT.” A heavy downpour Monday morning, Feb. 10, 2020, caused water to rise on A.C. Cortes Ave. in Mandaue City. A traffic official blamed the flood on an unfinished drainage project of the Department of Public Works and Highways in the area. (Sunstar Photo /allan Ciuizon)

HEAVY rainfall in Metro Cebu caused knee-high floods at the foot of the first bridge, resulting in heavy traffic in the cities of Lapu-Lapu and Mandaue Monday morning, Feb. 10, 2020.

Vehicles moved at a snail’s pace on the two bridges connecting Cebu mainland to Mactan Island from 7:30 to 10:30 a.m.

Arnold Malig-on, traffic monitoring head of Traffic Enforcement Agency of Mandaue (Team), blamed the flood on the unfinished drainage project of the Department of Public Works and Highways in the area.

He said some of the multicabs that passed the area ended up breaking down.

Traffic enforcers in Lapu-Lapu City also rerouted traffic from the first bridge to the second bridge, which confused many motorists.

Mario Napule, head of the Lapu-Lapu City Traffic Management System, said they tried their best to assist motorists, but they couldn’t do anything about the traffic gridlock going across the channel.

Al Quiblat, chief of the Philippine Atmospheric, Geophysical and Astronomical Services Administration (Pagasa) Visayas branch, said the bad weather was due to the “amihan,” or northeast monsoon.

Cebu will experience light to moderate and occasional rains in the next few days, based on the weather forecast, Quiblat said.

However, Cebu can expect better weather on Tuesday, Feb. 11, he said.

A.C. Cortes Ave. wasn’t the only street in Mandaue City that experienced flooding Monday morning. Lopez Jaena St. in Barangay Tipolo and the back of the Ibabao-Estancia Barangay Hall were also affected.

The DRRMO, which had been monitoring the Butuanon River, said the water level had risen around 4 a.m. Pagasa issued an orange warning, which meant residents should be on alert for possible evacuation because flooding was threatening.

Suico said the volume of water that fell on Monday was more than the downpour last Thursday, Feb. 6.

He requested the public to help them monitor the flood in Mandaue City and to report any incidents to their command center. (KFD, FVQ, JCT )