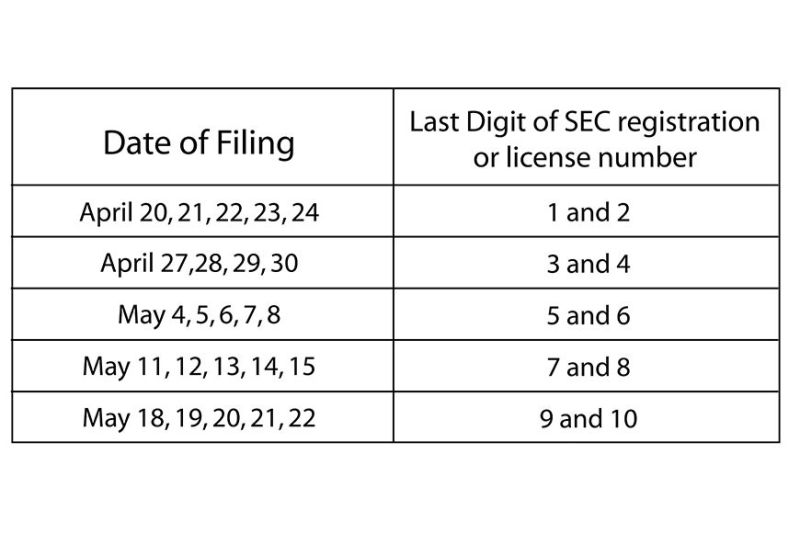 1. All corporations, including branch offices, regional headquarters and regional operating headquarters of foreign corporations, shall file their AFS depending on the last numerical digit of their SEC registration or license number in accordance with the following schedule:

All SEC satellite offices and extension offices in Cebu, Iloilo and Davao shall be governed also by the said coding schedule in 2020. However, corporations may file on or before their respective filing date.

2. The filing schedule above shall not apply to the following corporations:

These entities shall file their AFS within 120 calendar days from the end of their fiscal year;

b) Those whose securities are listed on the Philippine Stock Exchange (PSE) and those whose Securities are registered, but not listed in PSE and Public Companies, covered under Sec.17.2 of the SRC: These entities shall continue to observe the due date for filing their AFS (within 105 calendar days after the end of their fiscal year) as attachment to their Annual Reports (SEC Form 17-A), in accordance with the Implementing Rules and Regulations of the Securities Regulation Code.

c) Those whose AFS are audited by the Commission on Audit (COA), provided that the following documents are attached to their AFS:

(i) An affidavit signed by the president and treasurer (or chief finance officer, where applicable), attesting to the fact that the company promptly provided COA with the financial statements and supporting documents and that the audit of COA has just been concluded; and

(ii) A letter from COA confirming the information provided in the said affidavit.

3. All corporations may file their AFS regardless of the last numerical digit of their registration or license number on or before the first day stated in the coding schedule;

4. Late filing or filing after the respective due date shall be accepted beginning May 25, 2020 and shall be subject to the prescribed penalties, which shall be computed from the date of the last day of filing schedule stated in paragraph one;

6. The basic components of the AFS, as prescribed under SRC Rule 68, as amended, shall be submitted by filers. Failure to comply with any of the formal requirements under SRC Rule 68, including the prescribed qualifications for independent auditors and/or any material deficiency or misstatement that may be found upon evaluation of the specific contents thereof, shall be considered by the SEC a sufficient ground for the imposition of penalties. The acceptance and receipt by the Commission of the financial statements shall be without prejudice to such penalties.

7. The General Financial Reporting Requirements, as stated in the Revised SRC Rule 68, which was approved by the commission en banc on Aug. 19, 2019, states the threshold for an AFS is as follows:

b) Non-stock corporations with total assets or total liabilities of P600,000 or more as prescribed under the Revised Corporation Code and any of its subsequent revisions or such amount, as may be subsequently prescribed;

c) Branch offices/representative offices of stock foreign corporations with assigned capital in the equivalent amount of P1 million or more;

d) Branch offices/representative offices of non-stock foreign corporation with total assets in the equivalent amount of P1 million or more;

e) Regional operating headquarters of foreign corporations with total revenues in the equivalent amount of P1 million or more.

Financial statements of branch offices of foreign corporations licensed by the SEC to do business in the Philippines shall comply with the requirements of SRC Rule 68, unless otherwise determined by the SEC as not applicable.

8. Corporations that do not meet the threshold stated in Item 7 may submit their AFS with only a duly notarized Treasurer’s Certification (rather than an Auditor’s Report).

1. All corporations shall file their GIS within 30 calendar days from:

c) Foreign corporations – anniversary date of the issuance of the SEC License.

SEC Memorandum Circular 2 modifies or amends all other circulars, memoranda and implementing rules and regulations that may be inconsistent with the foregoing provisions, and shall be published in two newspapers of general circulation.