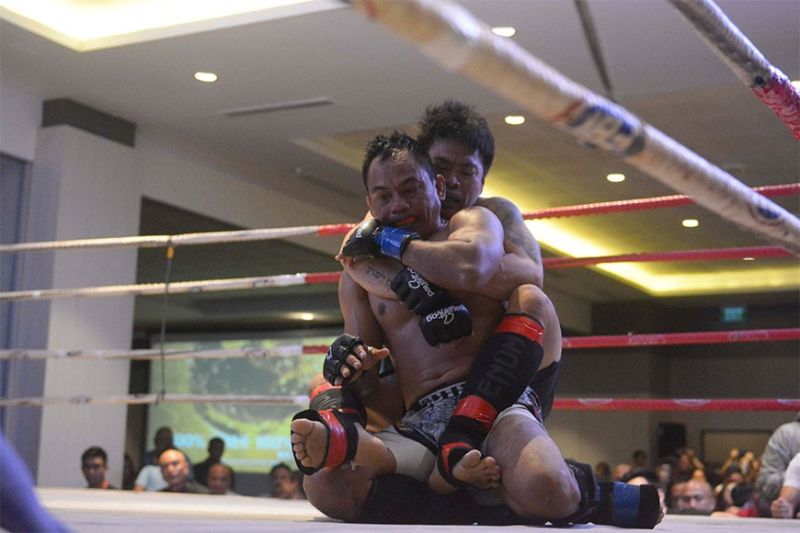 BACOLOD. Bryan Bendanillo taking the Back of Rubin Jaculbe and looking to sink a rear-naked choke in the undercard fight of the 6100 Fight Fest II. Bendanillo won via unanimous decision. (Mymy Alagaban Photo)

IT WAS a great night for Mark Peronce of 6100 Martial Arts and Fitness-Bacolod when he beat Mike Bunag of Vagabond MMA of Cebu via unanimous decision in the main event at 155 lbs division of the recently-staged 6100 Fight Fest II at the Ayala Capitol Central Hall.

Meanwhile, in the co-main event, Bacolod Fight Club’s Ace Tupas knocked Wilfred “The Silent Killer” Manogura of Dipolog Top Team in 2:58 minute of the opening round of the 170 lbs category as Dave “Speedy” Gonzales of 6100 Martial Arts and Fitness-Bacolod halted Ronnel “The President” Dulman of President 365 - Iloilo in 2 minutes of the 1st round.

Bacolod Fight Club’s Julius “The Unpredictable” Alipato came out with a quick 44-second stoppage in the opening round against Jezrel Angcon of Vagamond MMA of Cebu while Franklin “Smooth” Olimpos of 6100 Martial Arts and Fitness-Bacolod halted Dipolog Top Team’s Mawe “The Young Gun” Abang in 1:12 minute of the first round.

In the other card, Mark Mayang of Tribu Hangaway-Bacolod defeated GJ “The Warrior” Wagner of 6100 Martial Arts and Fitness-Bacolod via unanimous decision in the 155 lbs division as Bacolod Fight Club’s Leo “The Reaper” Panes ruled out Eduardo Cadavedo of Dipolog Top Team in 0:48 seconds of the third round.

6100 Martial Arts and Fitness-Bacolod’s Rodgie “The Panther” Aquino only took 1:33 minutes of the 2nd round to win over Reymart Espera of Tribu Hangaway-Bacolod via TKO.