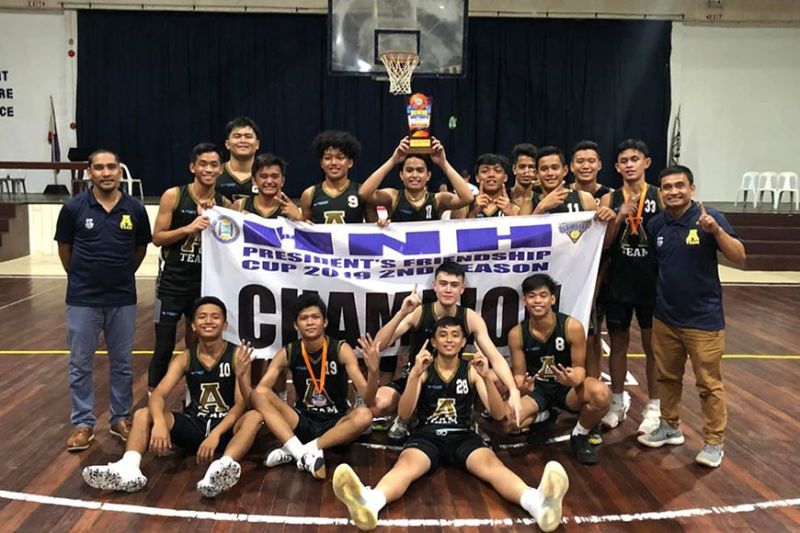 BARELY overcoming Bethel Baptist School for the 12-under crown (73-72), host Corpus Christi School tried to go 2 out of 2 in the triple-header finals when the CCS Knights fought for the last championship game of the day.

J&E La Salle Iligan earlier pulled a pulsating 100-98 squeaker over the City High Tigers for the 18-under diadem. And Corpus Christi fans were still riding on the crest of their elementary team's conquest of the Valencia City-based Bethel Baptist School.

They were excited at the thought of a possible twinkill finish.

But the selection team of coach Arvin Martinez, whom he fondly called "fruit salad" and anchored by the slam-dunking Justine Bandino and brainy wingman Danniel Harris, came armed to the teeth to hammer out a 80-75 victory for the 16-under title of the HNH President's Friendship Cup 2019-20 2nd Season concluded on Sunday, February 9 at the Corpus Christi gym, Cagayan de Oro City.

Representing "A" Team-City Lights-SPC, the heftier wards of Martinez dictated the game early leading most of the way when the highly-partisan crowd and supposed homecourt advantage worked wonder for their slight underdog rivals.

A late rally punctuated by Hanz Pestaño's buzzer-beating wild shot from beyond mid-court range tied the score at the half, 42-all. And inspired by the crowd's lusty cheers, the home squad took a 4-point lead for the first time at the start of the third quarter.

But to everyone's great surprise, it was also in this very quarter that "A" Team hoopsters start to heat up and blend well as they timely regrouped to wrest back the upperhand and post a lead by as much as 14 points.

Gutsy guard Pestaño and bull-strong Jose Carlos Saldon made up for the hot-starting slasher Lance Colin Lanuza who went cold at the onset of the final fourth quarter. Together, they led another uprising that cut "A" Team's commanding lead to just six, 58-64 with still 7:42 to go.

With the pair of back-up centers Jose Miguel Escalderon and Mangondadato and the rejuvinated Lanuza joining in the fray, a wild and wooly match ensued in the remainder of the payoff period.

Unfortunately for the homecourt favorites, the spring-chicken Bandino -- whose only slam attempt rimmed out -- proved effective when not forcing the issue. He decided to attack the hoops and pass the ball to the open man that led to a dynamic team play alongside Christian Mcginly, Martin Saldon, RJ Colonio and defense specialist Harris.

Worse, Corpus Christi's premier pointguard Pestaño suffered cramps for the second time and limped out to the bench with only 40.8 seconds left and "A" Team leading by five, 76-71.

Still, the Junior Knights were still in the thick of the fight after Escalderon's difficult inside basket put Corpus Christi to within three, 75-78 with 11.8 ticks remaining.

It was at this juncture that the referees slapped a Knight defender for unsportsmanlike foul that awarded "A" Team with 2 free throws plus ball possession.

Coach Martinez, who always emphasized "Kadula Dili Kontra" as his game mantra, was quite relieved after a successful comeback trail in coaching junior basketball.