Couples who met online (...and are now very happy) 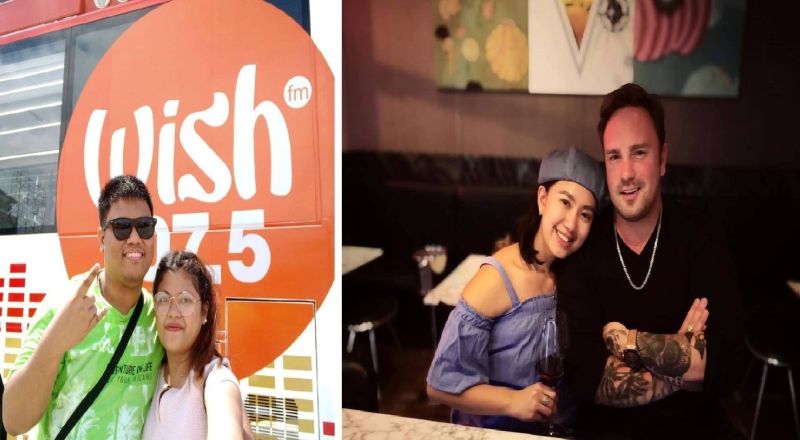 IN THE same way that social media scrolling on our mobile phones had been part of our routines before hitting the sack at night, so is swiping left and right for some single people out there.

After a long day's work, head home, and see if there are interesting people to talk to on Tinder, Bumble, or OkCupid. Different process for different apps but the objective is the same: to find a match.

But dating apps have their reputation. Some use it to look for hook-ups, fubu, or one-night stands. So it's extra challenging if you're a genuine single soul looking for a romantic match and a serious relationship. But dating app stories are not all awkward first dates that weren't followed by a second. On some lucky, kilig circumstance it does end up with a romantic relationship or even an "I do."

Boredom brought Paolo to Tinder one day. He had been out of a relationship just a year before and most of his friends had started getting busy with their respective careers. He was laughing when he shared that believable or not, he was actually on Tinder because he was looking for a new friend. It took him multiple swipes and even a hop to another app, Slowly, before he was able to Tinder-match with Heart.

"In the long run, maka-feel gyud ka'g something na dili nimo kailangan pugson. (You will feel that something between you that doesn't need to be forced)," Paolo shared.

During their conversations, they both learned that they are mutually interested in the visual arts. They decided to meet up and take things more seriously.

"Four to five months ang ligawan (courtship period). I gave her appreciation gifts in that span of time. Nagasulat ko'g letter, corny siya paminawon karon pero underrated na siya kay through Facebook na lang ang mga tao (I wrote her letters. It may sound corny now but that's only because it has become underrated because of Facebook)," said Paolo.

Now, both Heart and Paolo are happy in the relationship, celebrating their first year together soon.

Facebook, as everyone who has it knows, is a social networking site where people meet long-lost friends, new friends, and do professional connection. Who would have thought that fiancées Uriel and Pam would meet here on Facebook?

They didn't meet on the dating feature of Facebook. They met on a public Mental Health Facebook page where discourse on mental health takes place. Pam, who was diagnosed as bipolar, would find relief and aid in dealing with her situations through the Facebook page. Little did she know she would also find the love of her life there.

Not too long after Uriel added Pam as friends on Facebook, they learned of how much they are mutually interested with music, most specifically the Beatles and Queens. While Uriel sings and plays the guitar and keyboards, Pam is a huge fan of music. Eventually, after they decided to officially be a couple, they would go to music-related events like the Mindanao Pop bootcamp and so many more.

Pam had been single for five year, Uriel for a year when they met each other. "It's about keeping your promise. Ayaw gyud promise kung wala ka plano tumanon na. Nagpromise ko I will take care of her," said Uriel.

On December 15, 2019, just after one of those frightening earthquakes, Uriel asked Pam to marry him. And obviously, he flustered when she said yes.

For people who know her, Karla has always displayed the strong, independent woman vibe. She started using Tinder in 2015 having grown tired of a limited network of people she has in the city. She travels a lot and would want to expand her network to as far as wherever her travels take her. When she met Mitch on Tinder, the first thing they talked about was their favorite comedians and how stand-up comedy should be given more attention. They also explored discourse on business, travel, and their own Filipino and Canadian cultures.

"We basically decided to meet after 15 minutes of talking online. He was near the hotel where my event was at...The first meeting was great, but there really weren't any romantic sparks. In fact, I dated someone else after him, but we added each other on Facebook so we were updated on each other's lives," Karla shared.

Karla was single for half a year, Mitch for two years when they met. But unlike the other Tinder couples who hit it after the first and second date, Mitch and Karla haven't been in touch for three months after the first meeting. But as they say, fate will find a way. It was their being entrepreneurs, writers, and inspirational speakers that have brought them together. Now they've been happy as a couple for three and a half years now.

"My advice to people who are trying their luck on dating apps and websites -- participate with clear intentions and never lower your standards because these will really dictate the level of happiness you will have and the growth that you will get. I waited for the right guy who surpassed all of my nearly impossible standards and I've never been treated better, never been happier, never grew this much. I tell you guys -- it's so damn worth it."

Her friends had been bugging her to try Tinder already. She later learned that a lot of people on the app are looking for a hook-up so she decided to delete it. But not before Cass had already given her Viber number to someone she matched on the app -- Tim. Unlike Cass, Tim was a frequent user of dating apps but for some interesting reasons, for the many women that he matched with, it was Cass that he ended up talking to.

"We were both makulit and bubbly -- more of an intellectual banter really. We talked about politics, travel, food, and stuff," Cass talked of their first meeting. Cass was single for a year, Tim for two and a half years, when they met.

"We were together for three and a half years before deciding to get married. Communication, compatibility, compromise, maturity, and most importantly, commitment, made it work. Prayers, too, a lot of prayers," Cess shared.

On their years of being together, the couple had already shared beautiful experiences together especially during their trips abroad.

They recently decided to tie the knot -- on February 2, 2020. Cess and Tim are currently in Japan for their honeymoon.