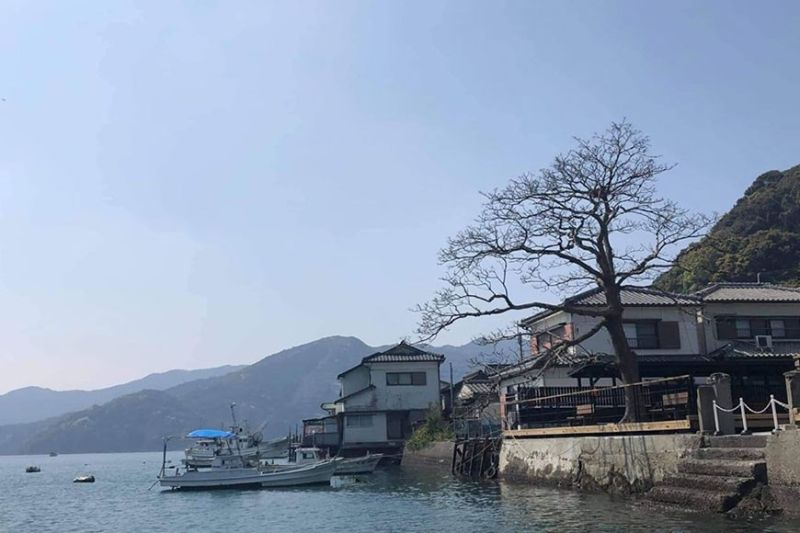 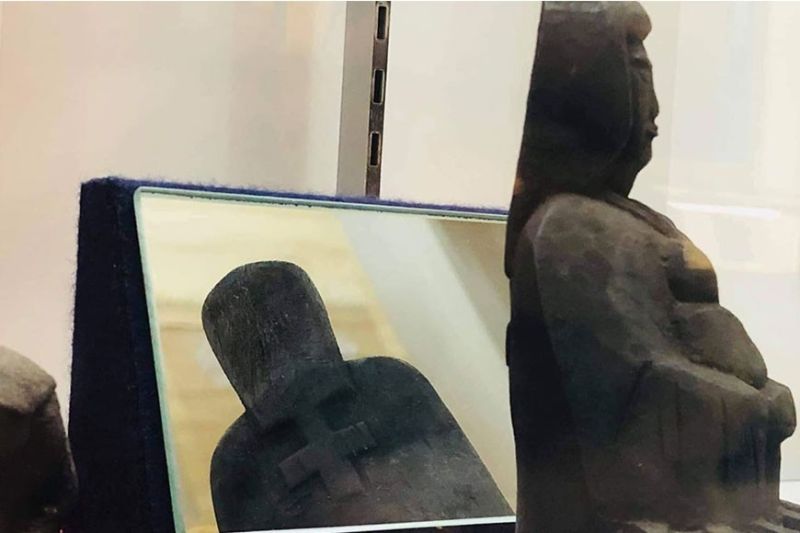 JAPAN. Maria Kannon is a statue of Buddhist deity, Kannon, who was secretly venerated as an image of the Virgin Mary during the suppression of Christian faith. (Contributed photo) 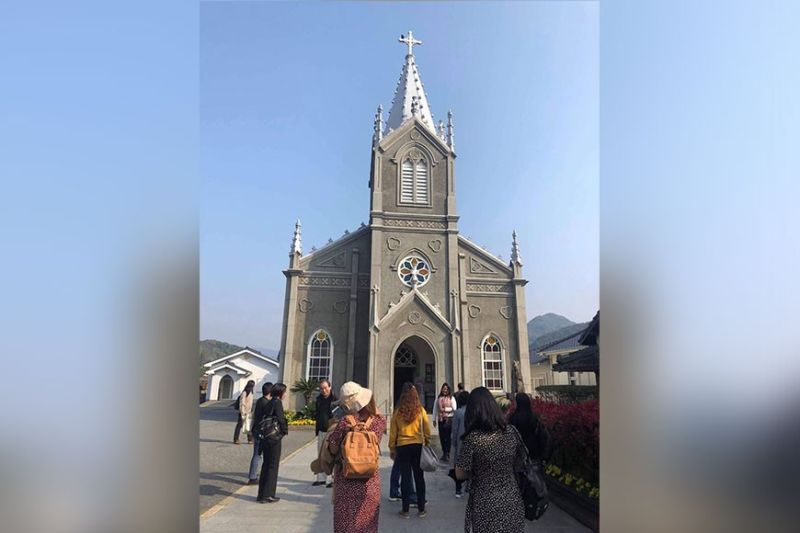 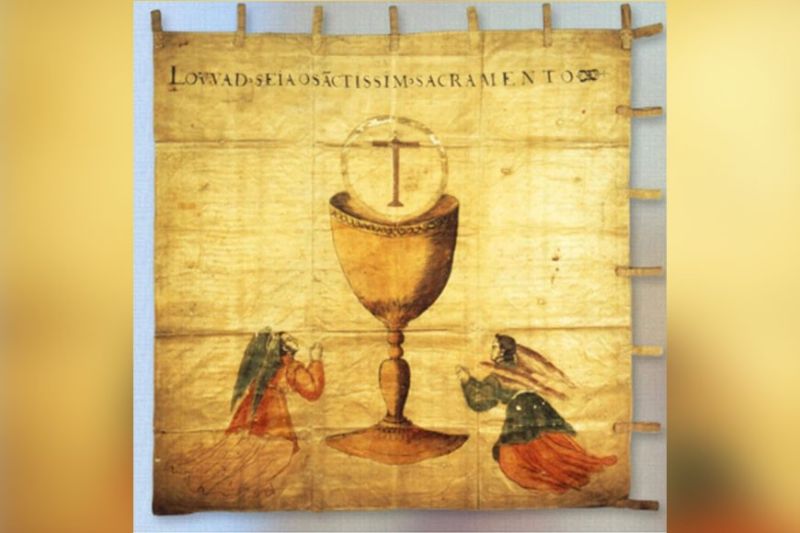 JAPAN. Amakusa Shiro’s war chest flag which still shows bullet and blood stains. The text is translated to “worship the divine sacrament” (of the Holy Eucharist). The flag is exhibited inside the Amakusa Christian Museum. (Contributed photo) 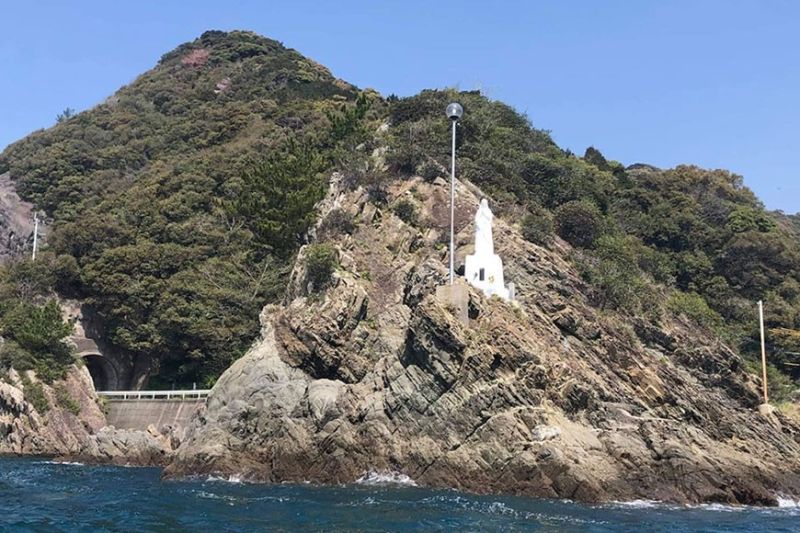 JAPAN. The Statue of the Virgen Mary on the Cape watching over the fishermen at Sakitsu Village. It was sculpted in 1974 by a Christian devotee in the area. (Contributed photo)

AFTER 250 years of secrecy and severe isolation, Christian culture still exists in Amakusa.

Amakusa is located at the heart of Kyushu, southwest of Kumamoto Prefecture in southern Japan. It is an archipelago composed of around 120 islands. The nearest port of entry in getting to Amakusa from the Philippines is through Fukuoka Airport.

On July 4, 2018, the UNESCO World Heritage Committee has inscribed the Hidden Christian Sites in Nagasaki and Amakusa on the World Heritage List. Considering the outstanding universal value of the Christian culture in Amakusa, it is now one of the cultural landscapes which require protection for the benefit of all humanity.

A year ago, I had the opportunity to experience what Amakusa can offer as a destination for Christian pilgrims and nature lovers.

Francis Xavier introduced Christianity in Satsuma currently known as Kagoshima Prefecture in 1549. Trading allowed missionaries from foreign countries onboard western ships to freely spread God’s teachings. Because feudal lords were attracted to their goods, they supported their mission and some of them became baptized Christians.

Father Luis de Almeida, a missionary from Portugal, quickly propagated the Christian faith in Sakitsu, a fishing village in Amakusa which served as a valuable port for both missionaries and traders.

A total ban on Christianity was enacted in 1614. Missionaries were forced to leave from Japan and churches were demolished. Some missionaries were martyred and Christian believers were also persecuted.

In 1637, the rebellion started in Amakusa-Shimabara. Peasants were enduring ruthless suppression, heavy taxes, and famine. Amakusa Shiro, a 16-year old boy with special gifts, who believed that a free country is coming under the name of God, led the revolt. He stood as the commander in chief of the rebellion army and they fought against the army of the Shogunate for over 120 days.

Because their Christian bond was so strong, they fought until the end. The final battle was fought at Hara Castle causing the death of 37,000 of them.

The Amakusa-Shimabara Rebellion was the biggest rebellion in the history of Japan and also regarded as the largest religious war.

Hiding and revival of Christian faith

The Christians continued to practice their faith by co-existing with Buddhism and Shintoism. Referred to as underground Christians, they concentrated more in Sakitsu Village. They concealed themselves as Buddhists and parishioners of shrines while secretly practicing Christian rituals such as baptism, orasho, and praying the rosary.

Interestingly, they creatively devised religious items using substitute objects such as an abalone shell with mother-of-pearl patterns to resemble Virgin Mary, and using daily items as symbol of faith to be venerated. Buddhist icons with crucifix engraved on its back and other devotional objects with hidden code and Christian emblem inside.

Christianity was secretly kept in place for 250 years until the ban was lifted in 1873.

Oe and Sakitsu Churches were established by Father Marmand and Father Ferrie in the early 1880s. Sakitsu Church is situated on the same ground where the denunciation of Christian faith, called Efumi or test of allegiance, was carried out.

In 1933, Father Garnier rebuilt the Oe Church inspired by Romanesque architecture and a year after Father Halbout rebuilt the Sakitsu Church in Gothic style.

A five-day itinerary will allow pilgrims to explore the Sakitsu Village (this includes the Sakitsu Church, Statue of Virgin Mary on the Cape, Tomb of Father Halbout, Sakitsu Museum, and the Sakitsu Suwa Shrine), Oe Church, Amakusa Christian Museum, Amakusa Collegio Museum, the Rosary Museum, and a scenic former orphanage site with Stations of the Cross.

The legacy of faith

Apart from its advances in technology, valuable traditions, and for being one of the world’s elite in R&D and innovation, Japan is also blessed with spiritual treasures.

Amakusa is a place that can strengthen one’s Christian faith. The site will surely appeal to Filipinos. With seamless air connectivity and unique tourism products to offer, faith tourism exchanges between the Philippines and Japan will offer seemingly limitless opportunities for economic development along with appreciation and understanding Christianity through a tangible experience.

But because of Amakusa’s aged population, who will continue to nurture their Christian culture in the coming years? (Cristine Mansinares)