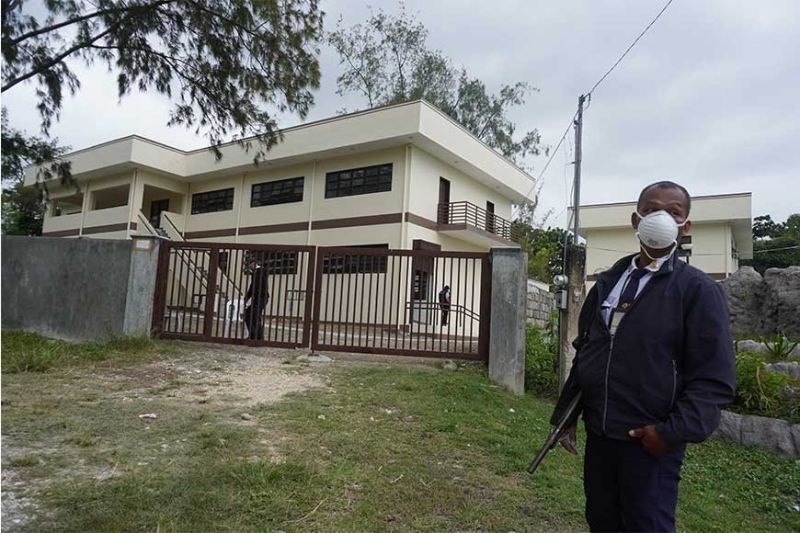 ISOLATION. After a standoff, 30 Filipinos who had arrived at the Mactan-Cebu International Airport from Taiwan Wednesday, Feb. 12, 2020, were brought to this quarantine facility in Barangay Busay, Cebu City. Cebu Gov. Gwendolyn Garcia’s Executive Order 5, issued last Feb. 3, imposes a 14-day quarantine for Filipinos and Permanent Resident Visa holders coming in from China and its Special Administrative Regions amid the threat of the novel coronavirus. (Sunstar Photo / Alex Badayos)

MORE than 70 Filipinos who arrived from Taiwan expressed their dismay at the “sudden” inclusion of Taiwan in the travel ban. They refused to be quarantined and tried to leave the Mactan-Cebu International Airport (MCIA).

Lawyer Steve Dicdican, MCIA general manager, said the 78 Filipinos caused a commotion at the airport since the airport authorities had to impose the quarantine protocols on them.

“This problem has been going on since last night (Feb. 11). We resolved it last night, but today there were still people who refused to follow the quarantine orders because they cannot accept the suddeness of the temporary ban involving Taiwan,” he said Wednesday, Feb. 12, 2020.

The affected passengers arrived around 10:30 p.m. on Tuesday, Feb. 11, when the ban was imposed immediately by the Philippine government.

Travel restrictions imposed by the Philippine government include the barring of Filipino nationals from traveling to Taiwan, including the flight and cabin crew.

The ban also covers the entry of foreign nationals, except Permanent Resident Visa holders who come directly from Taiwan, or have been there within 14 days immediately preceding arrival in the Philippines.

The passengers were flown in by Eva Air, Silk Air and Airasia, Dicdican said.

As of 8 p.m. Wednesday, some of the passengers were still in the airport holding area and were being provided with food and essential toiletries by the airline even as the airport management and the Cebu provincial government had already prepared a quarantine area for them.

However, some 30 of the passengers will undergo a mandatory quarantine in a holding facility in Barangay Busay, Cebu City after Cebu Gov. Gwendolyn Garcia ordered airport officials and local police to impose the order at the MCIA.

“We are trying to make sure that all our protocols will be followed. It’s not our decision on who to quarantine and who not to quarantine. It’s really the Bureau of Quarantine and the Department of Health. We are here to implement it,” Dicdican said.

The official said the airport could be called in to apply the law as they cannot refuse a lawful order.

One stranded passenger, who identified himself as a businessman based in Bacolod City, is contemplating on filing charges against Garcia and other officials of the Cebu Provincial 2019-nCoV Task Force for illegal detention and forcing them to undergo quarantine even though some of them just had a layover in Taiwan.

“How we are treated here (in the holding area) morag kami tanan naay virus (it seems like we are all infected with the virus),” the passenger told SunStar Cebu.

He explained that he was on vacation in Taiwan but was forced to come home at an earlier date after receiving reports that Taiwan was included in the Philippine travel ban.

The passengers from Taiwan to Cebu didn’t show any signs and symptoms of Covid-19 when they were subjected to thermal scanning at the MCIA.

But tensions rose between the passengers and airport personnel when the former were told that they had to undergo a 14-day quarantine as a requirement to enter the country.

Another passenger, who identified himself as an overseas Filipino worker (OFW) from Consolacion town, Cebu, is asking Bureau of Quarantine (BOQ) officials to release them from custody since their flight didn’t have any Chinese nationals.

The OFW said he worries for his family that is reportedly waiting for him outside the MCIA.

During the standoff between the airport officers and the passengers from Taiwan, one American national who was with the group castigated quarantine and airport officials who were securing them, saying that they were “violating” his human rights by detaining him and his family at the airport.

The American national and his family alleged that they did not disembark from the plane on the flight from the United States to the Philippines which had a layover in Taiwan.

Avigael Ratcliffe, GMR-Megawide Cebu Airport Corp. (GMCAC) spokesperson, said they were only supporting the BOQ and the Bureau of Immigration in their implementation of the travel ban on travelers from Taiwan.

She also assured that the passengers were well taken care of and were given packed lunches.

Meanwhile, Terence Anthony Bermejo, BOQ-Cebu chief, said they are just following their mandate in placing Filipino passengers coming from China, its administrative regions, and Taiwan under a 14-day quarantine.

Bermejo said those passengers who refuse to undergo the 14-day quarantine will have to stay at the airport “as long as they want and until they give in.”

Those with no homes in Cebu or those whose homes don’t meet the conditions for quarantine will be sent to identified quarantine centers in the province.

Despite the health advisory to avoid large crowds, a “penitential walk and prayer” is scheduled for this Saturday, Feb. 15, 2020, against the coronavirus disease. Dr. Rene Bullecer, board member of the Cebu Archdiocese’s commission on the laity, said the decision to proceed was made after Archbishop Jose Palma was consulted. Organizers estimate participants to number 20,000 to 50,000.

A resort-hotel in Lapu-Lapu City is offering free accommodation and food for persons being monitored for possible virus infection, regardless of nationality. Mayor Junard Chan did not name the hotel, but he said that, in exchange, the owner wants government to allow back Chinese nationals working in offshore gaming operations in the city who returned to China last month for their Lunar New Year celebration.

The Cebu City Hall brought down its budget for the purchase of protective gear from the proposed P28 million to P15 million. The City Council approved the reduced budget. The slash was not because they have beaten the virus but because some found the original amount “too large.” ( JJL, JCT, JOB, FVQ, WBS / JKV)