US admiral hopes Philippine security pact can still be saved 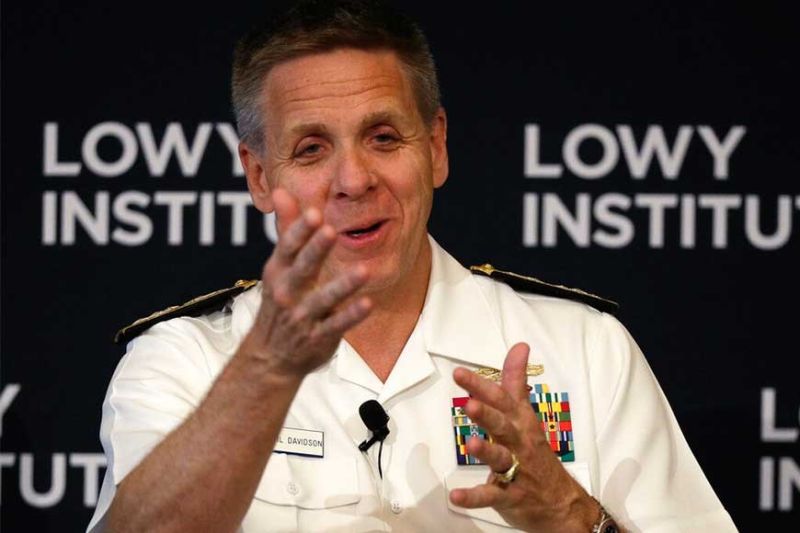 AUSTRALIA. Adm. Philip Davidson, commander of the US Indo-Pacific Command, speaks at the Lowy Institute in Sydney, Thursday, February 13, 2020. Countries that established closer ties to China in expectation of economic growth and infrastructure development "often find themselves worse off in the end," Davidson said. (AP)

CANBERRA, Austrralia -- The move by the Philippines to end a security pact that allowed United States (US) forces to train in the country potentially “challenged” future American operations with Filipino forces, a US admiral said on Thursday, February 13.

Adm. Philip Davidson, commander of the US Indo-Pacific Command, told a foreign policy think-tank in Sydney that he hoped the US State Department would be able to negotiate a solution that would keep the Visiting Forces Agreement in place.

“It’s a 180-day notice, so we have some time for diplomatic efforts to be pursued here,” Davidson said. “I hope we can get to a successful outcome."

The Philippines notified the United States on Tuesday it would end the agreement, in the most serious threat under President Rodrigo Duterte to their 69-year bilateral treaty alliance.

In Washington, President Donald Trump, when asked about the Philippines’ decision, said “I never minded that very much, to be honest. We helped the Philippines very much."

He added: “We helped them defeat ISIS. I get along, actually I have a very good relationship there. But I really don’t mind if they would like to do that. That’s fine, we’ll save a lot of money. My views are different than other people. I view it as thank you very much, we save a lot of money. But if you look back, if you go back three years ago, when ISIS was overrunning the Philippines, we came in and literally single-handedly were able to save them from vicious attacks on their islands.”

“The United States shares a long history with the government and people of the Philippines and recognizes that regional and global security is best served through the strong partnership that is enabled by the Visiting Forces Agreement,” the official said, speaking on condition of anonymity.

Davidson said the United States did not have such agreements with every country in the region.

The accord, known by its acronym VFA, legally allows the entry of large numbers of American forces along with U.S. military ships and aircraft for joint training with Philippine troops. It specifies which country will have jurisdiction over American soldiers who may be accused of crimes while in the Philippines, a sensitive issue in the former American colony.

A separate defense pact subsequently signed by the allies in 2014, the Enhanced Defense Cooperation Agreement, allows the extended stay of US forces and authorizes them to build and maintain barracks and warehouses and store defense equipment and weapons inside five designated Philippine military camps.

Senator Panfilo Lacson, also a former national police chief, said terminating the treaty would reduce the two allies’ 1951 Mutual Defense Treaty “to a mere paper treaty as far as the US is concerned.” The US Embassy in Manila described the notice to terminate the agreement as “a serious step with significant implications for the US-Philippines alliance.”

Duterte has often criticized US security policies while praising those of China and Russia, despite the Philippine military’s close historic ties with its American counterpart.

Davidson said countries in the Indo-Pacific region are beginning to take a stand against Chinese attempts to manipulate them through debt-trap diplomacy, coercion and bullying.

All nations in the region were involved in a strategic competition “between a Beijing-centric order and a free and open Indo-Pacific,” he said.

Countries that established closer ties to China in expectation of economic growth and infrastructure development “often find themselves worse off in the end,” Davidson said.

“Through excessive territorial claims, debt-trap diplomacy, violations of international agreements, theft of intellectual property, military intimidation and outright corruption, the Communist Party of China seeks to control the flow of trade, finance, communications, politics and a way of life throughout the Indo-Pacific,” Davison said.

China has scoffed at what it calls US interference in the Asia-Pacific region and has denied linking aid to politics. (AP)