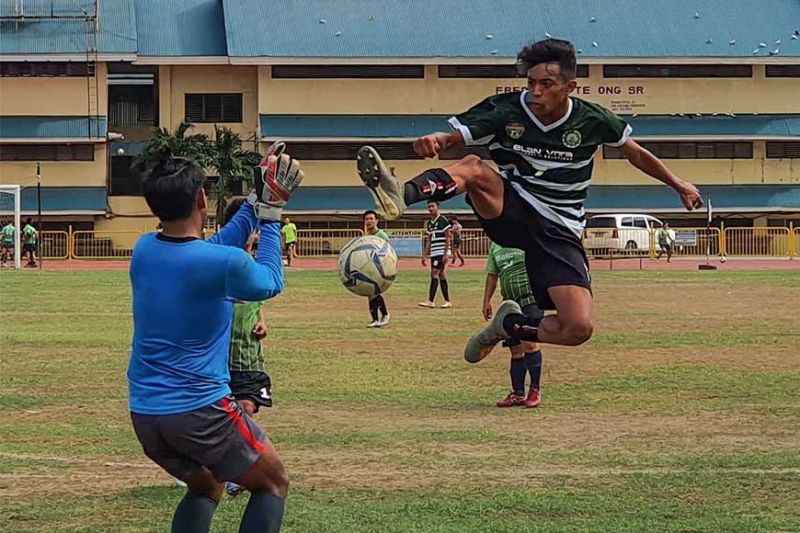 FLYING BRO. Josh Asignar tries to redirect the ball during Erco-DB’s Division 2 match against Makoto FC in the AboitizLand Football Cup. Erco won the division and is now looking to add the Division 1 title to its haul. (Sunstar File)

UNDEFEATED Leylam and Erco Bro take on each other, while Makoto FC gun for its second straight win in this weekend’s Men’s Open Division 1 action at the Cebu City Sports Center on Feb. 16.

Leylam, which currently leads the division by just one goal, will face Erco Bro in the final game, while Makoto FC will take on the University of San Carlos in the second game.

Leylam defeated USC, 5-1, in its first game two weeks ago, while Erco Bro, whose B team ruled Division 2, opened its campaign with a 3-0 win over the University of San Jose-Recoletos (USJ-R), which is not seeing action this week.

The two teams used to have a storied rivalry and figured prominently in previous editions of the tournaments when it adopted the cup type competition but Sunday’s game will be the first time the two will meet since Erco returned to the men’s open.

On the other hand, Makoto FC, which trails Leylam by one goal in the standings after its 4-0 win over Don Sacredale last week, will try to build on that momentum as it takes on USC.

In the first game, Don Sacredale is hoping to recover as it faces the debuting University of Cebu. Sacredale, last season’s runner-up to Leylam, won its first game against USJ-R, 3-2, but suffered a humbling 4-0 loss against Makoto.

Meanwhile, organizers of the Thirsty Cup have decided to postpone their annual tournament due to concerns over the spread of the coronavirus.

“After much deliberation and in adherence o the directive of the Department of Health that large events and gatherings be avoided, we are announcing the postponement of the 17th Thirsty Football Cup...With the goal of safety for all, the scare brought forth by the coronavirus poses too big a risk for the children, players, parents and spectators,” Thirsty said in its announcement. (ML with PR)