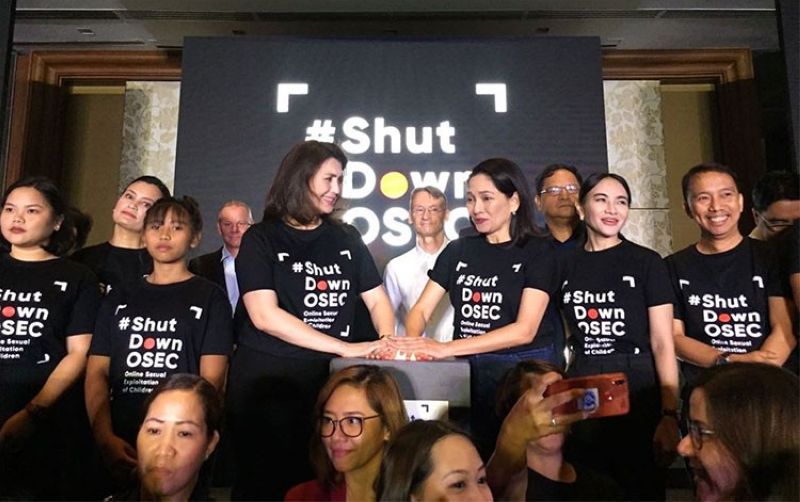 This was the rallying call of the Child Rights Network (CRN), the largest alliance of organizations and agencies pushing for children's rights legislation in the Philippines, as they launched the #ShutdownOSEC campaign on Tuesday, February 11.

CRN called on Congress to help stop Osec by reviewing and updating the current laws to encompass: appropriate definitions of Osec terms, accountability of the private sector to children, child rescue and rehabilitation, and punishment of perpetrators.

During the launch, child rights organizations, legislators, private sector, and youth representatives discussed Osec cases in the Philippines, laws invoked against it, and how various sectors in the country can contribute to shutting it down.

According to CRN, online sexual exploitation seriously damages children. It leads to depression, social isolation, and even suicide attempts. What's worse is that Osec has become a family business for some, diminishing its menace as an actual form of sexual abuse of children.

The full scale and reach of Osec in the country is unknown, but the Philippines has been described as a top global source of child sexual abuse materials.

"With the current trend, it cannot be business as usual. Technology is very dynamic, enabling the issue's prevalence. Hence, we should also be dynamic and agile in our response; we need to start working on stopping Osec now," said Romeo Dongeto, CRN convenor.

#ShutdownOSEC is a follow on activity to ChildFund Philippines and CRN's workshop with the media last December 2019, where they proposed guidelines for reporting OSEC cases in the news.

CRN noted that the Philippines has Osec cases because the country's systems have less than completely detected and prosecuted them. Despite the laws being designed to be comprehensive to punish all possible cases of child abuse, their "all encompassing nature" do not capture the commensurate punishment for Osec.

Currently, the most referenced laws for Osec are Anti-Trafficking in Persons Act, followed by the Cybercrime Prevention Act, Anti-Child Pornography Act, and the Anti-Child Abuse Act. These laws do not: clearly define Osec; punish the livestreaming of child sexual abuse; and impose obligations on private sector to prevent and stop Osec.

Consequently, latest data revealed that in 2018 alone, at least 600,000 naked and sexualized photos and videos of Filipino children were shared and sold online. Out of these thousands of cases, only 27 perpetrators were convicted in 2018.

Among those who participated in the launch were government allies Senator Risa Hontiveros, and Tingog Sinirangan Partylist Representative and House Committee on the Welfare of Children Chair Yedda Romualdez.

But more allies are needed to make sure that appropriate actions are taken on both houses of Congress, and that legal reforms will be signed into law.

"We call on our leaders in government to help us shut down Osec. We need to make sure our laws are updated to penalize violators and protect more children from the harms of Osec. Civil society cannot do it alone. We need a whole of nation approach if we are to stop this terrible crime that robs children of their future," Dongeto added.

CRN also invited the public to participate in #ShutDownOSEC campaign by learning about Osec and reporting it to the proper channels such as Bantay Bata 163, the 1343 anti-trafficking hotline, and PNP when they see it.

More details about the campaign at: www.childrightsnetwork.ph/ShutDownOSEC. (PR)