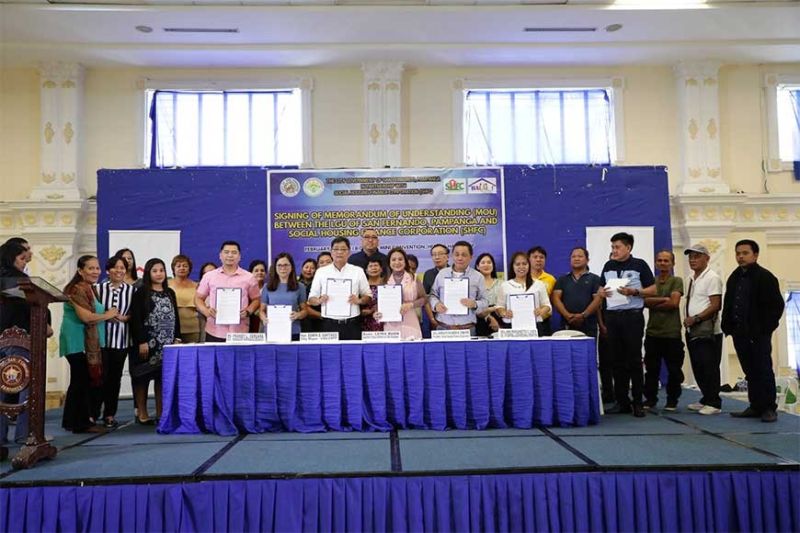 MAYOR Edwin Santiago is realizing the City of San Fernando's vision that no one will be left behind, as he signed a memorandum of understanding with the Social Housing Finance Corporation (SHFC) on February 11 at the Mini-Convention, Heroes Hall.

SHFC is the lead government agency undertaking social housing programs and aims to provide Flexible, Affordable, Inclusive, and Responsive (Fair) shelter solutions to the housing needs of the formal and informal sectors in the low-income bracket thru its Community Mortgage Program (CMP).

CMP assists legally-organized associations of underprivileged and homeless citizens to purchase and develop a tract of land under the concept of community ownership.

Lawyer Arnolfo Ricardo B. Cabling, SHFC president, said the program wants to assist residents of blighted areas to own the lots they occupy, or where they choose to relocate to and eventually improve their neighborhood and homes to the extent of their affordability.

The SHFC president also stressed that they will be putting up an office in Pampanga for the convenience of all Kapampangans. He also revealed the lowest interest rate they will offer for the housing applicants.

Meanwhile, Leira Buan, assistant secretary of the Department of Human Settlement and Urban Development, encouraged her fellow Fernandinos to believe and cooperate with the shared efforts of the national and local government.

For his part, Santiago expressed his appreciation to all partners of the city, especially to SHFC for its programs and good intentions.