1st OFW hospital in Philippines to rise in Pampanga 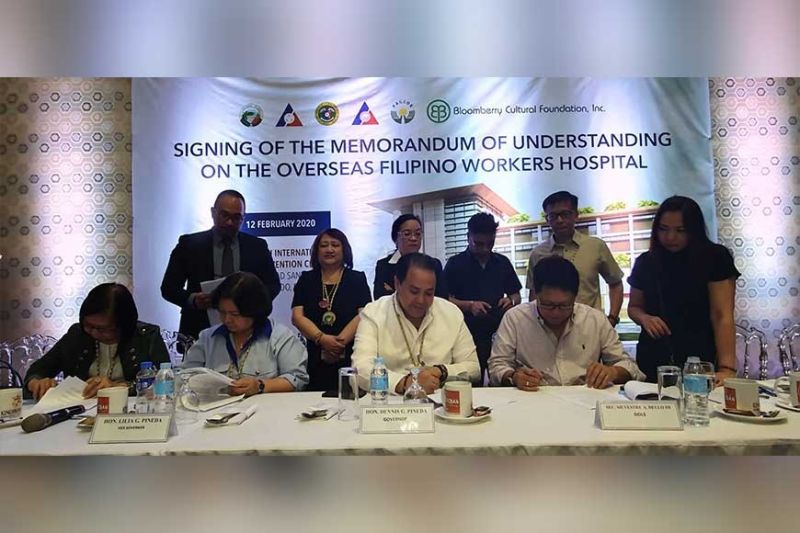 THE country's first ever hospital dedicated to the medical needs of overseas Filipino workers (OFW) will soon be realized, as funding had already been allocated for the construction of the facility in Pampanga.

The facility will rise in a two-hectare lot at the Provincial Engineering Office Compound in Barangay Sindalan, City of San Fernando that was donated by the Provincial Government.

On Wednesday, February 12, Governor Dennis Pineda, Vice Governor Lilia Pineda, Philippine Amusement and Gaming Corporation (Pagcor) Chairperson Andrea Domingo, Department of Labor and Employment Secretary Silvestre Bello III and Bloomberg Executive Director Filipina Laurena led the signing of the memorandum of agreement for the construction of the P500-million OFW hospital in a two-hectare lot worth P600 million in Barangay Sindalan in the City of San Fernando.

The hospital, with its 100-bed capacity, is expected to be finished by May 2021.

It can be recalled that to ensure continued funding of the facility, particularly the provision of adequate staff, former President and Second District Representative Gloria Macapagal-Arroyo appealed to House members from Central Luzon and the chairpersons of the committees on health and labor to author a bill creating it.

"As recommended by the Department of Budget and Management, a law is needed for the continued funding of this OFW Hospital and Diagnostic Center," Arroyo said in an interview in 2019.

Similar facilities will be built in Visayas and Mindanao.