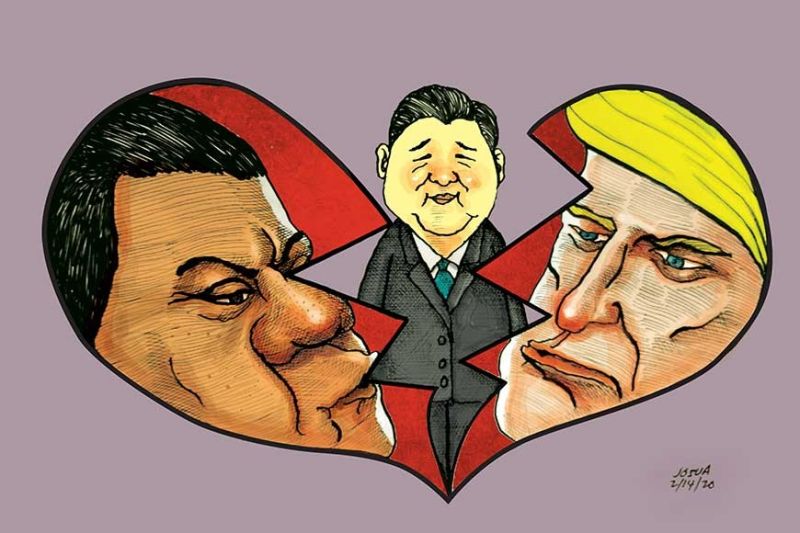 IMAGINE how maddeningly hurting it is for lovers to be dating at a time when fate declares it will eventually rip them apart.

The lovers’ rendezvous was Loridablanca, Pampanga, and we saw them Friday, Feb. 7, discreetly flying on Air Force jets like mad lovebirds perched on the clouds. Except that on that day, against the sad sunset, it was almost like they were merely keeping their love afloat amid the gravity of an impending termination of the Visiting Forces Agreement (VFA). The joint military exercise between the Philippine Air Force and the United States Air Force might be the last of the few dates in this waning relationship. At the most crucial time when the Department of Foreign Affairs had sent off its breakup letter to the US Government.

Right this minute, on Valentine’s Day, a small contingent of the Philippine Army gets anti-terrorism tutelage from the US Army in Palawan, right at the frontline where another lover looms at the West Philippine Sea. The exercise, called Balance Piston 20-1, is supposedly meant to tighten the bond, but then again fate will have it the other way.

The breakup was triggered when the US Government, through a law that sanctions human rights violators, canceled the visa of Sen. Ronald dela Rosa for his alleged indiscretions in the drug war when he was chief of the Philippine National Police. President Rodrigo Duterte reacted with a full threat to terminate the VFA and promptly ordered the Foreign Affairs secretary to send the letter.

This will be the second breakup if you remember then Senate President Jovito Salonga’s firm “The treaty is defeated” in 1991, thereby sending the old lover out of the house after a 40-year romance. But the warmth stayed, and they decided to reunite some years after, in 1999, this time with a new name, the VFA. If you’ve been irked by an over-extended television soap with its dizzying fluctuations, just think of our defense treaty with the US. It’s one saga that sags like a bad cliche.

That our senators are resounding the termination with words revolving around “renegotiation,” we’d be “zombieing” our way again to the old lover soon, it seems. Zombieing is a modern dating terminology that means the dead lover reappears, hoping to pick up where he took off. The possibilities are there, and this drunk episode might just earn a sequel.

Unless the Philippines, the shapeshifter that it is, sets its eyes on the lover down west, to China, the persistent third party in this drama. Then, yes, change is coming.

By the way, what did the old lover say when it received the breakup missive? “Oh, well, saves me a lot of money.” There isn’t much love to reckon between the lines.