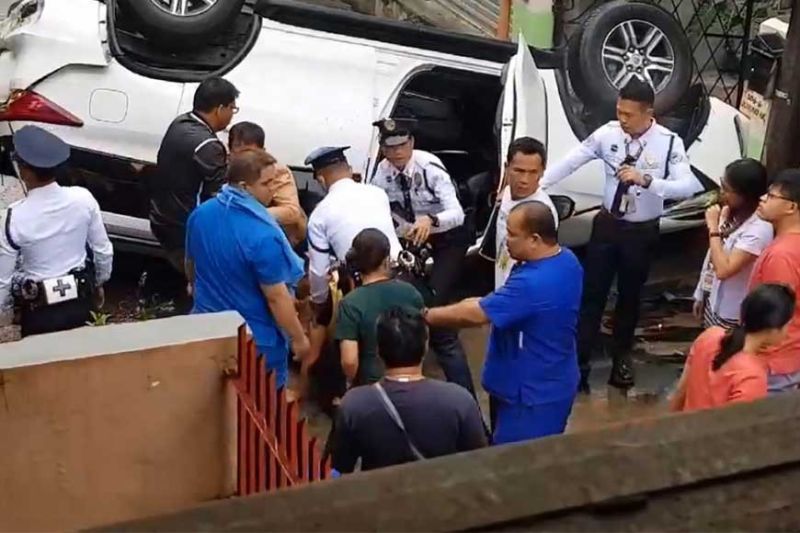 THE management of the Davao Doctors Hospital (DDH) has temporarily closed their steel carpark from the public while investigation is ongoing after a vehicle fell from the third floor of the four-story building on Thursday morning, February 13.

“To further protect the safety of our patients and the public, the Steel Carpark will be temporarily closed to the public until cleared by the City Engineer’s Office,” DDH said in a statement issued to SunStar Davao Thursday.

DDH was saddened by the accident “despite the safety measures installed at the steel carpark.”

“The hospital has taken the necessary measures to ensure that the persons involved in the said car accident are being taken care of and are currently being treated. The personnel who first responded to the incident have undergone Basic Life Support (BLS) training and have handled the situation accordingly,” DDH said.

The hospital added that an investigation is now being conducted together with the government regulatory agencies to check on the cause of the incident.

A private vehicle with three passengers onboard flipped after it fell from the four-story car park of DDH on a rainy Thursday morning, raising safety concerns on the stability of the railing of the establishment’s parking space.

Based on the report provided by Davao City Police Office (DCPO) spokesperson Police Captain Rose Aguilar, the incident involved a Toyota Fortuner vehicle which rammed the waist-level steel barrier and plunged to the ground from the third floor of the car park.

Aguilar said the accident happened at around 9:20 a.m. on February 13 at DDH’s steel parking located in Malvar Street, Davao City.

Based on their initial investigation, it was learned that the vehicle, driven by Datu Luminog Kusain Delangalen with two other male passengers, was moving up going to the third floor of the steel parking building when the driver failed to accelerate.

“The vehicle instead of moving forward suddenly moved backward and fell,” Aguilar said.

Meanwhile, as of Thursday, the passengers, including the driver, are now undergoing medical treatment at DDH and in stable condition.

In a video posted at 9:41 a.m. Thursday by a Facebook user who goes by the name Dan-Jez Vel, he was able to capture the situation while the hospital’s security personnel were pulling victims out of the flipped vehicle.

The hospital’s personnel also rushed to the scene to get the patients and treat them inside.

“Slippery ang ramp coz (because) of the rain and wala pud (there’s no) traction control iyang Fortuner grabe ang wheel spin hantud nahulog. Always remember not to park there, bahala na layo inyong maparkingan (Never park at the DDH steel car park no matter how far you will park your vehicle),” he wrote in his caption.

The incident drew public apprehension, especially for car owners. This is reportedly the second time that the same incident happened. In 2015, a driver died after his vehicle fell from the 4th floor of the car park.

On Thursday, the Department of Science and Technology-Philippine Atmospheric, Geophysical and Astronomical Services Administration (DOST-Pagasa) issued Thunderstorm Advisory No.2 at 7:45 a.m. stating moderate to heavy rain showers with lightning and strong winds due to thunderstorms in the areas of Davao Region such as Davao del Norte, Davao City, Davao del Sur, Davao Occidental, Sarangani. The heavy downpour lasted for several hours.