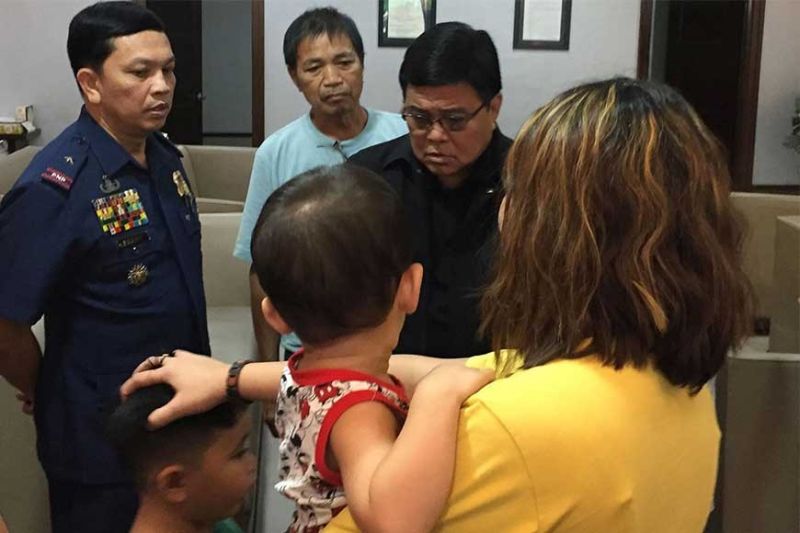 THE death of P/MSgt. Maximino Macua during a drug bust has pprompted Cebu City Mayor Edgardo Labella to consider buying additional bulletproof vests for the police.

Ferro and Labella comforted Eva Kristel, who has three children with Macua. Two of the couple’s children are twins.

Labella gave P50,000 in cash aid to Eva Kristel. He will also ask the City Council to pass a resolution providing scholarships to Macua’s children.

Presidential Assistant for the Visayas Michael Lloyd Dino said his office will also extend financial and educational assistance to Macua’s family. The National Housing Authority, he said, will give a new house to the family.

Ferro assured Eva Kristel that the PRO 7 will shoulder the burial expenses, and the family will also receive the police officer’s full benefits. The Macuas were married two years ago, but they had been in a relationship for more than a decade.

The newly installed PRO 7 chief said he cried upon knowing about Macua’s death as the latter was among the police officers who fetched him at the Mactan-Cebu International Airport in Lapu-Lapu City last week. All the Philippine flags were lowered at half-mast at the PRO 7 headquarters and in all lower units in the region as a sign of mourning following Macua’s death.

On Friday, Feb. 14, Macua’s body will lie in state at the St. Ignatius Chapel inside the PRO 7 headquarters in Cebu City. His body will be transferred to Bohol on Saturday, Feb. 15.

The burial is set on Thursday, Feb. 20, in Tagbilaran City, Bohol. The police officer was a native of Loon, a town in Bohol.

Obeso, wounded during the Tuesday encounter, was caught inside a government hospital in Cebu City. Past 11 p.m. Tuesday, Obeso’s two alleged cohorts were killed in a shootout in Quiot.

Obeso is an alleged member of a drug syndicate operating in Cebu City and other towns in Cebu, police said.

Before he joined in the operation against Obeso, Macua had not told his wife that he was about to pose as a drug buyer. He also asked his wife for her picture. She did not ask any questions; she sent him her photograph through cell phone. Eva Kristel later received the news of her husband’s death. Macua had often informed her when he was about to participate in an operation. On that day, however, Macua did not tell her about the drug bust. It was also the first time—and the last—that Macua asked for her picture. (JJL BBT & AYB)