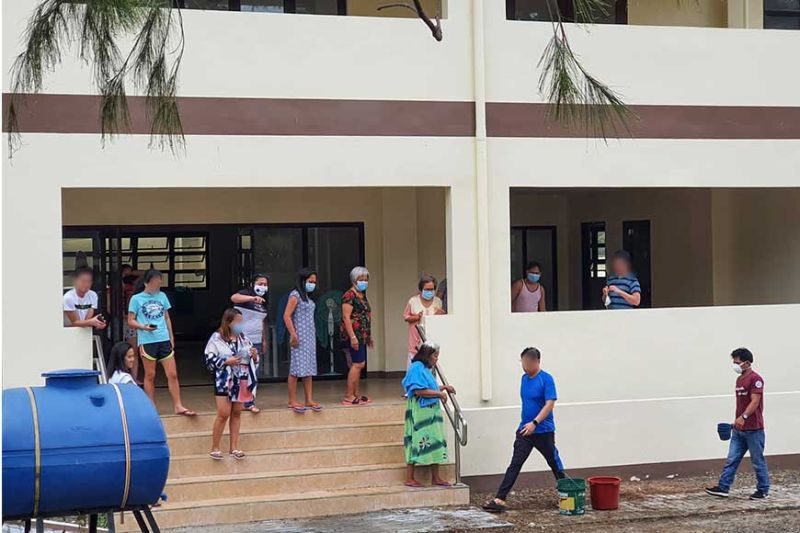 QUARANTINED IN CEBU. Some Filipinos who arrived from Taiwan this week have been put on a 14-day quarantine in an evacuation center in Barangay Apas, Cebu City. They complain that the evacuation center is dirty and has no power and water supply. Taiwan is among the list of areas with travel restrictions imposed by the Philippine government to curb the spread of the novel coronavirus, which causes the disease now known as Covid-19. (Sunstar Photos / Arni Aclao)

They’re better off leaving instead of constantly complaining about the state of the quarantine facility, she said.

Some 21 quarantined persons from Mindanao were supposed to leave on a PAL (Philippine Airlines) flight to Davao City Thursday night, Feb. 13, 2020.

Two Filipinos from Taiwan, who were placed in a 14-day quarantine in Barangay Apas, Cebu CIty, approached a SunStar Cebu photographer who was taking photos of the facility’s facade Thursday morning, Feb. 13, 2020.

Jay, not his real name, said the facility lacks electricity and water.

“Aside from that, the bathrooms are clogged. Plus, we’re not allowed to give interviews. Everything is forbidden. But if the facility’s amenities are not ready, then they should let us go. In fact, there is no proper monitoring,” he said in Tagalog.

“We are in the dark, literally. And now we’re supposed to make our travel arrangements upon our release. We are from Davao City. The local government here in Cebu has done nothing to help. They told us we are supposed to contact our LGU (local government unit) in Davao so we can go home. Please help us,” a girl who asked not to be named said.

Department of Health (DOH) Central Visayas Director Jaime Bernadas clarified that Filipinos from Taiwan who have been placed in quarantine are persons under monitoring (PUMs) and do not have symptoms of the coronavirus disease (Covid-19). There are specific quarantine instructions they have to follow under the watchful eye of quarantine personnel, he said.

Garcia said the travelers from Mindanao should have understood that the facility in Barangay Apas was all the Province could provide.

“It has water. It just so happened that we ran out. There is also electricity. We prepared as best as we can. We cleaned the facility. Maybe it’s just not up to their standard. Maybe they were expecting a mansion. At any rate, we’ve made arrangements for them to go home to Davao City and some to Iligan,” the governor said in Cebuano.

Thirty passengers were interned in Barangay Apas because the DOH facility and the Women and Children’s Center were already full. The Province offered to place them in a facility in the southwestern town of Pinamungajan, but they refused.

Garcia said some hotels offered to take them in but the passengers would have to pay for the accommodation.

She said the Province already spends not less than P300 daily for the food of each quarantined passenger, excluding their other needs.

As for the patients under investigation (PUIs), the DOH 7 said 27 were still in the hospital, while 124 persons under monitoring (PUMs) were either placed in a home or a quarantine facility.

The governor said the quarantined passengers flying to Davao City would occupy the back of the plane, with four rows separating them from regular passengers, to ensure the safety of everyone.

“I don’t know anymore. Maybe they have a ticket padung didto (going there),” Garcia said.

In a Balitang Bisdak interview, one of the passengers said the Provincial Government told them they had to shoulder their airfare if they wanted to fly home.

Meanwhile, Office of the Presidential Assistant for the Visayas Secretary Michael Dino urged overseas Filipino workers from Taiwan who refused to be placed under quarantine to heed the government order for the sake of public safety.

There was a commotion at the Mactan airport Wednesday, Feb. 12, when 78 Filipino passengers from Taiwan insisted on going home.

Some of them even threatened to file charges against airport officials and the DOH for restraining their liberty.

During a press conference at the Police Regional Office 7, Dino said that even though the passengers didn’t have fever or display any flu-like symptoms, they still had to be placed under quarantine to prevent the spread of Covid-19.

“They came from a quarantinable place, so they have to be quarantined. So I hope they also understand. This is to protect not only yourself but also the Cebuanos or the Filipino community for that matter. You’re even protecting also your family. Can you imagine, kung naa ka, dili ka magpa-quarantine. Puyo ka sa inyu. Sigurado affected ang imong tibuok pamilya (if you refused to be quarantined and it turns out you have the virus, you end up infecting your whole family),” he said.

Dino said no one wants to be placed under quarantine because it’s a lot of hassle, adding that it’s also costing the government a lot in terms of expenses.

“They probably think it’s easy to place people in a quarantine, but it’s not. But we have to do it. We have no choice. We have to bring them from the airport to the destination (quarantine facility). Once they get there, we have to take care of them. We have to provide them with food and lodging,” he said in a mix of Cebuano and English.

Airport authorities have sought the help of police after last Wednesday’s incident.

Brig. Gen. Albert Ignatius Ferro, PRO 7 director, said he has deployed a 14-man quick reaction team whose members have a medical background in the airport.

When Ferro said the police deployed in the airport didn’t have any protective gear, Dino said he would make a request from Malacañang. (WBS, ANV, AYB / PJB )