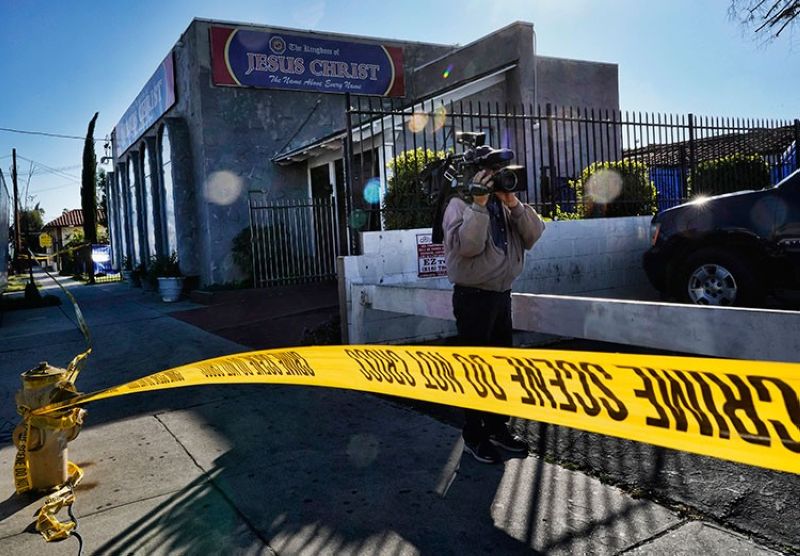 USA. In this January 29, 2020, file photo, crime scene tape is seen closing off an area around the grounds of the Kingdom of Jesus Christ Church in the Van Nuys section of Los Angeles. (AP)

LOS ANGELES -- Three officials with a Philippines-based church in Los Angeles have been charged as part of an alleged scheme to trick followers into becoming fundraisers and arrange sham marriages to keep them in the US.

Federal agents arrested the local leaders of Kingdom of Jesus Christ church during a raid last month. They were each charged Wednesday. Conspiring to commit forced labor trafficking and immigration and marriage fraud were some of the charges, the Los Angeles Times reported.

Guia Cabactulan, 59, was the church’s top official in the United States, according to the indictment. Marissa Duenas, 41, allegedly handled immigration matters as the “human resources leader” and investigators believe Amanda Estopare, 48, tracked fundraising and funneled money to the church’s leadership in the Philippines, the newspaper reported Thursday.

A magistrate judge had ordered all three women detained after their arrests last month.

Attorneys for Cabactulan and Duenas did not immediately respond to requests from the Times for comment. It was unclear from court records if Estopare had retained a lawyer.

Israelito Torreon, an attorney for the church in the Philippines, previously denied all accusations.

Torreon said the US charges stemmed from a campaign, waged by disgruntled ex-members, “to exact revenge” and drag the church and its leader, Apollo Quiboloy, “into a quagmire of shame, blatant humiliation and defeat.”

Quiboloy was neither charged nor identified by name in court documents; prosecutors and agents have referred only to the church’s “leader,” the Times said.

Workers who say they managed to escape from the church told the FBI that they had been sent across the US to work long hours soliciting donations for the church’s charity and were beaten and psychologically abused if they didn't make daily quotas, according to an affidavit filed last month in support of the charges. Some described having to live in cars at truck stops.

The immigrants essentially became full-time workers, sometimes referred to as “miracle workers,” in a crusade to raise money for the nonprofit Children’s Joy Foundation USA, which was supposed to benefit poor children in their homeland. But the complaint said most of the money raised was used to finance church operations and fund the leaders' lavish lifestyles.

The church claims a membership of six million people and backed the 2016 candidacy of President Rodrigo Duterte, a close friend of Quiboloy.

Between 2014 and the middle of last year, $20 million was sent to the church in the Philippines, the FBI said.

Investigators documented 82 sham marriages over a 20-year period between top fundraisers and church members who were US citizens. (AP)